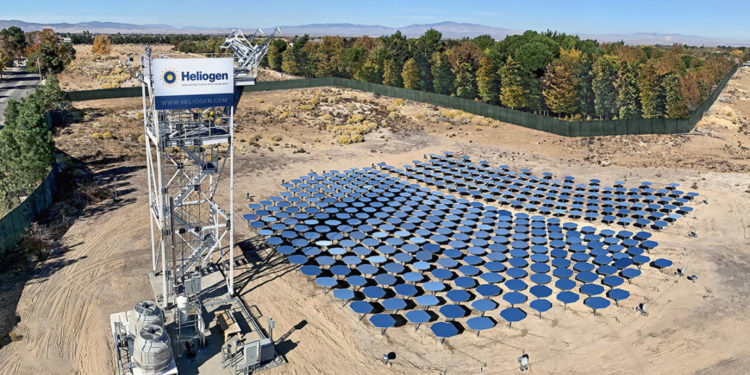 Heliogen, the clean energy company that is transforming sunlight to create and replace fuels, today announced its launch and that it has – for the first time commercially – concentrated solar energy to exceed temperatures greater than 1,000 degrees Celsius. Photo: Heliogen

Bill Gates-backed energy startup, Heliogen, may have found a way to depollute highly polluting industries like steel, cement, and petrochemical production. The company has developed a technology that can concentrate solar thermal energy to 1,000 degrees Celsius for the first time, making it possible to run industrial processes entirely on renewable energy.

The California-based startup is using an array of mirrors to reflect in order to doubles the amount of heat that previous solar thermal tech could produce by reflecting the sunlight.

While the idea is not entirely new, innovations in computing technology in recent years has allowed the tech to direct light as precisely as possible, ushering to the promising potential of Heliogen’s new solar energy generator.

“We have a series of high-resolution cameras look at a whole field of mirrors, and have all of them be pointing very precisely by looking at the position of the mirrors in real-time. And that has never been done before,” Gross said.

Previous solar energy generators can only depend on as much as 575 degrees Celsius as the highest achievable temperature to run the solar energy tech. However, industrial processes like forming cement or steel—requires kilns with temperatures of at least 950 degrees. This level of temperature, before Heliogen’s tech, is only achievable through burning fossil fuels.

“Even just by cutting fuel use during the daytime, we can make an enormous impact on reducing their CO2,” Gross says. “Some of these companies are looking for ways to cut their CO2 emissions by 1%, 2%, 3%. And if we come along and put our [equipment] next door and run during eight hours of the day, we cut it by 33%.”

With as much potential, Heliogen’s tech could promise to make a huge impact on the reduction of unrenewable energy generation.