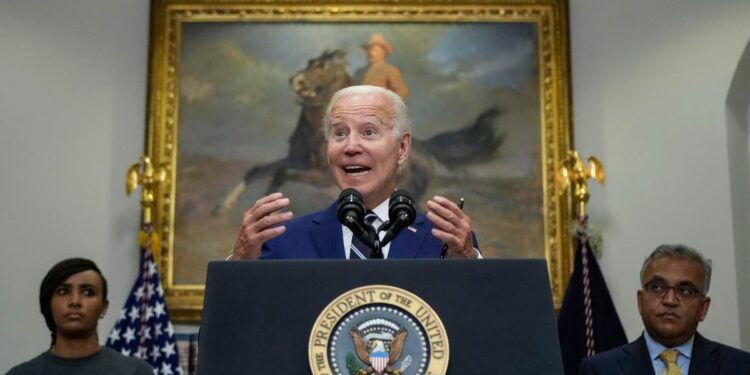 Is too much inflation crushing your summer vacation plans? President Joe Biden has a holiday for you — at the gas pump. Biden is set to request from Congress a three-month, emergency relaxation of the federal tax on gasoline. By removing that tax of 18.4 cents per gallon, and right before the July 4th peak of driving season, Biden hopes to be credited for saving you three or four bucks every time you fill up.

It’s not a huge savings. The federal gas tax hasn’t changed since 1993 and is not indexed for inflation. Still, according to the Congressional Budget Office, it brings in $45 billion a year, which covers nearly all the $47 billion last year in federal highway spending. As Energy Secretary Jennifer Granholm said on CNN, “Part of the challenge with the gas tax, of course, is that it funds the roads.” Ultimately, Congress will have to find another pocket to dig in to replace the $10 billion or so in highway funding. The move would essentially do away with a user fee burdening those who drive the most and instead socialize the cost across all federal taxpayers — including those electric vehicle drivers who dodge the gas tax today.

Biden pushed the idea back in February, but Senator Mitch McConnell derided it as a gimmick. As Jason Furman, economics professor at Harvard University tweeted Tuesday, “Whatever you thought of the merits of a gas tax holiday in February, it’s a worse idea now. Refineries are even more constrained now, so supply is nearly fully inelastic.”

President Barack Obama rejected a gas tax holiday during the oil price spike of 2008, writing in his memoir, A Promised Land, “… I was sure that consumers wouldn’t see much benefit. In fact, gas station owners were just as likely to keep prices high and boost their own profits as they were to pass the savings to motorists.”

Importantly, there’s no real mechanism for making sure that the savings goes where it’s intended — to normal people, rather than to the demonized oil companies. Alex Muresianu of the Tax Foundation notes that a tax holiday “could make the misalignment between demand and supply worse” by spurring increased demand for gas, and in turn, higher prices, which would counterproductively add to overall inflation woes.

Gilbert Metcalf, professor economics at Tufts University, summed it up in an email exchange. “As much as I understand the Biden Administration’s desire to ease the pain of higher prices, a gas tax holiday is a terrible idea. Beside giving up valuable revenue, it will increase demand and just drive gasoline prices up. That in turn will drive oil prices a bit higher – not what we want to do if we want to choke off Russia’s primary export revenue source. To dampen prices, we need to boost supply, not demand. Working with the Saudis is distasteful but important given the importance of fighting inflation and supporting Ukraine.”

Martin A. Sullivan of Tax Analysts writes that there are four good reasons for a gas tax. First, as a user fee for road repairs, one that conforms to the user-pays principle (though EV drivers skate, for now). Second, as an incentive to drive less, reducing road congestion. Third, as an effective tax on carbon emissions; 18.4 cents a gallon equates to an implied carbon price of $20 per ton of carbon dioxide emitted. Fourth, a gas tax can insulate from price shocks, by marginally reducing demand for a volatile commodity.

Sullivan marvels that given all those things a gas tax is good for, it would be counterproductive to undo them. A tax holiday would do the opposite of what we need at a time of historically tight markets for petroleum — it would encourage more driving, more congestion, more emissions, and less cash set aside for highway repairs. Even if all else stays equal, and all the savings is passed down to the consumer, removing the tax only hurts the adjustments that the country needs to make in moving to a low-carbon economy.

“If our sole goal is to tame inflation, lawmakers should rule out a gas tax holiday, tax incentives for alternative energy, and extensions of child credits,” writes Sullivan. Indeed, raising taxes would do more to fight inflation, by discouraging driving. “That’s not gonna help those lawmakers win any elections, but it is the bitter truth.”

Naturally, lawmakers on the state level are eyeing their own tax holidays, with the potential to save their people far more. State gas taxes vary from 9 cents a gallon in Alaska to more than 50 cents in Pennsylvania, Illinois and California. Already Connecticut, Georgia, Maryland, New York, and Florida have cut their gas taxes. Pennsylvania is considering reducing its 57.6 cent per gallon levy, the highest in the nation, with the thought of replacing lost revenue with state tax surplus. Likewise, Minnesota could afford to suspend its 28.6 cent tax thanks to a $9.3 billion surplus last year. California politicians seem more interested in cutting rebate checks to citizens in order to make sure any savings go directly to voters rather than oil companies. Indiana, which has already been paying out $125/month checks to people under an “automatic taxpayer refund law” is thinking of boosting that to $350 per person, per month.

As bad an idea as a gas tax holiday is, it’s better than some other counterproductive energy policies the administration has lately been considering.

Biden has been castigating oil refining companies for not making more gasoline, and wants them to “justify making $35 billion in the first quarter.” Over the weekend Biden said, “I want an explanation for why they aren’t refining more oil.” The administration has threatened to use the Defense Production Act to somehow force refiners to provide more fuel. Refiners respond that they are running near full capacity, but produce less fuel than before the pandemic because low prices two years ago forced the shuttering or conversion of plants. A Phillips 66 plant in Louisiana has been under repair since Hurricane Ida last September, others are switching over to make renewable diesel fuel. Last year Biden’s EPA killed the permits that would have enabled the continued operation of the 200,000 barrel per day Limetree Bay refinery in the U.S. Virgin Islands. Lyondell Basell plans to shutter its 263,000 bpd Houston refinery by the end of the year. Does Biden want to nationalize old refineries and subsidize their economics?

And then there’s the idea of curbing exports of domestic oil and fuels. The concept is that if we stop sending our oil and gasoline overseas we should have enough at home. A terrible idea, writes Manav Gupta, analyst with Credit Suisse. Consider that the U.S. exports some 2 million barrels per day of gasoline, jet fuel and diesel, and another 2.5 million bpd of fuel oil, propane, propylene and other petrostuff. Banning these exports would break all sorts of contracts, and “it would likely lead to massive product shortages globally. This would have a bigger impact on the global supply of products than the Russian invasion of Ukraine.” If the U.S. cut off exports to Canada, Mexico, Brazil, Korea, perhaps they would cut their trade with the U.S., which “would be viewed as an unreliable supplier.” America’s oil export ban was ended in 2015 by an act of Congress, with Obama’s signature. Biden doesn’t have the votes to push it today.

Congressional progressives have already introduced bills that would impose on oil companies a windfall tax on their profits from high oil prices. Reasonable people see that as an affront to an industry that saw the price of their commodity fall to zero just two years ago. Confiscating upside would be a surefire disincentive to America’s frackers to go drill more, which is what we need at a time when inventories are at five-year lows, the tightening of Russian exports has only just begun, and the Strategic Petroleum Reserve is being drained at a rate of 1 million bpd. (Besides, if you really want to see windfall profit margins, go look at Apple and Microsoft.)

Remember the surest fix for high prices is high prices. Indeed a quick look at the oil futures markets would lead you to believe high gasoline prices are just transitory. The West Texas Intermediate oil future is $91.70 a barrel a year from now, and below $70 in 2027. This implies faith by the market that some combination of peace in Ukraine, economic recession and supply growth will emerge to tamp down oil prices significantly. Soon enough, the best strategy for Biden could just be to do nothing and hope for the best.

Presidential inaction would be preferred by oilmen like Bud Brigham, chairman of publicly traded Brigham Minerals, which drills in the Permian basin. He laments that Biden’s moves, specifically releasing oil from the Strategic Petroleum Reserve, is “damaging to markets and to national security” because it interferes with price signals and “proportionally reduces the needed supply response — including by reducing the cash flows available for our industry to reinvest.” Says Brigham: “A hostile political narrative neuters capital investment.”

How Betting Big On Clean Energy Could Save Europe $1 Trillion