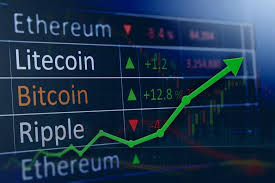 Goldman Sachs Group, Inc (NYSE: GS) officially announced it’s opening a cryptocurrency trading desk. In an interview with the New York Times, executive Rana Yared said she “would not describe myself as a true believer who wakes up thinking bitcoin will take over the world.” In November, Goldman CEO Lloyd Blankfein said “maybe bitcoin is a kind of bubble.”

In an interview with Fortune, Reddit cofounder Alexis Ohanian predicted Ethereum prices would hit $15,000 by the end of 2018 and bitcoin prices would reach $20,000 this year. Ethereum prices jumped 12 percent on Thursday after Ohanian said he’s particularly bullish on Ethereum because “people are actually building on it.”

Here’s how several top crypto investments fared Thursday. Prices are as of 3:45 p.m. ET and reflect the previous 24 hours.

The three cryptocurrencies with at least $1-million market caps that have made the biggest gains over the past 24 hours are:

The three cryptocurrencies hit hardest in the past 24 hours were:

From Acquisitions To New Hires, Coinbase Has Been Busy

© 2018 Benzinga.com. Benzinga does not provide investment advice. All rights reserved.