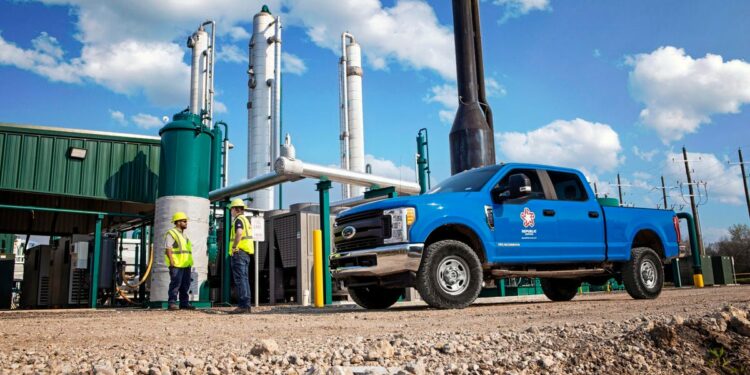 RSG
, one of the largest waste-disposal companies in the U.S., announced a major deal that will expand its renewable natural gas (RNG) business on May 5. Partnering with Houston-based RNG producer Archaea Energy, Republic will mount a $1.1 billion joint venture to develop projects at 39 of its landfills in 19 different states. Once up and running, the 39 projects are expected to generate more than 12.5 million MMBtu of RNG each year.

“We’ve been in this space for a long time,” Jon Vander Ark, CEO of Republic Services, told me in an interview last week. “We have 67 current projects. Most of those were opportunistic, and typically, our arrangement has been that we take a royalty on the asset. The developer does all the work in terms of putting in the plant and operating it, and then we have an agreement to supply a sufficient level of gas.”

But Republic will assume a larger role in the JV with Archaea. In addition to receiving a royalty on the back-end RNG production, Republic will be a 28% investor in the capital costs of the projects. “We will contribute 28% of the required capital in return for 40% equity ownership,” Vander Ark said. “So, we get very good leverage on that investment, which demonstrates the enthusiasm for developing these types of projects, and our ability to deliver outsized returns compared to self-developing.”

Vander Ark also noted that the joint venture’s portfolio will include capturing RNG from smaller landfills that would have normally been disposed of by flaring instead. “By bidding out the 39 landfills, there are projects in there that are relatively small that we probably wouldn’t do independently. But the portfolio is more attractive and that allows us to get after more of those opportunities more quickly.

The deal between Republic and Archaea comes at a strong time in the natural gas market. Austin-based analytics firm Enverus published a new report on Monday which estimates that RNG producers can realize somewhat amazing value when the proceeds from their operations are combined with the value of carbon credits they are able to access.

In an email synopsis, the Enverus report points out that “RNG projects produce low- or negative-carbon natural gas from plant and waste material, enabling them to gain access to lucrative carbon credits that can push realized prices to anywhere from $30/MMBtu to more than $100. These eye-catching numbers greatly eclipse the recent decade-high Henry Hub spot price of about $8.50/MMBtu.”

As shown in the Enverus chart above, proximity to a natural gas pipeline is a key to whether any individual landfill is a good fit for an RNG project. “We’re mindful that in a JV, everybody’s got to make money – everyone needs to be able to make a fair return on their investment,” Vander Ark said. “In selecting these 39 sites, we evaluated the feasibility both from a practicality standpoint and a cost standpoint related to the pipeline interconnect.”

Every landfill operation produces some quantity of natural gas, which is produced as the waste decomposes. As Tim Oudman, Republic’s vice president of business development described for me, recovering the gas involves the drilling of actual wells into the landfill, similar to the drilling of a vertical well into a conventional limestone or sandstone formation. “On these projects,” Oudman said, “we’re going to take the landfill gas, clean it up through a process; we’ll pull out the nitrogen, the CO2, and it will come out on the backside of the process as pipeline quality gas, which will be injected into the natural gas pipeline.”

Enverus says that “landfills represent the highest volumetric RNG potential and estimate about 1,030 MMcf/d of total possible capacity in the U.S., with a potential of 870 MMcf/d from landfills with either planned projects or are within five miles of existing gas infrastructure.”

Obviously, the growth of RNG operations is not going to solve all the world’s mushrooming natural gas supply issues. But it does serve a key role in reducing flaring and the emissions profiles of the nation’s thousands of constantly expanding waste landfill operations. It is a niche piece in the grand scheme of things, but in this mad global dash for net-zero, every niche will need to be filled.