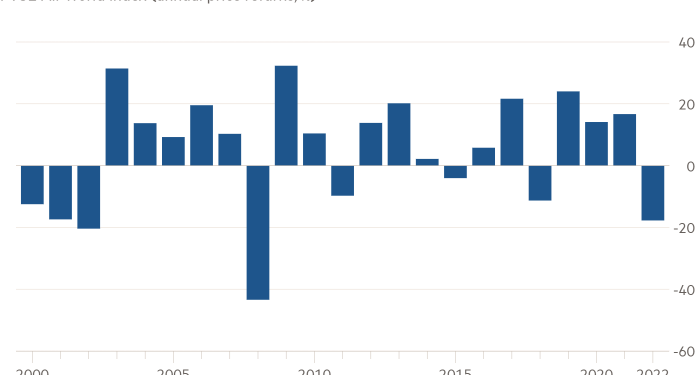 US stocks came under renewed pressure on Thursday after the worst sell-off since the early days of the pandemic, as a string of gloomy corporate earnings reports added to fears that global growth was slowing.

The S&P 500 fell 0.4 per cent in early trading after the blue-chip barometer shed 4 per cent on Wednesday in its worst sell-off since June 2020. European and Asian shares also took a knock, with the Stoxx Europe 600 sliding 2 per cent and MSCI’s Asia-Pacific index falling 1.7 per cent.

The latest market tumult comes amid mounting concern that global growth is cooling just as central banks, led by the US Federal Reserve, rapidly unwind the stimulus measures that have helped prop up the world economy over the past two years.

“This is more than just a continuation of the sell-off [from recent weeks],” said Mohamed El-Erian, chief economic adviser at Allianz and also a Financial Times columnist. “It’s not just about inflation and interest rates but we also had threats to earnings and growth.”

Cisco Systems late on Wednesday cut its full-year profit guidance. The networking equipment company said the war in Ukraine and lockdowns in China had hit sales. The group’s shares fell 9.6 per cent on Thursday, shaving $19bn off its market value.

Poor results this week from US retailers Target and Walmart had added to the dour sentiment, El-Erian said. Target led the declines on Wednesday, plunging 25 per cent after warning that its profit margins were under pressure from surging input costs, a day after its larger rival Walmart issued a similar alert. Department store Kohl’s on Thursday echoed its larger retail peers, blaming economic “headwinds” and “an inflationary consumer environment” for a fall in sales last month.

In another sign of rising concerns over the US outlook, JPMorgan late on Wednesday cut its forecast for gross domestic product growth in the second half of this year to an annualised rate of 2.4 per cent from 3 per cent previously, citing tightening financial conditions.

Long-term US government bonds rose in price on Thursday, reflecting the jolt of economic anxiety. The rally pushed the yield on the benchmark 10-year Treasury note down 0.1 percentage points to 2.78 per cent, from a high last week of 3.2 per cent. Germany’s closely watched 10-year bond yield also fell back below 1 per cent in a sign of investors seeking safety.

Despite the bearish sentiment, which has left the broad FTSE All-World share index down 18 per cent this year, some analysts said markets were pricing in too much recession risk.

“A recession is not inevitable, but clients constantly ask what to expect from equities in the event of a recession,” said David Kostin, chief US equity strategist at Goldman Sachs, adding that the Wall Street bank forecast a roughly one-in-three chance of a US recession in the next two years.

Asked about a rebound for the market, as had occurred following recent sell-offs, El-Erian added: “Before the last few weeks, you could rely on dip buyers. Now they are fewer in number and they have much less conviction.”

In Asia, Hong Kong-listed shares in Chinese internet group Tencent fell 6.5 per cent, helping to drag the Hang Seng Tech index down 4 per cent and the broader Hang Seng index 2.5 per cent lower.

Tencent’s fall came after the Chinese internet group reported its slowest revenue growth on record. The company recorded a 51 per cent drop in profits in the first quarter because of Beijing’s crackdown on the tech sector and the impact of Covid-19 lockdowns on consumer spending.