Home » Energy » Proppant Movement In Frac Casing Has Been Nailed Down, But How Important Is It Really For Shale Wells? 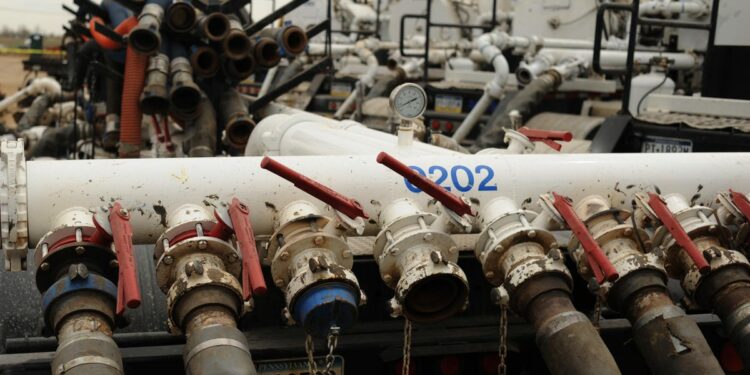 Proppant consists of sand-sized particles injected with frac fluid during a fracking operation. In shale oil and gas wells, the frac fluid is usually water with some friction reducer (like soap) added to lower the frac pumping pressure. The purpose of proppant is to stop the induced fractures in the reservoir from closing after fracking stops and the elevated pressure fades away.

In shale oil and shale gas wells, the proppant used is a mix of 100-mesh sand and 40-70 mesh sand, and these grains are both smaller than a millimeter across. Such small sand particle sizes are necessary for sand to be carried through narrow fractures in a fracture network created by the fracking operation. Larger sand would plug the network and not be injectable – that was found out in the early days of the shale revolution.

Typically, horizontal wells in shale are two miles long and are pumped with 40 separate fracking operations or stages. Each stage is roughly 250 feet long and the metal casing contains 10-20 clusters of perforations, with several perforations in each cluster. Ideally, the horizontal well is thoroughly perforated with these holes.

The flow path of a proppant grain is elusive. First the grain has to make a right-angle bend to get from flowing along the casing into a perforation. Then it’s faced with a complex fracture geometry — perhaps a main fracture that branches into subsidiary fractures, like a tree trunk spreads into branches then twigs.

Will the proppant grain be able to enter all of these fractures or are some of them too narrow? A 100-mesh sand grain may be able to squeeze into a narrower fracture when a 40-70 grain cannot.

An improvement in oil and gas production by using proppants with grain size smaller than 100-mesh has been documented, and suggests its worthwhile to get even tiny proppant grains into smaller fractures to keep them open to flow of oil or gas molecules. One such proppant is called DEEPROP.

New tests of proppant flow out of casing.

Recently some new tests have been done that investigate the flow of proppant through the casing itself, meaning a short length of horizontal casing that has been perforated to let the frac fluid out. It’s not an underground test — the piping lays on a tub at the surface and the tub collects proppant and fluid that exits the perforations.

A large number of operators have supported this project in which a variety of perf clusters with different perforation charges, designs, and orientations have been used. Different pumping rates, proppant sizes, and sand quality have been studied.

The testing hardware was as realistic as possible. The casing was 5.5 inch standard as were perforation diameters. Pump rates were as high as 90 bpm (barrels per minute), which had never been used in testing of proppant movements before.

A single fracturing stage was tested, by perforating different clusters along a pipe about 200 feet in length. Each perf cluster had its own shroud that directed the captured fluid and proppant into its own tank, so they could be measured.

These SPE papers report that the proppant escape through the perf clusters and into the tubs is uneven:

· Some proppant articles, particularly the larger mesh sizes like 40-70 mesh, sail past the first cluster perforations and don’t enter the formation until further along that stage. These larger particles have more momentum.

· Limited entry designs have been developed using just one perforation per cluster at the top of the casing.

· Particularly for larger proppant, perforations at the bottom of the casing attract too much proppant (gravity effect), and may be enlarged by erosion, so that less proppant gets to cluster perforations further along the frac stage.

Proppant exit from casing is uneven.

The interpretation given by the reports is that more of the 40-70 proppant, being larger and heavier sand grains, tends to be carried by their momentum past the earlier perf clusters before exiting in the later perf clusters, compared with the 100-mesh proppant.

This is not so ideal because the goal is to get the proppant evenly distributed across all the perforation clusters in one stage of fracking. But now to the big question of how much difference this makes?

The challenge is to optimize procedures so that proppant exit distributions are more uniform. From the reports, test results have been incorporated into a computational fluid dynamics model (SPE 209178). This approach has been built into a fracturing advisory program, called StageCoach.

Meanwhile, the reports state that “non-uniform flow of proppant in the casing can be as important as formation variability and stress shadowing.” Let’s look deeper into this.

Other sources of shale production variability.

The real question is how important is an uneven distribution of proppant to production of shale oil and gas?

The large variability of shale oil and gas wells has been documented. For example, horizontal wells in the Barnett shale of typical length 4000-5000 feet show the bottom 10% of wells make less than 600 Mcfd while the top 10% of wells make more than 3,900 Mcfd.

Several other factors are known to contribute to the wide variability of shale oil or gas flowrates.

If horizontal well length and well orientation are normalized to remove their variability, then frac stages, proppant size, and proppant amounts may be considered first-order effects. These first-order effects have been prioritized and optimized in more mature shale plays.

Then there are geological properties such as natural fractures in the shale, in-situ stress, and fracturability of the shale rock. These are considered second-order effects because they are much harder to quantify. Efforts to minimize these sources of variability include logging of the horizontal well, installing optic cable or sonic instruments or microseismic geophones to measure fracture spreading and interaction with local geology along a horizontal well.

Against these sources of variability, the casing exit distribution and uniformity of proppant appears of comparable importance to other second-order effects such as geology and stress changes along a horizontal well. There is no way that casing exit uniformity can account for production variability between 600 Mcfd and 3,900 Mcfd as observed in the Barnett Shale.

To say this another way, the critical thing is to get proppant exiting from most of the perf clusters, and into the created fractures. This has been achieved by pumping very small proppant, 100-mesh or 40-70 mesh (and often both) and optimizing the proppant concentration and amounts for a particular shale play.

This is 90% of the goal which has been achieved with remarkable success in the shale revolution of the last 20 years. So its hard to see from the new surface tests that minor variability in proppant exits from one to another perforation cluster could have a first-order effect on oil or gas production.

But maybe results from other tests, different tests, in this project will reveal more significant effects on shale production.

As Guyana’s Oil Business Booms, Could A Potential New Deal With Exxon Loom?