Home » Cannabis » Marijuana Retailer MedMen Is Near an All-Time Low — Is the Stock Ready to Rebound? 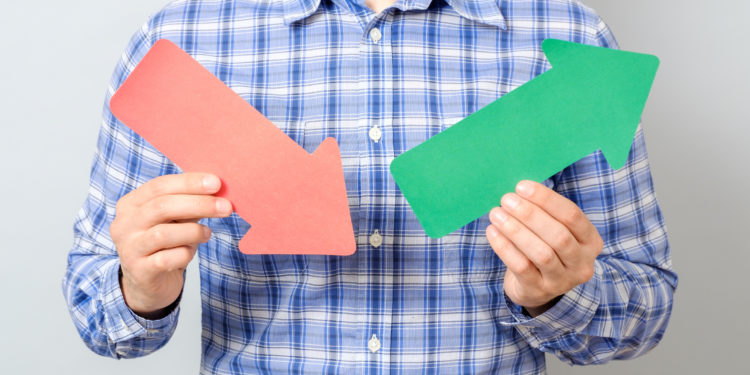 Many marijuana stocks have gotten off to a great start in 2019. MedMen Enterprises (NASDAQOTH:MMNFF) isn’t one of them.

The leading U.S. marijuana retailer has seen its stock fall in the first few months of the year while several other marijuana stocks have soared by 50% or more. MedMen’s share price is even near an all-time low. What’s behind MedMen’s malaise? And is the beaten-down marijuana stock ready for a rebound? 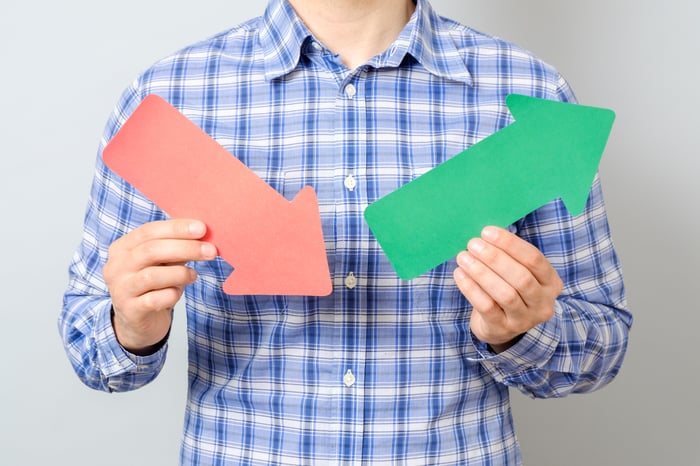 One reason why MedMen is performing dismally so far in 2019 is that the company has been embroiled in controversy. MedMen was kicked out of the New York Medical Cannabis Industry Association in February. This action came after the company’s former CFO, James Parker, alleged in a lawsuit that MedMen executives created an environment that tolerated “racial, homophobic, and misogynistic epithets and slurs,” as well as abuse of drugs and alcohol. MedMen denied these allegations.

Later in February, another controversy emerged. OTC Markets Group, which runs the over-the-counter exchange on which MedMen’s shares trade in the U.S., raised questions about certain promotional activities made on MedMen’s behalf.

The problem was that Winning Media included some statements in the article that encouraged investors to purchase MedMen stock. OTC Markets Group’s policies don’t allow companies with shares listed on its OTC exchanges to engage in any promotional activities that use sensational language to describe growth prospects.

MedMen ultimately directed Winning Media to pull all promotional materials and to stop any further promotional efforts on its behalf. However, the company was unable to determine if trading activity increased due to the article published by Winning Media.

Perhaps most importantly, MedMen stated that neither the company nor any key insiders sold shares during the period when all of this was going on. That’s key because some unscrupulous companies and individuals can engage in what’s called a “pump and dump” scheme. In such schemes, a stock is “pumped” using wildly optimistic promotional efforts, driving the share price higher. Those behind the scheme then “dump” their shares, making a quick profit.

MedMen commented publicly about the controversy last week. The company’s explanation of what happened appears to show that MedMen didn’t attempt a pump-and-dump effort. However, the negative publicity over the situation took a toll on MedMen’s share price.

Don’t think that these controversies are the only factors behind MedMen’s share price hovering near its all-time low. The biggest reason for MedMen’s poor stock performance is illustrated in the following chart. 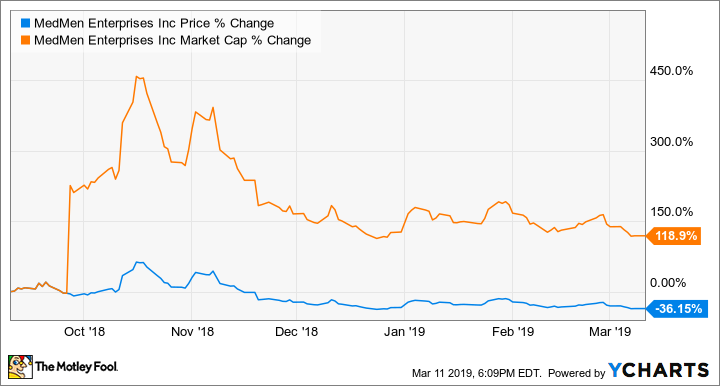 Over the last six months, MedMen’s share price has plunged. But during the same period, its market cap has more than doubled. There’s one simple explanation for this gap: dilution.

MedMen continues to finance its operations and expansion efforts by issuing new shares in bought-deal financing transactions. Its latest such deal closed in December, when MedMen issued more than 13.6 million new shares to raise around $56 million.

These transactions are the easiest way for MedMen to raise additional cash. However, every new share that the company issues dilutes the value of existing shares.

Time for a comeback?

Despite the distractions, some remain optimistic about MedMen’s prospects. Analysts even think that MedMen’s share price could double within the next 12 months.

The company hopes to close later this year on the biggest acquisition ever in the U.S. cannabis industry. MedMen is buying PharmaCann for $682 million. CEO Adam Bierman views the deal as “a transformative acquisition that will create the largest U.S. cannabis company in the world’s largest cannabis market.” With the PharmaCann acquisition, MedMen will have operations in 12 states that together account for over half of the U.S. population.

MedMen’s biggest market is in California. The state’s recreational marijuana market got off to a rocky start in 2018. However, as the market improves, MedMen is poised to benefit.

The company could also win if other major states legalize recreational marijuana. One of the top possibilities is Illinois, where efforts are underway to advance legislation to legalize recreational pot. If these efforts succeed, Illinois could eventually become one of the biggest legal marijuana markets in the world, with projected annual sales between $1.69 billion and $2.58 billion.

So is MedMen ripe for a comeback? Maybe so. However, the company remains unprofitable. More bought-deal financing transactions could be on the way. Until MedMen is in a position where investors don’t have to worry about dilution, my view is to take a pass on this marijuana retailer.