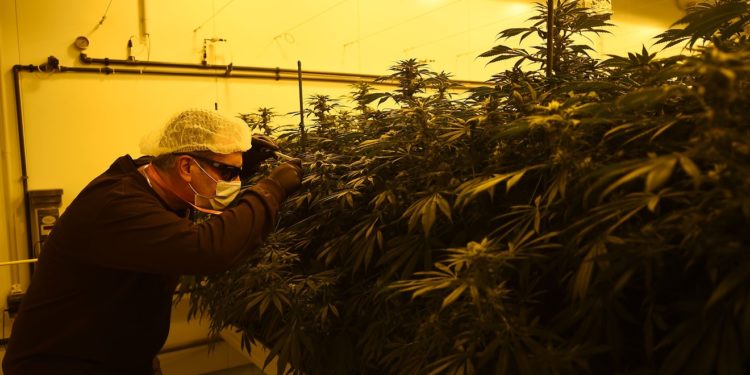 “The company’s large cultivation footprint, capable of producing over 575,000 kg, provides ACB with the necessary infrastructure to weather early storms in adult use while continuing to grow higher-value revenues in the medical market,” analysts led by Vivien Azer wrote in a note.

Cowen is expecting the Canadian recreational and medical markets to represent a total addressable market of about C$12 billion by 2025. It expects the international medical market to grow to $31 billion by 2024, up from a previous estimate of just $9 billion.

Aurora’s presence in 23 international markets should boost its ability to capture global market share, said the note. Cowen is expecting Aurora to generate revenue of C$305 million in fiscal 2019, rising to C$742 million by fiscal 2020 and to C$1.34 billion by fiscal 2022.

shares reversed early losses to trade up 7.6%, after Cowen initiated coverage of that stock with a market perform rating and C$29 price target, that is just above its current price of C$28.56.

Don’t miss: How the unsteady rise of the pot industry has made dime bags a billion-dollar business

Also: How marijuana companies can profit without selling pot

“We like CRON’s story as an asset-light, global low-cost producer with operational support and significant invested capital from Altria Inc.,” Azer wrote in a note. “However, valuation prevents us from taking a more constructive position at this time.”

Also Tuesday, medical cannabis information website Leafly said a data team working with Whitney Economics estimates that legal cannabis has created more than 211,000 jobs across the U.S., about 64,000 of which were added in 2018.

The cannabis workforce rose 21% in 2018 and 44% in 2018, according to their research and is expected to climb at least another 20% in 2019. Because of the continued federal ban on cannabis, the U.S. government does not officially count cannabis jobs, nor are they included in official statistics or economic reports.

In Colorado, a House panel advanced a bill that aims to open the state’s $1.4 billion-a-year recreational and medical market to new sources of public and private capital, as MJBizdaily.com reported.

“The lack of investment opportunity is the single-biggest burden we have,” Shannon Fender, director of public affairs of Native Roots, one of Colorado’s largest marijuana operators, told the committee’s public hearing.

See also: Washington moves closer to delivering protections for banks that work with the pot industry

was down 2.2%, after the company acknowledged that it had engaged a firm called Wining Media LLC to provide public relations and communications for the company, that included promoting its stock through ads on Google and Yahoo Finance, along with an article on a website called marijuanastox.com. The company’s former finance head alleged in a lawsuit that it had hired a consultant to prop up the stock, a claim the company initially dismissed as baseless.

For more, see: MedMen cuts fundraising round nearly in half, as CFO quits

But MedMen said late Monday that after receiving inquiries from OTC Markets Group, it looked into the matter and discovered Wining did use statements that “encourage investors to purchase the stock of the company.”

“The company has concluded, upon investigation, that, in this instance the article was not approved according to the company’s internal procedures,” it said in a statement.

MedMen “disclaims any potentially exaggerated or misleading statements contained in the materials,” and has instructed Wining to remove all promotional materials from the public domain and to cease all promotional efforts on its behalf. It acknowledged that it has hired five separate companies to provide investor relations, PR services and marketing including the promotion of its securities in the past year.

Elsewhere in the sector, Tilray Inc.

was down 0.8% and Aleafia health Inc.

was up 6%. OrganiGram Holdings Inc.

See: People in states where marijuana is legal are eating more cookies and ice cream

was up 3% and the ETFMG Alternative Harvest ETF

and the Dow Jones Industrial Average

For all of MarketWatch’s coverage of cannabis companies, click here.