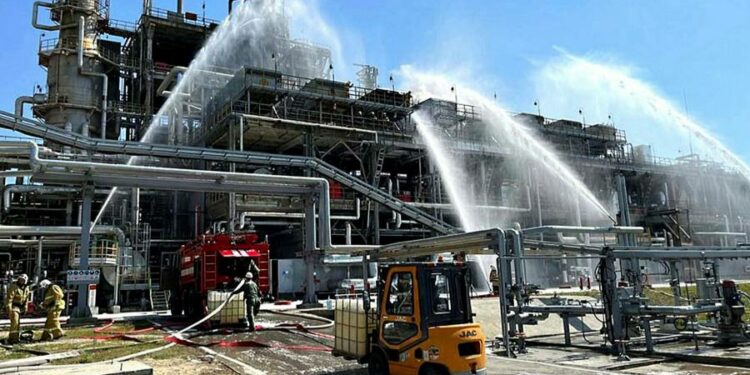 A fire broke out at an oil refinery in southern Russia’s Rostov region after a drone attack, state media said on Wednesday, in what military experts suggest could be part of apparent Ukraine-backed strikes behind enemy lines.

The fire was sparked by a drone that flew into a heat transfer unit, state newswire Tass reported, citing two unnamed sources.

Russia did not directly accuse Ukraine of the attack, though one of the Tass sources said two drones were spotted near the plant. Vasily Golubev, the regional governor, wrote on Telegram that workers had found fragments of two drones at the refinery.

Video of the crash posted by Baza, a channel on the Telegram messaging app, showed a drone flying high over the Novoshakhtinsk refinery before crashing into it and prompting an explosion. The fire ranged over a 50 square metre area before firefighters put it out, emergency services said. No casualties were reported.

While the precise type of the drone remains unclear, Ukraine Weapons Tracker, a respected open-source intelligence group, said it appeared to be based on a Ukrainian-made reconnaissance drone modified to carry explosives. The explosion took place about 150km behind the front lines close to the border with Ukraine.

Russia has accused Ukraine of carrying out a series of strikes on its territory in recent weeks, targeting fuel depots, military installations and infrastructure vital for supporting Russian supply lines. Ukraine has not admitted it carried out any of the attacks but has used them to mock Russia on social media.

A post by Ukraine’s 72nd Mechanized Brigade read: “For some reason, the Novoshakhtinsk Oil Refinery is on fire in Russia,” later adding that hitting such a target with a “kamikaze drone” 150km deep into the enemy-controlled territory is “not bad!”

“It is hot in the Rostov region,” Ukraine’s armed forces wrote in one Telegram channel post, adding: “It is best to smoke in designated places and to not throw cigarette butts on oil depots.”

Ukrainian forces have recently launched several dramatic counter strikes, including the sinking of a Russian vessel that was reinforcing Snake Island in the Black Sea and, according to Russian officials, some Russian-operated gas rigs off the coast of Crimea.

On land, Ukrainian forces have also made some creeping military gains towards the Russian-held city of Kherson.

The attacks have come as more potent western weapons systems start to arrive in Ukraine, and may be part of a Ukrainian strategy to punch back at Russian forces which continue to make steady gains in the Donbas, where most of the fighting is at present concentrated.

Some of Ukraine’s western backers are reluctant to provide Kyiv with more sophisticated military equipment it could use to attack targets on Russian territory for fear Moscow could use the strikes as justification to escalate the conflict.

Video: Volodymyr Zelenskyy: ‘No one is humiliating Ukraine. They are killing us’