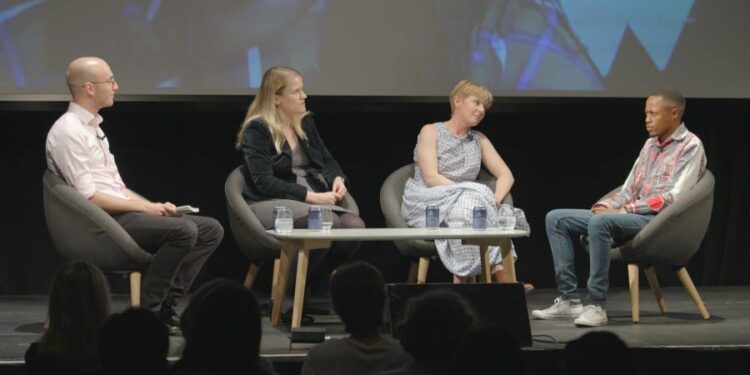 Last week in London, two whistleblowers bound by a common experience and a single company came together in solidarity. Frances Haugen rose to prominence in 2021 as a whistleblower from inside Facebook, now known as Meta. Daniel Motaung, a 30-year-old South African law student, is less well-known but worked as a content moderator for the company in Kenya through a third-party firm called Sama.

The two were meeting at an event organised by Motaung’s lawyers, Foxglove. Individually, they provided a striking contrast. Haugen is a fast talker, adept at bringing stories back to her expertise in technological systems. Motaung, wearing jeans and a bright shirt, spoke at a more measured pace.

Although he is a natural orator, Motaung had to take a break halfway through the evening as he was overwhelmed by the burden of his post-traumatic stress disorder, which he developed after the grim work of moderating distressing content on Facebook. But he returned to the stage and stayed until the end.

In recent years, the social media giant has faced a series of allegations about its harmful impact on society and democracy, including from whistleblowers who risked their careers and reputations to speak out. Most, like Haugen, have been Silicon Valley engineers who helped build the company’s algorithms and moderation systems, and speak from a position of relative privilege.

But it is rarer to see whistleblowers from the company’s other, invisible workforce of about 15,000 people, often located in developing countries. Content moderators such as Motaung are often required to sign non-disclosure agreements forbidding them from sharing details of their work even with their families.

For work confronting imagery of human sacrifice, beheadings, hate speech and child abuse, Motaung and his colleagues at Sama, an outsourcing firm in Nairobi where he worked, were reportedly paid about $2.20 (£1.80) per hour. “When I went to Kenya, I was fine. I went to [work for] Facebook… I came back broken,” he told the London audience.

The event highlighted several stark differences in Haugen and Motaung’s experiences taking on one of the world’s most powerful companies. As Haugen acknowledged, “I got the benefits of the race and gender issues. I think it would be very difficult for Facebook to come after me at this point because it would be a huge PR liability for them.”

By contrast, Motaung was fired from Sama after demanding better pay, working conditions and mental health support. Sama claims Motaung violated company policy. He returned home to South Africa due to his visa status, and has struggled to find another job since. Meta says it did not employ Motaung and denies that it operates in Kenya at all. His lawyer, Cori Crider, who had joined Motaung on stage, said Facebook had not reached out. “It’s just silence,” she said.

Speaking out against injustice in your workplace is never easy. A woman I talked to later that evening said she was moved to tears by the panel discussion. She had worked with several whistleblowers and knew they often regretted what they did and shrank from the limelight afterwards, for good reason. The fact that Motaung was clearly struggling to cope yet said he would blow the whistle all over again, was rare, she told me. “That’s courage.”

As for Motaung, he said he had only one question for Meta’s boss Mark Zuckerberg. “Will you intervene in Nairobi? You say you didn’t know. And so I’m telling you. Now, you know. Go and take care of it. Do what’s right.”