Home » Technology » How the world went wild for Wordle 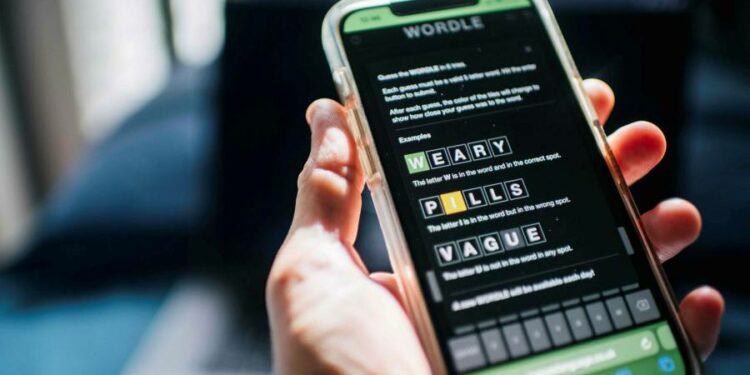 You might not have come across Wordle. It is possible that if you aren’t on social media and don’t know anyone with a compelling need to prove how clever they are on a daily basis, you might never have seen the mysterious grid of grey, green and yellow squares indicating how quickly someone else guessed a five-letter word.

But in two years’ time, when Netflix airs its 90-minute cultural retrospective about the craze surrounding this humble internet word game, you, the discerning FT reader, might enjoy this piece. The rest of us can gather around and warm ourselves at the bonfire of the nation’s redundant Scrabble boards as we consider whether Wordle can endure beyond its splashy debut.

In a pandemic, time is molasses, so perhaps it is meaningless that, as recently as November, the browser-based interface had just 90 daily players. By last week, it was reportedly reaching more than 2m a day, an R rate to rival a new variant.

For the dwindling number of uninitiated then, what is the point of Wordle? It is to guess a five-letter word within six tries. Each guess must be a valid word, and after each try it is revealed which letters are correct and in the right place, correct but in the wrong place, or incorrect. Every day is a brand new Wordle dawn and when you have solved one you are prompted to share your coloured grid (with the letters removed to prevent spoilers) with your friends and rivals. Tempted?

My first real life Wordle conversation happened just last weekend and involved three men having a heated dispute over which word should be one’s first guess in order to maximise efficiency. Another friend posted on Twitter that he’d rather give up his password than share his “Wordle starter”. The puzzle editor at the Times offers tips on how to improve your score; the Guardian ran a column explaining the linguistic history of commonly used consonants. Every morning, new Wordlers offer up their completed grids with a mixture of shame and pride to an indifferent audience.

As social media once again divides into two defiant camps, the sharing that keeps the game alive has already moved underground. One day last week I received four unsolicited images in my DMs. All Wordle scores. I know what you’re thinking — and I’m not sure there’s much difference in motivation.

Wordle’s secret, of course, is its lack of novelty. It is hangman crossed with the 1970s code-breaking game Mastermind. If you worked out how to crack that peg board, Wordle will not present you with many problems. Its inventor ascribes its popularity to its simplicity, masking complex thought processes: “Even though I play it every day, I still feel a sense of accomplishment when I do it . . . It makes me feel smart and people like that”, he told one reporter.

Satisfying puzzles with clever solving tactics have strange traction and people go wild for them. Remember the Sudoku frenzy? They’ve long driven obsessive loyalty, hence their power in the daily newspaper market; legendarily, the first rule of print is “never mess with the crossword”. In these more hard-headed times, we call them “engagement drivers”.

But Wordle remains free of this rampant commercialism. Its origin story is probably the most romantic thing I’ve ever read — NYC hipster Josh Wardle makes a gift for his puzzle-obsessed partner, she tells the New York Times it’s how he shows his love. Nora Ephron is looking down from her throne of infinite wisdom saying, “Good work, pal”. He takes no advertising, he didn’t even build an app because he’s not keen on “attention-grabbing” or the data suck up. You play once a day and that’s it. You just watch a clock countdown until tomorrow’s puzzle is available.

What could be more endearing or indeed more wholesome? The last “pure thing” on the internet, as Wordle has been dubbed, has inevitably attracted a host of predators.

Last week, an unscrupulous, or entrepreneurial, young man decided to put Wordle into an app, and indeed an App Store, with a $30 subscription for unlimited puzzles. Despite his protestations of innocence roughly as credible as those from the Downing Street party unit, Apple removed it. More in keeping with the spirit of the enterprise, several free games inspired by the original have popped up. Queerdle has a pink background and a more demotic lexicon. Sweardle — yes, you’ve got the gist.

The game’s code-breaking characteristics have made it equally as popular with the mathematically minded as with linguists. One day, after the rampant commercialisers, an engineer extracted Wordle’s source code to discover all the 2,500-odd words in its database. Congratulations to the man who can win on the first try, every day: you have utterly misunderstood the assignment.