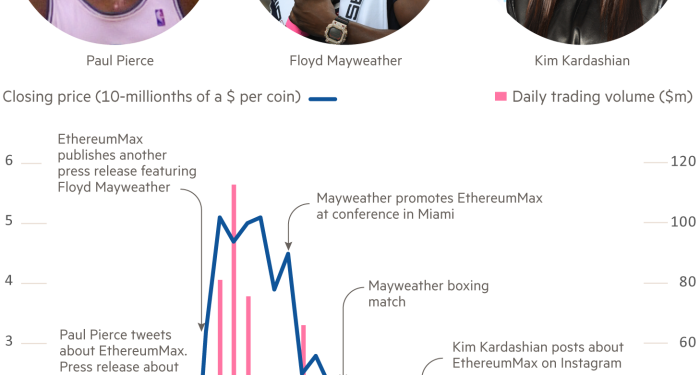 “Are you guys into crypto????” Kim Kardashian asked in an Instagram post last summer, drawing her 250m followers’ attention to a new coin known as EthereumMax.

The post by the reality TV star may have made financial-market history with its reach, outstripping cryptocurrency promotions and endorsements from dozens of other big-name celebrities. But a week after the message, the tokens had lost 70 per cent of their value. The price never recovered.

Now, these losses are at the centre of a lawsuit that claims Kardashian and other celebrities, including boxer Floyd Mayweather and former NBA player Paul Pierce, helped inflate the token’s price as part of a scheme that enriched its backers at the expense of ordinary investors.

“The emerging cryptocurrency sector is unfortunately plagued by so-called influencers who promote incredibly risky ‘get rich quick’ type of investments to their audience and fans,” said John Jasnoch, partner at Scott and Scott, who brought the class-action case.

The complaint, filed in a federal US court earlier this month, also alleges the backers of EthereumMax used the inrush of cash from Kardashian’s followers to sell a significant amount of the tokens at a profit, pocketing their gains before the price cratered.

Lawyers for Kardashian declined to comment on the claims. EthereumMax, which has no affiliation with the Ethereum network itself, said: “We dispute the allegations and look forward to the truth coming out.”

Mayweather and Pierce did not respond to requests for comment.

The lawsuit comes at a time when the explosion of retail trading during the pandemic has increased the influence of celebrity endorsements in financial markets.

“More and more retail investors . . . are [trading] based on very non-traditional routes of information, whether it’s on Reddit or on Instagram. These things are brand new,” said Charles Whitehead, professor at Cornell Law School.

An October survey by consumer research firm Cardify found that for cryptocurrency holders, mainstream celebrities and executives are the number one source of information. Almost 60 per cent of survey respondents turned to these high-profile individuals for information on cryptocurrencies more than half the time.

And celebrities have become an increasingly important source of validity for the volatile tokens. In a document released by EthereumMax in October, the brand listed its celebrity and influencer marketing as a top strength of the token.

Many other well-known individuals have publicly joined the crypto fray as digital asset markets have boomed. Actors Matt Damon, Lindsay Lohan and Steven Seagal, and director Spike Lee are among those with crypto partnerships.

“It’s considered easy money,” said an executive at a crypto marketing agency, who asked not to be named, adding that the endorsements are often pushed by talent agents who will offer deals that include posts by several of their high-profile clients, with price tags ranging from tens of thousands to millions of dollars. “You ain’t seen nothing yet.”

Mayweather, who featured EthereumMax alongside other brands on his shorts at a major fight in June against YouTube megastar Logan Paul, said in an interview at the time that the logos alone brought in a total of $30m.

Chris Chapman, partner at law firm Mayer Brown, noted that, “for now, the promotion of most crypto assets is only lightly policed”. But both the US Securities and Exchange Commission and the UK’s Financial Conduct Authority have issued warnings about influencers promoting crypto coins.

Celebrity messages about crypto assets are often followed by sharp rises in trading activity, analysts say. On May 26, Pierce posted “@espn I don’t need you. @ethereum_max I made more money with this crypto in the past month then [sic] I did with y’all in a year.” The following day, trading volumes in dollar terms in EthereumMax quintupled.

From May 24 to May 29, the price of EthereumMax surged more than 1,400 per cent to a record high. By June 12, the price had fallen 85 per cent. Two days later, Kardashian shared her Instagram message. Trading activity jumped in its wake, and the price eventually tumbled.

UK regulators have previously flagged Kardashian’s messages related to EthereumMax. In a September speech, the head of the FCA, Charles Randell, said Kardashian’s Instagram post “might have been the financial promotion with the single biggest audience reach in history”.

But despite the rapidly increasing popularity of crypto products, regulation on their promotion lags behind that of traditional financial instruments in many jurisdictions. Gary Gensler, the SEC chair, this summer called crypto the “Wild West” as he urged Congress to give his agency additional powers to protect investors.

At the same time, consumers’ understanding of crypto investments has trailed behind their rising prominence. Seventy per cent of crypto traders have been invested in the tokens for less than a year, the Cardify survey found, and 85 per cent reported they did not fully understand their holdings.

The influence extends beyond crypto markets. More than half of American Generation Z and millennial investors said they had made investment decisions as a result of information they saw on social media, according to a survey by US financial app M1 Financial.

As regulators rush to keep abreast of market hype, crypto market participants predict the role of celebrity endorsers will only grow, particularly given the rising popularity of non-fungible tokens (NFTs) whose value is often based on desirable endorsements.

The sports world, already heavily involved in brand partnerships, has been notably linked to the promotion of cryptocurrencies. Basketball player Stephen Curry, American football stars Tom Brady and Rob Gronkowski, golfer Tiger Woods and NFL top draft pick Trevor Lawrence are among the athletes with affiliations with specific tokens or crypto exchanges. Lawrence signed a multiyear deal with crypto management app Blockfolio ahead of the draft, and was paid part of his signing bonus in cryptocurrency.

Curry and Brady both serve as “ambassadors” for crypto exchange FTX, the company that paid $135m for naming rights to the Miami Heat basketball team’s stadium, and received equity in the company. Nascar star Landon Cassill became the first driver to be fully paid in cryptocurrency in July.

“You have a situation where a lot of [crypto] players have a lot of money in the space,” said Pam Kramer, the chief marketing officer of crypto brokerage Voyager, the crypto partner of Gronkowski and Cassill. She noted the firm’s main priority was educating customers and said celebrity endorsements were not their main marketing focus. But for the sector, “somebody who already has a following is a way of connecting with audiences, or building and deepening a connection with existing audiences”, she said.

Whitehead at Cornell Law School said celebrities with these widespread followings might not always be well advised when it comes to highly lucrative sponsorship deals with potential legal consequences. “It’s a question of whether the people who are giving the advice are familiar with securities law,” he said.

“It’s one thing to endorse a lipstick and another thing to promote a crypto asset,” said Whitehead. Given the profile of EthereumMax’s promoters and this lawsuit, he said, “hopefully people will now understand”.