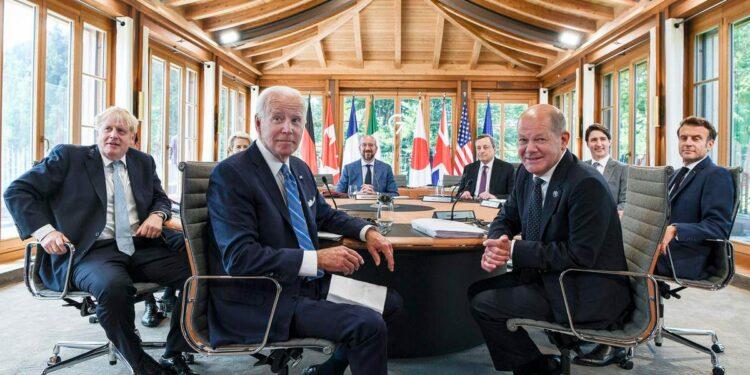 On Sunday, U.S. President Joe Biden and the rest of the G-7 leaders discussed a plan to invoke a global price cap on Russian exports of crude oil. It was a display of unbridled hubris rarely matched in modern times.

The Washington Post reported that during a conference call with reporters, an unnamed senior Biden administration official “said the leaders were finalizing details and were “very close” to urgently directing their nations’ relevant cabinet ministers to create a system to set a global price cap for Russian oil shipments to countries outside the European Union, the United Kingdom, the United States and other G-7 nations.”

So, let’s think about that for a second. The first problem that immediately comes to mind with such a global plan is the incredible complexity that would be involved. In creating such a system, the cabinet ministers of these 7 nations would have to develop a process that would somehow be able to trace oil volumes that flow out of Russia via a myriad series of pipelines, trucks and tankers ships and ultimately become commingled with millions of barrels of oil from other exporting and producing countries every day.

Just last week, the U.S. government expressed concern that volumes of Russian oil might even still be making their way to America as they end up being blended with oil produced in other countries during the refining process in India and elsewhere. How are you going to track all of that, and why would the government of India even bother to try?

Granted, the G-7 is a powerful coalition with great influence, but there are other powerful coalitions of nations, all of which have their own compelling group and national interests to protect. There is, for example, the G-8, which includes the nations of Japan and Russia, the target of the G-7 proposal. There is also the G-20, which adds powerful nations like China, Mexico, Indonesia, South Korea, Turkey, Saudi Arabia and India to the G-8 membership.

Then there is the BRICS group of nations (Brazil, Russia, India, China and South Africa), which held a summit of its own last week. These five powerful nations are home to 3.2 billion people, and represent some of the most productive economies on Earth. Just like the members of the G-7, these nations have their own compelling national interests to look after, as well as their relations with fellow member, Russia.

In addition, both China and India have become key oil trading partners with Russia over the last year. It seems unreasonable to expect these countries to just surrender on their own national interests to accommodate those of Europe and the United States and Canada. Yet, their cooperation – especially that of China and India – would be absolutely crucial to making any such global price cap plan viable.

The Washington Post report goes on to note that “Many details of the G-7 plan remained unclear, however, including what the price cap will be, how it will work and how long it will take the leaders to come to a final agreement and implement the plan.” Well, yes, of course the details are unclear, including which of the 188 nations that are not members of the G-7 might be willing to cooperate with any such plan.

It all brings to mind the popular myth about ancient King Canute of England, who in his hubris, supposedly tried to command to the ocean tides to “cease”. It was a power he obviously did not possess, and in fact admitted so to his subjects. In their effort to trace Russian oil flows and cap prices paid for them, the G-7 leaders are likely to discover they possess no more power to do this than King Canute had to control the waves.