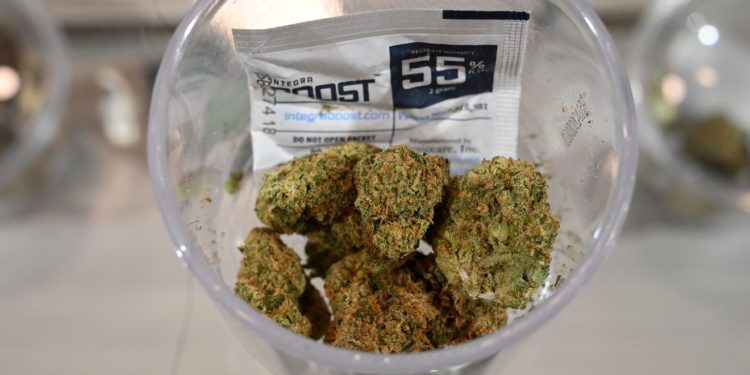 Cannabis stocks were higher Monday, as investors reacted to the latest tie-ups in the sector and awaited the release of quarterly earnings from Tilray Inc. after the close.

were up 0.8%, ahead of the company’s fourth-quarter earnings, which are expected to signal whether or not the company can actually sell pot. The company’s third-quarter numbers came just two weeks after Canada legalized cannabis on Oct. 17, and showed they had not sold any recreational cannabis. Chief Executive Brendan Kennedy has said the fourth quarter would change all that.

Meanwhile, the company has acquired Canadian licensed cannabis producer Natura Naturals for $26.3 million in cash and stock, which will likely double its domestic cultivation capacity. It signed a distribution partnership with big pharma and a product development pact with big alcohol in the form of Anheuser-Busch InBev SA

And it has acquired hemp foods maker Manitoba Harvest for $317 million in cash and stock.

surged 7.7%, after the company said it’s acquiring Nevada-based Acres Cannabis for about $70 million in cash and stock. Acres has 269,000 square feet of cultivation facilities and the ability to expand further on its 37 acres of land in Amargosa Valley, Nev. The company also has a 19,000-square-foot dispensary in Las Vegas.

The deal will give Curaleaf an additional 42,000 square feet of climate-controlled greenhouses and 227,000 square feet of outdoor cultivation. The facility currently under construction is expected to generate 100,000 pounds of dry flower a year once it has scaled up. Curaleaf is paying $25 million in cash and $45 million in stock and will make further payments if certain financial goals are exceeded.

said Monday it is selling its Rare Pediatric Disease Priority Review Voucher for $105 million. The company, which was the first to receive U.S. Food and Drug Administration approval for a cannabis-based drug, received the PRV when it was developing that drug called Epidiolex, a treatment for seizures associated with two types of rare childhood epilepsy.

The PRV program aims to encourage companies to invest in R&D for rare pediatric diseases. The buyer is entitled to a priority, expedited review, with the aim of helping to bring drugs to market that treat rare diseases.

“The sale of the PRV provides an important source of non-dilutive capital to help advance our pipeline and to continue to invest in the EPIDIOLEX commercial launch in both the U.S. and Europe,” GW Pharma Chief Executive Justin Gover said in a statement. Shares were last down 0.7%.

slid 0.1%, after the company said it has hired Baker Tilly as auditor, replacing PricewatherhouseCoopers, who resigned on March 5. The company said it would not make the April 1 deadline for filing its 10-K for fiscal 2018 ended Nov. 30 and will apply for a management cease trade order to allow trading in its stock to continue.

See now: How the unsteady rise of the pot industry has made dime bags a billion-dollar business

The news comes just weeks after Namaste fired its CEO for cause, after discovering self-dealing in the sale of its U.S. subsidiary in 2017. The company has launched legal action against Sean Dollinger for damages and disgorgement.

In regulatory news, former U.S. House Speaker John Boehner, a longtime cannabis critic who surprised investors last year when he announced he was joining the board of cannabis company Acreage Holdings and said his thinking on the subject had changed, said the U.S. government should get on board with legalization. Speaking at SXSW with the head of Acreage Kevin Murphy, Boehner said he was convinced of the merits of medical cannabis when he met a Navy SEAL who suffered from repeated concussions and was prescribed opioids. Unwilling to risk addiction, he was living with the pain, which only went away when he was introduced to cannabis.

Their presentation was heckled throughout by protesters, who criticized Boehner for a long record of voting to oppose criminal justice reform, civil rights, LGBTQ protections and environmental protections. The politician was also criticized for being yet another white entrepreneur seeking to profit off cannabis, while large numbers of people of color are still stuck in the prison system for nonviolent cannabis-related crimes.

In Alaska, Gov. Kevin Meyer signed a bill to legalize recreational cannabis consumption at licensed dispensaries, the first such regulation in a U.S. state, as the Juneau Empire reported. The regulations will allow cannabis distributors to apply for a special on-site use endorsement and meet standards set by the Marijuana Control Board. They will then be able to add cannabis lounges in separate areas from the retail store.

was up 9.7% CannTrust Holdings Inc.

was flat and OrganiGram Holdings Inc.

was up 1.5% and the ETFMG Alternative Harvest ETF

was flat and the Dow Jones Industrial Average

Additional reporting by Max A. Cherney in San Francisco

For all of MarketWatch’s coverage of cannabis companies, click here.