Home » Energy » California Risks Missing Its Climate Targets. Here’s How It Can Get On Track And Add Billions In Economic Growth. 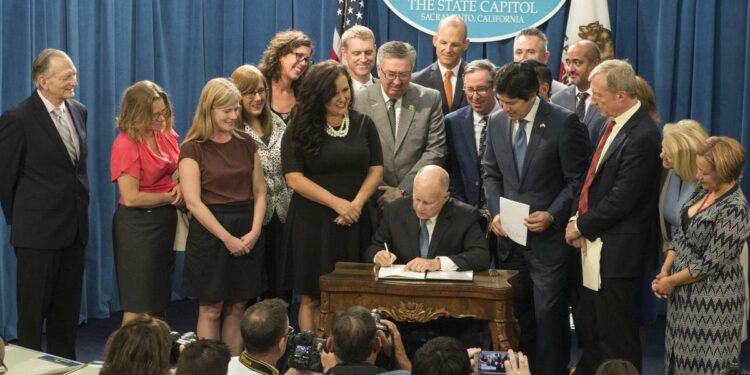 California Risks Missing Its Climate Targets. Here’s How It Can Get On Track And Add Billions In Economic Growth.

California has been a global climate leader, inspiring other countries and states to adopt even stronger policies, but the Golden State has fallen off track for its own emissions reduction targets. For a state already experiencing extreme climate impacts, rapidly cutting planet-heating emissions is more than a matter of reputation—California’s very way of life is at stake.

Unfortunately, the state’s recently released draft climate plan bets California’s future on unproven technologies—but it’s not too late for the state to get back on track.

California passed its landmark climate bill AB 32 in 2006, which set a goal of reducing statewide emissions to 1990 levels by 2020. The state met this goal four years ahead of schedule in 2016, then set a more ambitious target of 40% reductions by 2030, followed two years later by a historic 100 percent clean energy bill and a carbon neutrality by 2045 target.

But Energy Innovation’s modeling shows California’s existing policies would only cut emissions 45% by 2045, and must triple its historical rate of emissions reductions. That won’t happen without new policy action.

AB 32 charged California’s Air Resources Board (CARB) with creating an economy-wide “Scoping Plan,” charting the policy and technology path to meet the state’s climate targets. The plan is revised every five years to reflect new policy or technological innovation, but that means the 2022 plan is California’s last chance to get hit its 2030 goal and get on track for 2045—and why it’s so critical CARB gets this plan right.

The 2022 Draft Scoping Plan, released in May, focuses on the 2045 carbon neutrality target at the expense of how to meet the 2030 goal—a mere seven and a half years away. It also leans too heavily on nascent carbon capture—no facilities exist in California—and on direct air capture, which the International Energy Agency still considers in the “prototype” phase. More than 70 environmental groups have called this plan “a setback for the state and the world.”

California’s net-zero by 2045 goal leaves it just 23 years to completely switch its energy supplies from fossil fuels to clean energy. Switching to proven clean technologies as soon as possible is critical because every new fossil-fueled car, home, or building locks in emissions for decades.

Fortunately, CARB can still revise its draft plan before the end of this year, with Energy Innovation research serving as a guide to the most impactful policies.

Energy Innovation modeling shows accelerating the state’s clean electricity goal and electrifying vehicles, appliances, and manufacturing would cut emissions 47% by 2030 and a whopping 70% by 2035—well on the path to carbon neutrality by 2045. California’s investment in clean energy would also boost the state’s economy by around $30 billion every year between 2030 and 2035.

Volatile fossil fuel costs mean this clean energy transition would also save every Californian household around $1,500 per year in 2030 and up to $2,400 per year in 2035. Slashing toxic air pollution would also save lives and provide relief to the state’s most pollution-burdened communities. But to realize these benefits, the state’s climate plan will need to recalibrate to focus on near-term policies using proven clean technologies.

Energy Innovation used the open-source, peer-reviewed California Energy Policy Simulator to model three policy scenarios and their effect on the state’s emissions, economy, and public health. Existing climate policies, called the “business-as-usual” scenario, would only reduce emissions 22% below 1990 levels by 2030 and 29% by 2035. A second scenario added likely near-term policy actions, such as the all-electric, light-duty car sales standard CARB is currently considering. Even with these new policies, California would only reduce emissions 29% by 2030 and 42% below 1990 levels by 2035.

To help the state achieve its climate goals, Energy Innovation developed a “Deeper Decarbonization Scenario” prioritizing near-term policy actions and proven emissions-slashing technologies like electric vehicles and renewable energy. This policy package would cut emissions 47% by 2030 and 70% by 2035 in a down-payment for a carbon neutral future.

The Deeper Decarbonization Scenario’s most effective policy is a zero-emissions vehicle (ZEVs) standard, requiring 100 percent of new cars and light-duty trucks sold be ZEVs by 2030, and 100 percent of heavy-duty freight trucks sold be ZEVs by 2035. Because transportation is the largest share of California’s emissions, these policies alone provide 29% of the Deeper Decarbonization’s emissions reductions.

CARB could immediately act on this recommendation through its current Advanced Clean Cars II rulemaking, which is already proposing a 100% ZEV standard by 2035. Moving this target up five years would capture the emissions-reduction potential of vehicle electrification.

An industry performance standard to jump-start clean industry is the next most impactful policy. Switching industrial fuel to electricity and hydrogen provides 24% this policy package’s emissions reductions. This doesn’t require new technologies—we can start today with the easiest-to-electrify industries. California’s food and beverage processing industry is the state’s third-largest industrial user of natural gas, just after oil and gas extraction and petroleum refining. Since it uses low temperature heat, food and beverage processing is a top candidate for near-term switching to electricity.

A clean appliance standard requiring all-electric home and building appliance sales by 2030 would secure 15% of this scenario’s emissions reductions. CARB is already considering ending natural gas space and water heating equipment sales, and the California Energy Commission (CEC) could set an all-electric building code in the next code update in 2025. California’s cities have led the way on this front with more than 50 municipalities adopting codes that either discourage or prevent new natural gas hookups, so CARB and the CEC should make this the state’s consistent policy.

All of these policies would require building new renewable energy, installing vehicle charging infrastructure, expanding transmission lines, and investing in higher-quality buildings. These clean energy investments would add about $30 billion to the state’s economy per year between 2030 and 2035, and create 170,000 new jobs in 2030, peaking at 196,000 new jobs in 2036. Just transition policies will be necessary to ensure communities historically reliant upon or harmed by the fossil fuel economy benefit from high-quality jobs paying fair wages.

More efficient appliances and electric vehicles would also save Californians money even as volatile oil and gas prices continue rising. The Deeper Decarbonization Scenario policies would save every Californian household an average of $1,500 per year in 2030, reaching $2,095 per household in 2035. With America’s highest gas prices, this relief can’t come soon enough.

For a state where pollution and climate change burdens are often placed on disadvantaged communities, these climate policies would help rectify historical injustices—if designed to ensure no one is left behind.

A safer climate for all Californians

The 2022 Draft Scoping Plan discounts strategies that are known to cut emissions, and depends on nascent technologies that could very well not materialize as planned—a highly risky strategy. But CARB still has time to recalibrate and identify early action opportunities for accelerating emissions reductions before the end of year deadline.

California can get on track to meet its climate targets using readily-available technologies that are proven to cut emissions, while saving Californians money and protecting their health. With worsening drought, heat, and wildfires, the state must take decisive action now.