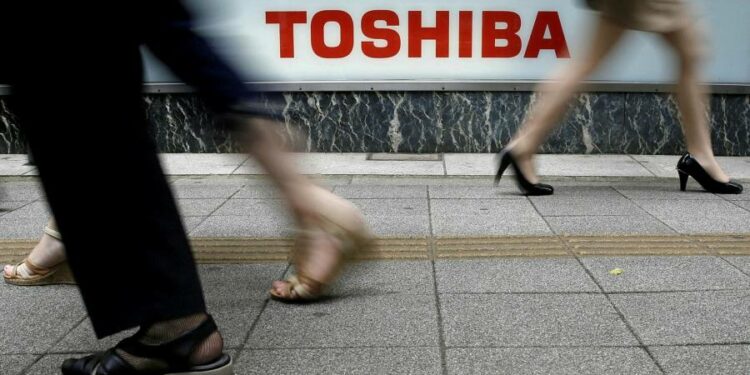 Toshiba may be about to make history for the second time. Foreign buyout groups may reportedly offer up to ￥3tn ($22bn) for the troubled Japanese conglomerate. If a deal goes through, it would be Japan’s biggest takeover. The second largest would then be Bain’s purchase of Toshiba’s memory chip unit four years ago.

The weakness of the yen increases foreign buying power. This should make foreign takeovers easier. They have been scarce in Japan, despite low valuations stemming from conglomerate discounts. Cultural hurdles and government reluctance are to blame.

Buyout offers are hardly new to Toshiba. In the past few years, the group is believed to have walked away from several generous approaches. This has been a flash point for investors. Showdowns between Toshiba and foreign shareholders, many of them activists, have been one result.

Why would now be any different? Perhaps because the yen hit a 24-year low against the dollar on Wednesday. The value of the currency has plunged by a quarter against the dollar since the start of last year. That makes Japanese companies and assets very cheap, while putting pressure on the local consumer economy.

Rumoured bidders include Apollo, Bain, Blackstone, CVC and KKR. A price of ￥7,000 ($51) per share would represent a premium of a quarter to Wednesday’s closing price.

There are parallels with the 2016 takeover of troubled Japanese group Sharp. That deal involved pushbacks and delays too. Taiwanese buyer Foxconn worked on the $3.8bn takeover for over five years. The transaction only gained momentum in 2015 when the yen hit its lowest level in 13 years against the dollar amid Bank of Japan monetary easing.

Toshiba has a poor record of squeezing export benefits from local currency weakness. Its shares trade well below the group’s sum-of-the-parts valuation. Analysts believe chip unit Kioxia should be valued at $30bn or more. That implies Toshiba’s 40 per cent stake is worth $12bn. The value of the stake in yen is ￥1.6tn, two-thirds of Toshiba’s current market value of ￥2.5tn. Its other main business units include infrastructure systems, energy systems and printing.

For foreign buyout groups, the trick will be to present a takeover of Toshiba positively: not as a capitulation by Japan, but a move to improve the efficiency and dire corporate governance of a legacy business. Otherwise, the flood of bids may prove to be no more than another false dawn for foreign capital in Japan.

California Risks Missing Its Climate Targets. Here’s How It Can Get On Track And Add Billions In Economic Growth.