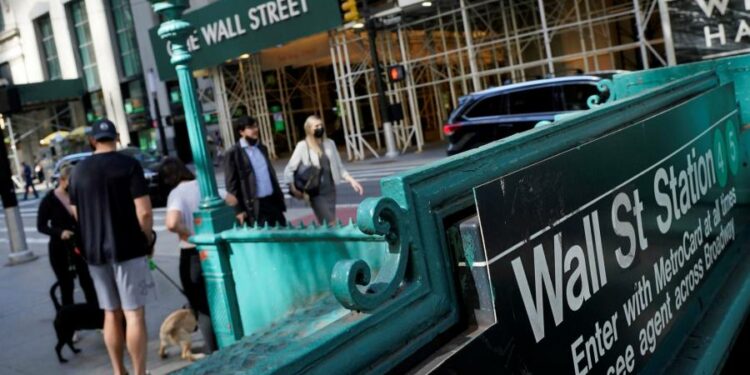 US stocks dipped and Treasury bonds rose on Thursday as investors sought to navigate a tricky outlook for global equities marred by inflation and signs of slowing growth.

The S&P 500 index fell 0.6 per cent, closing at its worst level since March 2021, while the tech-heavy Nasdaq Composite fell 0.3 per cent. Both gauges had come under heavy selling pressure in the previous session, with the S&P shedding 4 per cent in the worst sell-off since June 2020 and the Nasdaq tumbling 4.7 per cent.

Earlier in the day, both stock indices had risen into positive territory. The swings on Thursday reflect the deep uncertainty among investors over the outlook for growth and inflation at a time when central banks, led by the US Federal Reserve, are unwinding the stimulus measures that have helped prop up the world economy over the past two years.

Disappointing earnings reports in recent days from big US companies including retailers Walmart and Target and networking group Cisco have shown how corporate America is struggling with headwinds including soaring input costs, the war in Ukraine and cooling growth in China.

However, many investors and Wall Street banks still expect the US economy to dodge a lasting downturn in economic output.

“A recession is not inevitable, but clients constantly ask what to expect from equities in the event of a recession,” said David Kostin, chief US equity strategist at Goldman Sachs, adding that the Wall Street bank forecast a roughly one-in-three chance of a US recession in the next two years.

Still, JPMorgan late on Wednesday cut its forecast for gross domestic product growth in the second half of this year to an annualised rate of 2.4 per cent from 3 per cent previously, citing tightening financial conditions.

Long-term US government bonds rose in price on Thursday, reflecting the growth jitters. The price gains pushed the yield on the benchmark 10-year Treasury note down 0.03 percentage points to 2.85 per cent, from a high last week of 3.2 per cent. Germany’s closely watched 10-year Bund yield also fell back below 1 per cent in a sign of investors seeking safety.

The drop in US yields put the US dollar under pressure. The dollar index, which measures the greenback against six other currencies, slipped by nearly 1 per cent, while the euro and the pound both rallied by 1.2 per cent.

Britain’s FTSE 100 index, which is packed with exporters that benefit from a weaker pound, led European markets lower on Thursday with a 1.8 per cent fall. The region-wide Stoxx Europe 600 declined 1.4 per cent.