VANCOUVER, British Columbia, Jan. 6, 2017, WCTXF, LIC, /PRNewswire/ — LiCo Energy Metals Inc. (“the Company” or “LiCo”) (TSX-V: LIC, OTCQB: WCTXF) would like to provide shareholders with an update to the announcement from Tuesday, January 3, 2017 wherein the Company entered into a non-binding Letter of Intent (LOI) with Durus Copper Chile Spa (“Durus Copper”), of Santiago, Chile whereby LiCo can earn up to a 60% interest in the Purickuta Lithium Exploitation Concession (the “Purickuta Project”) located within Chile’s Salar de Atacama, the world’s largest and purest active source of lithium.   The LOI, when superseded by a definitive option agreement, will require LiCo to make cash payments totalling USD$8.4 million, issuing 5 million shares and making work and development commitments during the term of the option agreement.

The Company’s shares were halted from trading after the announcement on January 3, 2017 as the TSX Venture Exchange (“Exchange”) deemed the transaction to be a fundamental acquisition pursuant to Exchange Policy 5.3 (“the Policy”). In accordance with the Policy, the Company has now filed the required documents and trading has resumed. The transaction is subject to Exchange approval. 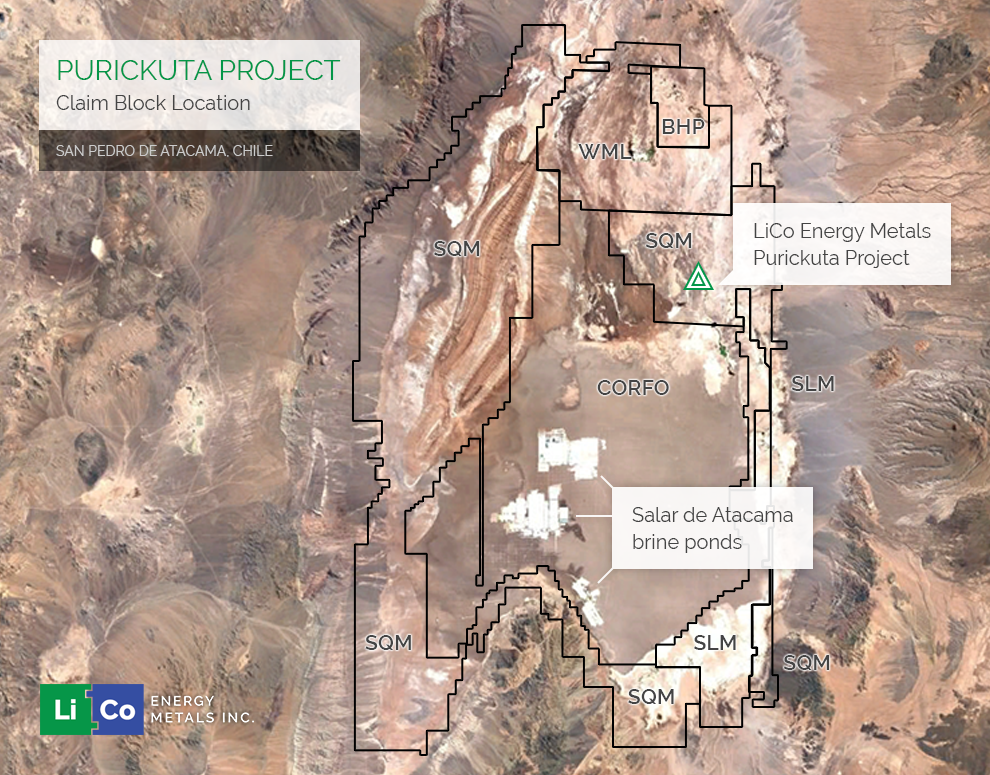 The Purickuta Project exhibits many highly desirable and key acquisition attributes, including:

2) the overall project size fits well within the capability of a junior company seeking to quickly define reserves and establish production facilities;

3) the property is well situated within the Salar de Atacama, the highest-grade lithium salar in the world;

4) within the Salar de Atacama, lithium brines exist within 140 feet of surface resulting in low costs of exploration and extraction;

6) the Purickuta Concession is close to power, labour, communications, transportation and other infrastructure.

The Company intends to undertake a preliminary resource definition program upon receipt of the National Instrument 43-101 report, which is expected to be completed in February, 2017.

“We are excited about the opportunity to earn a significant interest in a lithium concession located in the world’s most prolific lithium brine deposit, Chile’s Salar de Atacama.  Having two lithium giants, SQM and Albemarle, as neighbours in the salar gives us confidence that we will be able to develop this concession alongside our Chilean partner, Durus Copper, for the benefit of our shareholders.” says Tim Fernback, LiCo’s Chief Operating Officer. 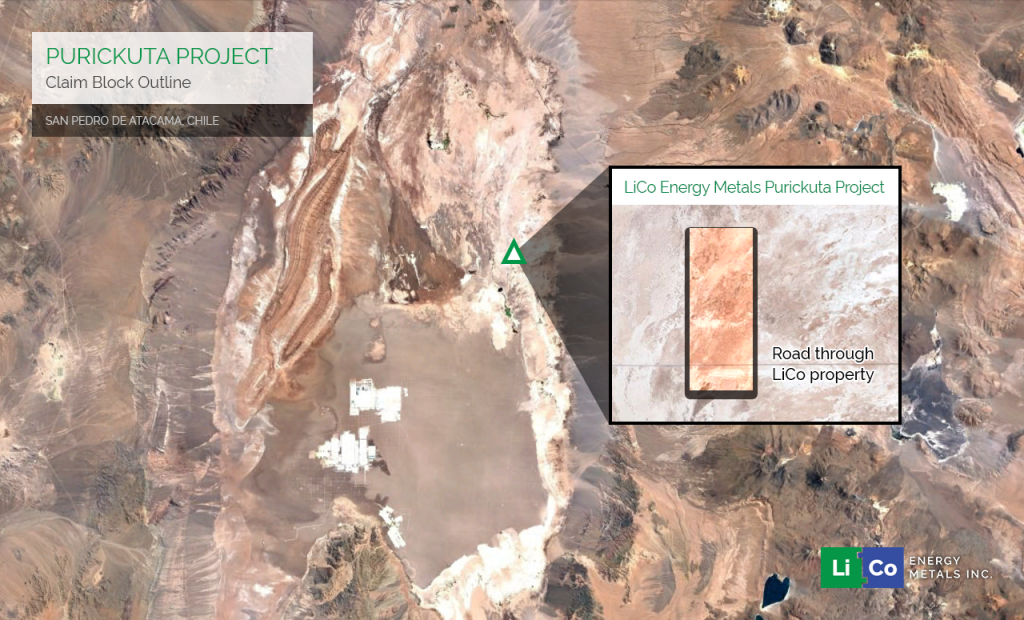 The Purickuta Project consist of 160 hectares and is one of a few “exploitation concessions” granted within the Salar de Atacama, home to approximately 37% of the worlds Lithium production. The property is contained within an existing exploitation concession owned by Sociedad Quimica y Minera (“SQM”), and lies approximately 3 km north of the exploitation concession of CORFO (the Chilean Economic Development Agency).  About 22 km south-east from the Purickuta Concession, both SQM and Albemarle Corp. have large-scale production facilities within the CORFO concession mentioned above.  These two facilities collectively produce over 62,000 tonnes of Lithium Carbonate Equivalent annually and account for 100% of Chile’s current lithium output.

Salar de Atacama is a salt flat encompassing 3,000 km2 being about 100 km long and 80 km wide. The salar possesses a very high grade of both lithium (1,840mg/l) and potassium (22,630mg/l).  It has a high rate of evaporation (3,200 mm per year) and extremely low annual rainfall (15mm average per year). These characteristics make Atacama’s finished lithium carbonate easier and cheaper to produce than its peer group globally. 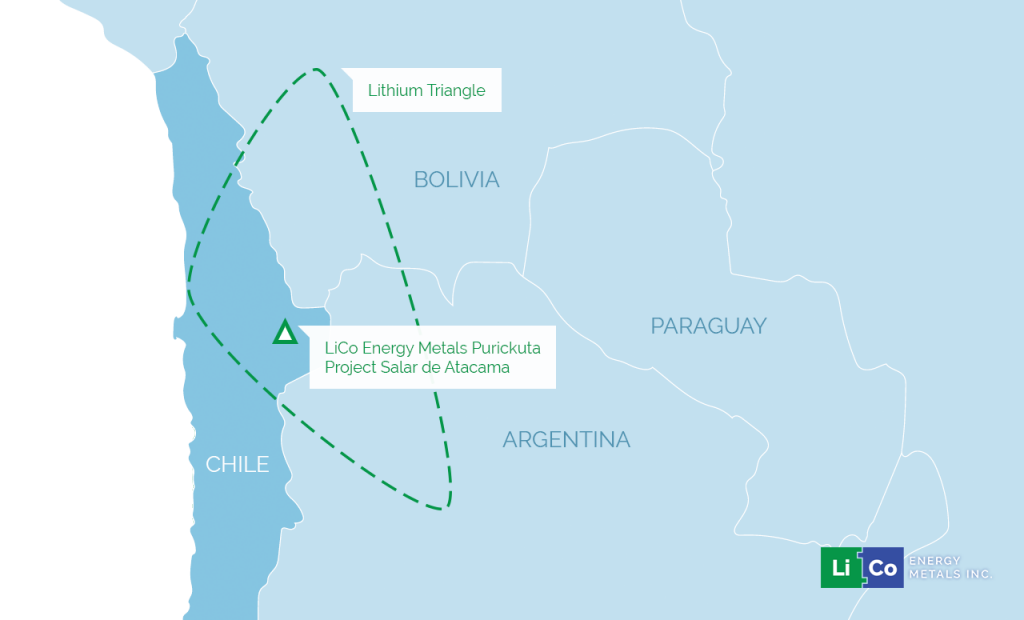 Structure of the LOI and subsequent Agreement:

The proposed transaction to acquire an interest in the Project up to 60%, shall be effected by payment of the amounts described below:

(a) payment of US$100,000 in cash by the Company to be paid to Durus Copper on the date that the Company receives a title opinion acceptable to LiCo, and in any event no later than December 31, 2016 (paid).

(b) the Company shall pay the sum of US$300,000 in cash and issue an aggregate of 5,000,000 common shares of the Company to Durus Copper within five (5) business days of date of TSX Venture Exchange approval (the “Effective Date”);

(d) the Company shall pay the sum of US$2,000,000 in cash to Durus Copper on the earliest date that is 12 months from the Effective Date or the date of the receipt of a positive preliminary economic assessment on the Property;

(e) the Company shall pay the sum of US$2,000,000 in cash to Durus Copper upon the completion of a positive feasibility report on the Property and at the latest 18 months from the Effective Date;

(f) the Company shall pay the sum of US$2,000,000 in cash to Durus Copper upon receipt of a special lithium operation contract (the “CEOL”) regarding the Property; and

(g) the Company shall have the exclusive right to accelerate all payments due under this agreement.

Once LiCo has completed the foregoing conditions and as a result has exercised the option to acquire an initial 50% interest in the Purickuta Project (including the completion of the Work Commitment described below), and during a period not to exceed 12 months from the date the CEOL is executed, LiCo has an option to commence construction of a plant to achieve production at a minimum rate of 2,000 TPA or up to a maximum rate of 4,000 TPA.  The Parties may agree to increase the production rate by mutual consent. 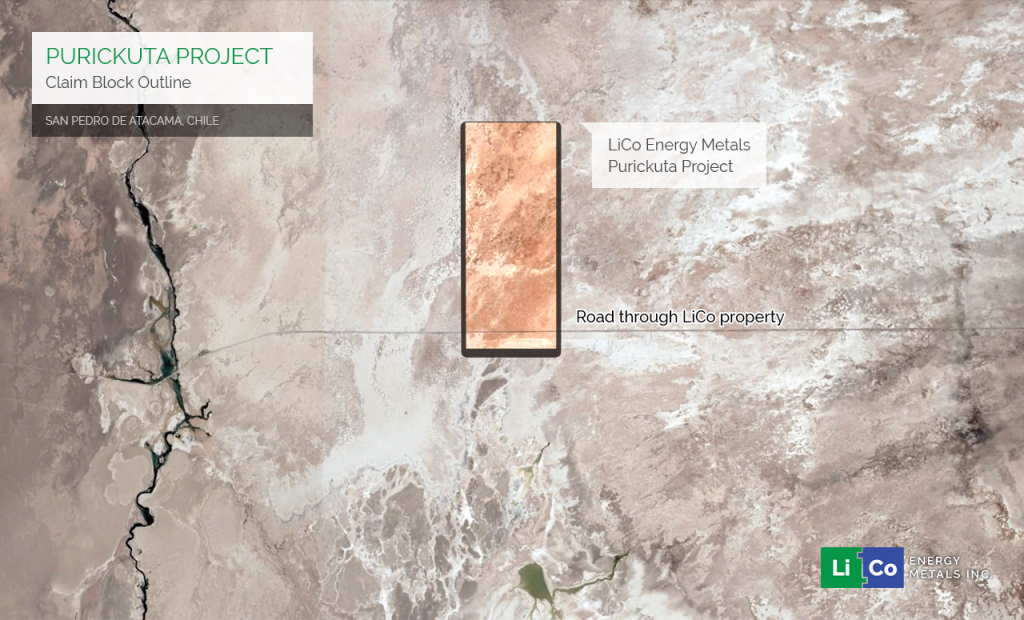 LiCo shall be required to complete the following under its “Work Commitment” obligations as follows:

(a) the receipt of an acceptable title opinion in regards to the Purickuta Project, as required for the first US$100,000 payment;

(d) the Project Feasibility Study; and

(e) the procedure and application for the execution of the CEOL.

The transaction will be subject to TSX-Venture approval.  Finders fees are payable in connection with the sourcing and negotiation of the potential acquisition of the Purickuta Project.

Qualified Person: The technical content of this news release has been reviewed and approved by Alan Morris CPG.

LiCo Energy Metals Inc. is a well funded Canadian based exploration company who’s primary listing is on the TSX Venture Exchange. The Company’s focus is directed towards exploration for high value metals integral to the manufacture of lithium ion batteries.

The Company has an option to earn 100% ownership, subject to a royalty, in the Teledyne Project located near Cobalt. Ontario.  The Property adjoins the south and west boundaries of claims that hosted the Agaunico Mine.  From 1905 through to 1961, the Agaunico Mine produced a total of 4,350,000 lbs. of cobalt and 980,000 oz. of silver. A significant portion of the cobalt that was produced at the Agaunico Mine located along structures that extended southward onto property currently under option to LiCo Energy Metals.

The Company has entered into an option agreement whereby the Company may earn an undivided 70% interest, subject to a 3% Net Smelter Return Royalty, in the Black Rock Desert Lithium Project that consists of 199 placer claims (3,980 acres, or 1,610 hectares) in southwest Black Rock Desert, Washoe County, Nevada.

The Company has signed a non-binding Letter of Intent (LOI) with Durus Copper Chile Spa, of Santiago, Chile whereby LiCo can earn up to a 60% interest in the Purickuta Lithium Exploitation Concession located within Chile’s Salar de Atacama, the world’s largest and purest active source of lithium.

The Company is planning an exploration programs for all its properties over the next several months.

On Behalf of the Board of Directors

This news release may contain forward-looking statements which include, but are not limited to, comments that involve future events and conditions such as TSX Venture Exchange approval of any Option Agreement for the acquisition of an interest in the Purickuta Project, the satisfaction of any obligations and conditions that may be contained in such Option Agreement, and the Company’s ability to exercise the Option, which are subject to various risks and uncertainties. Except for statements of historical facts, comments that address resource potential, upcoming work programs, geological interpretations, receipt and security of mineral property titles, availability of funds, and others are forward-looking. Forward-looking statements are not guarantees of future performance and actual results may vary materially from those statements. General business conditions are factors that could cause actual results to vary materially from forward-looking statements.