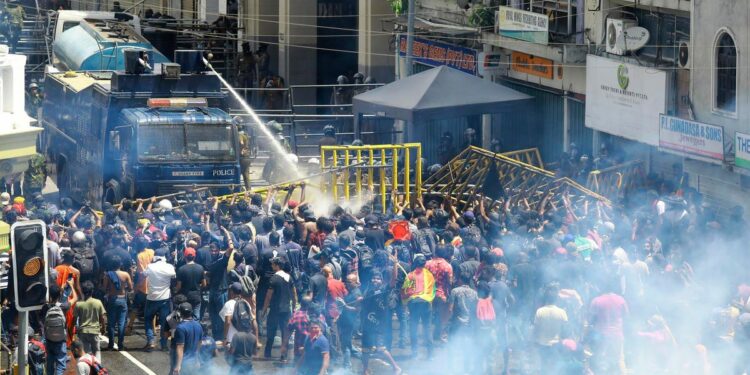 The nation of Sri Lanka has an almost perfect ESG rating of 98.1 on a scale of 100, according to WorldEconomics.com. But the government which had forced the nation to achieve that virtue-signaling target in recent years collapsed over the weekend because it led the country into self-declared bankruptcy, leaving it unable to purchase adequate supplies of fuel and feed its population. Thousands of angry Sri Lankans stormed the presidential residence on Saturday, forcing President Gotabaya Rajapaksa to step down and reportedly flee the country.

Should current trends in global energy supplies continue, Sri Lanka could end up being just a harbinger of larger things to come around the rest of the world in the months and years ahead. Somewhat ironically, an analysis of the full ESG rankings linked above shows that many of the nations with the highest scores are developing nations with the highest degrees of famine risk. Haiti, as an example, has an ESG score of 99, while the well-fed United States stands far down the list at just over 58.

“People Worry Most About the Immediate Crisis”

Frans Timmermans, Vice President of the European Commission, seems to understand the reality his own continent faces should it be left without adequate energy supplies this coming winter. Last week, Timmermans urged EU and national leaders to make efforts to beef up their fossil fuel energy supplies and delivery systems in the near term in order to try to head off disaster. “If our society descends into very, very strong conflict and strife because there is no energy, we’re certainly not going to make our [climate] goals,” he said, adding “we need to make sure people are not in the cold in the coming winter.”

Wisely, Timmermans noted further that a failure by European leadership to adequately address a looming winter energy crisis could create such a high level of social and economic disruption that it could cripple the continent’s longer-term efforts to meet climate goals. “I’ve been in politics long enough, over 30 years, to understand that people worry most about the immediate crisis and not about the long-term crisis. And if we don’t address the immediate crisis, we will certainly be off-track with the long-term crisis,” he said.

It remains an open question whether U.S. President Joe Biden and his advisors also understand the risks posed to their own political futures by rising energy costs and likelihoods of power and supply disruptions. In an extraordinary pre-trip op/ed published in Sunday’s Washington Post, Biden somehow manages to write roughly 700 words about his pending trip to Saudi Arabia without including the word “oil,” even though no one doubts that a principal motivation behind his trip is to ask Saudi Crown Prince Mohammed bin Salman to produce more crude in an effort to resupply an undersupplied global market.

The President does make one single-sentence implicit reference to Middle Eastern oil, stating “Its energy resources are vital for mitigating the impact on global supplies of Russia’s war in Ukraine.”

That is accurate, but let’s be clear on this point: The current biggest producer of oil on the planet is not Saudi Arabia, but the United States of America. This has been the case for several years now, yet we never hear anyone in this administration making any similar statements about how crucial the U.S. industry is to the maintenance of global oil supplies and the international stability plentiful oil supplies create and sustain.

The level of international stability has begun to crumble over the past year in large part due to the emergence of a chronically under-supplied international crude market. That is partly due to several factors, including impacts of the COVID pandemic, Russia’s war on Ukraine, the diminishing capacity levels within the OPEC+ cartel and the growing energy crisis in Europe that began to germinate last summer. But another key reason why that is happening is due to the fact that, despite its ranking as the #1 supplier in the world, the U.S. industry is still about 1 million barrels of oil per day short of the highs achieved during 2018 and 2019. That is in large part thanks to the continuing efforts by the Biden administration to suppress the U.S. domestic industry, and by the efforts of the ESG investor community to deny it access to capital.

“Marching to the Brink of Starvation”

This increasing level of instability resulting from rising fuel shortages, supply chain disruptions and the rapidly-escalating prices that inevitably result are now creating food shortages that have placed hundreds of millions of individuals in developing nations around the world under a very real threat of starvation. The head of the United Nations World Food Program, David Beasley, admitted as much in a report last week.

Beasley said that his agency’s new analysis shows that “a record 345 million acutely hungry people are marching to the brink of starvation.” That amounts to a 25% increase from 276 million at the start of 2022, which was double the 135 million before the advent of the COVID pandemic in early 2020.

“There’s a real danger it will climb even higher in the months ahead,” he said. “Even more worrying is that when this group is broken down, a staggering 50 million people in 45 countries are just one step away from famine.”

It should be noted that some of the food shortages are the result of governments placing a higher priority on achieving climate and ESG goals than on food production. One cause of the collapse of the Sri Lankan government was its decision to force farmers to switch from chemical fertilizers (which use natural gas as a key feedstock) to organic fertilizers in April 2021, a mandate that predictably and dramatically reduced crop yields. By the time the Sri Lankan government realized the disaster it had created and attempted to reverse course in November 2021, it was too late.

The Netherlands government, whose 90.7 ESG rating ranks it in the lower 3rd of European nations, showed a similar preference for ESG over food production last month when it announced plans for dramatic cuts in emissions of nitrogen and ammonia that could force the closing of many farming operations. The resulting protests have been huge, and reminiscent of the truckers’ protests that took place earlier this year in Canada. They have gained massive attention on social and traditional media platforms globally.

Netherlands Agricultural and Horticultural Organization’s Wytse Sonnema told Sky News Australia that the proposals have caused a broad sense of “frustration, anger, even despair” among the nation’s farmers. “And imagine if you’re a fifth-generation farmer living on your land, making a living, being part of a local community, and you see a map saying that basically there’s no future. No future for farming, but also no future for the economic, social, cultural fabric of the countryside.”

What it all amounts to is that governments in all parts of the world are making choices designed to help meet their often-arbitrary climate and ESG goals at the expense of feeding their populations and enabling citizens to keep their homes warm during the winter. Oddly, many of these political leaders seem genuinely surprised when such decisions and the damage they create cause social unrest that often ends with their being tossed out of office and even, as in Sri Lanka, run out of the country.

If this current dynamic continues, expect to soon see government officials interested in remaining in office to begin dropping the maintenance of their national ESG ratings down their list of pressing priorities.