Novus’ Chief Executive Officer, Frank Labrozzi, commented, “We are very pleased with our business execution and revenue growth to-date and we are focused for the remainder of 2017 and into 2018 to execute on strategic partnerships and acquisitions to help grow our business. We have witnessed most of the publicly-traded cannabis stocks have a positive effect earlier this year and the market has softened quite a bit across the board as of this quarter.”

Here is a poignant article on the state of publicly traded cannabis stocks:

Novus is proud to introduce its new providers into its network:

Novus continues to execute its plan as an early mover as an insurance entity in the legal medical cannabis industry with its unique business model and strategic partnerships with a focus on growing its number of patient members. Its in-house multi-prong marketing strategy utilizing direct digital marketing and strategic partners has been key to increase visibility and awareness and expand the business. Novus targets three groups of people:

During the third quarter, Novus attained a Canadian federal charter allowing it to conduct its business model across the entire country, versus having to incorporate in each province. Novus is currently rolling out its branding and sales initiatives in the provinces of Ontario, British Columbia, Quebec, Alberta, and Saskatchewan. Since the Canadian regulation is federal, inter-province is legal, as opposed to the U.S. whereby it’s intrastate only. On July 1, 2018, Canadians will be able to purchase marijuana medically and recreationally, and, as always Novus had the foresight to be first to market in the medical cannabis sector.

Subsequent to the end of the quarter, on October 23, Novus partnered with CannaLife Financial Solutions, Inc. (“CannaLife”). The partnership will expand Novus’ presence in the cannabis health and life insurance industry by leveraging CannaLife’s life components as a value-add to the Novus health distribution model. As a result of this deal, Novus will be the aggregator and CannaLife will be the administrator of writing new business under the name of Novus CannaLife.

The previously announced partnership with PotBotics, a Silicon Valley data aggregation and technology provider to the medical cannabis market, has advanced with its integration and is nearing a launch date expected over the next couple of weeks. PotBotics will introduce Novus MedPlan to the thousands of visitors and users of PotBotics seeking information on different medical cannabis options.

Novus continues to identify and engage in talks with a wide variety of potential strategic partners to increase its visibility and awareness with the ultimate goal of increasing its lives covered and revenue. The continued discussions range from widely known nationwide cannabis brands to niche local state businesses.

Revenue increased by 62% to $34,204 for the three months ended September 30, 2017, as compared to the three months ended September 30, 2016. This increase was primarily due to increased awareness and visibility of the Novus MedPlan offering and the improvement in key performance indicators (KPI) in the Company’s in-house marketing efforts, which resulted in a greater number of patient members. 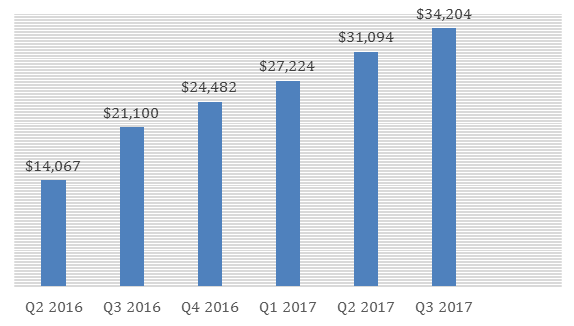 Revenue increased by 71% to $92,552 for the nine months ended September 30, 2017, as compared to the nine months ended September 30, 2016. This increase was primarily due to increased awareness and visibility of the Novus MedPlan offering and the improvement in key performance indicators (KPI) in the Company’s in-house marketing efforts, which resulted in a great number of lives covered.

The Company did not raise any capital in the three months ended September 30, 2017. All sorts of institutional convertible notes with variable toxic pricing structures approached the Company. Novus did not take, has never taken and will not consider any such capital as to protect its shareholder equity. In the third quarter of 2017, Company insiders and affiliates have not liquidated any of its holdings nor have taken any cash salary compensation for the preservation of the shareholder value. Common Shares Issued and Outstanding: direct from Company filings at OTC Markets

We invite you to review the entire filing here: https://www.otcmarkets.com/stock/NDEV/filings

Novus Acquisition & Development Corp. (NDEV), through its subsidiary WCIG Insurance, provides health insurance and related insurance solutions within the wellness and medical marijuana industries in states where legal programs exist. Novus has developed its infrastructure within many lines of the insurance business such as, health, property & casualty, life, accident and fixed annuities.

Novus medical cannabis benefits package will work as outside developers and will not cultivate, handle, transport grow, extract, dispense, put up for sale, put on the market, vend, deliver, supply, circulate, or trade cannabis or any substances that violate the United States law or the Controlled Substances Act, nor does it intend to do so in the future and will continue to follow state and federal laws. The statements made about specific products have not been evaluated by the United States Food and Drug Administration (FDA) and are not intended to diagnose, treat, cure or prevent disease. All information provided on these press releases or any information contained on or in any product label or packaging is for informational purposes only and is not intended as a substitute for advice from your physician or other healthcare professional. Once a push notification is completed the transaction is solely between the state-licensed dispensary and the registered patient.

The state laws are in conflict with the federal Controlled Substances Act. The current administration has effectively stated that it is not an efficient use of resources to direct federal law enforcement agencies to prosecute those lawfully abiding by state-designated laws, allowing the use and distribution of medical marijuana. However, there is no guarantee that the current administration, nor any future administration, will not change this policy and decide to enforce the federal laws strongly. Any such change in the federal government’s enforcement of current federal laws could cause significant financial changes to Novus Medical Group. While we do not intend to harvest, distribute or sell cannabis or cannabis related products, we may be harmed by a change in enforcement by federal or state governments.

This release includes forward-looking statements, which are based on certain assumptions and reflects management’s current expectations. These forward-looking statements are subject to a number of risks and uncertainties that could cause actual results or events to differ materially from current expectations. Some of these factors include: general global economic conditions; general industry and market conditions and growth rates; uncertainty as to whether our strategies and business plans will yield the expected benefits; increasing competition; availability and cost of capital; the ability to identify and develop and achieve commercial success; the level of expenditures necessary to maintain and improve the quality of services; changes in the economy; changes in laws and regulations, includes codes and standards, intellectual property rights, and tax matters; or other matters not anticipated; our ability to secure and maintain strategic relationships and distribution agreements. Novus Medical Group disclaims any intention or obligation to update or revise any forward-looking statements, whether as a result of new information, future events or otherwise.