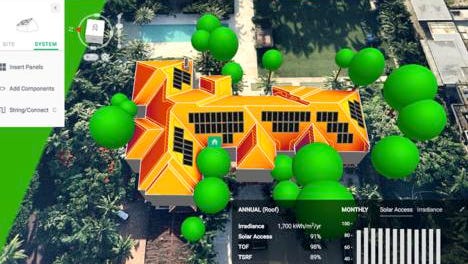 The first wave of solar innovation was focused on getting costs down. Now, the industry must look to software and automation to unlock the next phase of growth. My team at Energize Ventures is doing a lot of work on this space and we wanted to reveal more details about the emerging opportunity for digital solutions in solar energy.

The solar industry is massive – and still growing rapidly

Solar is a $100 billion industry by enterprise value in the U.S. alone. In 2021, the solar industry installed 191 GW globally, more than six times the scale from 10 years ago. In that time, lighthouse success stories have emerged in the public markets. As of 2021 year-end, there are handful of solar companies publicly listed on U.S. stock exchanges with a total combined enterprise value of $86 billion, (Source: Pitchbook). Among them are Enphase, First Solar

TSLA
is excluded from this analysis) Several large privately held firms focused exclusively on solar or with large business units devoted to the sun are achieving success as well.

Despite its exponential growth, the solar industry is still in the earliest of innings. In the U.S., less than 2 percent homeowners have installed solar on their rooftop. Solar accounts for only 3.4 percent of global energy production today. That figure is expected to increase tenfold or more by 2050. Even with further cost declines across the value chain, solar could easily become a multitrillion industry globally over the coming decades.

So, what could possibly slow it down? Despite impressive topline revenue and unit growth, many solar companies struggle with profitability. From 2019 to 2021, the top 10 public U.S. solar companies by market cap generated a median gross margin of 27 percent, EBTIDA margin of 11 percent and free cash flow (FCF) margin of -6 percent … not quite yet cash flow generating machines.

The solar industry’s best chance to continue its torrid growth, while concurrently flipping on the profit spigot, is to embrace software and automation.

In particular, there are four software-based innovations I believe will transform the solar value chain:

Customer acquisition is the single largest contributor to solar soft costs. In 2020, U.S. residential solar companies spent between $800 million and $1.5 billion on sales and marketing alone. Much of that expenditure still resides in traditional techniques such as cold calling, door knocking, radio ads, and the like. With homeowners spending $20,000 or more on residential solar arrays, there is no doubt that buying solar is a significant financial decision – and one that requires a human’s touch prior to close. However, I believe a considerable portion of the upfront customer qualification, lead generation, initial sales interaction and formal proposal generation can be done digitally, remotely, and much more efficiently.

2.    The solar financing market is ripe for disruption

Most U.S. residential solar projects employ financing of some form. As of 2021, cash purchases account for less than a fifth of all projects, while loans and third-party-owned Power Purchase Agreements (PPAs) are utilized in a majority of cases. The solar financing opportunity is lucrative, and a host of increasingly large-scale, dedicated solar financing companies have emerged, from GoodLeap and Mosaic for solar loans, to SunRun and Sunnova for PPAs.

However, a lack of innovation in solar financing over the past five years combined with low interest rates has led to excessively high financing costs being passed through to the customer. Solar loans, for example, have an average origination fee as high as 15 to 20 percent. This fee goes to cover things like customer acquisition, underwriting analysis, and kickback to the installers that bring financiers deal flow. Put into perspective, home mortgage dealer fees range from 0.5 to 1 percent, while auto loan origination fees (a similar ticket size purchase) range from 1 to 2 percent. Today, most solar financiers employ complex structuring techniques that ultimately benefit the financiers and the installers they provide kickbacks, at the expense of the customer.

Solar financing represents a ripe opportunity for software innovation. Employing a more transparent sourcing approach and data-driven underwriting that reduces loss ratios could bring these fees down to as low as three percent for the solar customer. Dramatically lowering solar financing costs would improve the accessibility to a broader demographic group, encouraging more widespread adoption. At some point, a software-enabled disruptor will see the vast amounts of revenue generated by leading solar loan providers as an opportunity that can’t be ignored.

Getting solar energy connected to the existing power grid is not easy nor cheap. Nearly half of residential solar customers cancel their solar purchase due to delays in permitting and interconnection. Large-scale solar farms in the U.S. currently wait two or three years for interconnection to the transmission network. As a result, only 25 percent of proposed solar projects that apply for interconnection ultimately make it to commercial operation.

Why? Utilities and transmission operators must evaluate and study renewable energy interconnection to ensure power grid reliability before approving any interconnections. Unfortunately, this process is anything but efficient – relying primarily on manual engineering efforts and outdated analysis tools. The slow and clunky interconnection process can have a significant impact on solar providers’ bottom line. In our own analysis of SunRun, we estimated $200 million of revenue lost due to interconnection and permitting delays. Add to that another $30 to $50 million in customer acquisition costs for projects never installed, and we’re looking at a potential net profit loss between $70 and $100 million.[1]

The good news is that readily available software tools that leverage cloud computing advances and AI-based simulation techniques can compress weeks or months of analysis time to minutes. If you’re interested in learning more about software innovators addressing interconnection, this blog post covers the topic in detail.

Utility-scale solar developers have traditionally been slow to adopt dedicated vertical solar software. Most firms have employed a mix of home-grown applications with off-the-shelf software from legacy vendors or new cloud-entrants. Oftentimes, these tools are combined with in-house customization and bespoke integrations.

Instead of investing in software and automation, fast-growing solar developers have responded to rapid growth with equally rapid hiring. Careers in engineering, supply chain, finance, legal and data science have boomed in the large-scale solar industry. More jobs in solar is a win-win, but hiring is not the solution for achieving long-term scale and sustained growth, especially with talent wars at an all-time high. The solar industry simply cannot scale to the level needed to meet U.S. clean energy goals by relying on headcount growth alone.

So what is the solution? Dedicated, holistic efforts to embed software and automation that is tailored for the utility-scale solar value chain. Some examples:

We have seen early signals that leading solar developers are dramatically expanding IT and analytics budgets, from single digit millions to tens of millions of USD annually for the largest firms. A solar software unicorn could be built by solely focusing on utility-scale plants – the recent acquisition of AlsoEnergy by Stem for $695 million is a recent indicator that we are close!

Solar’s first wave focused on bringing PV module and power electronics equipment hardware costs down through materials R&D and manufacturing scale. The second wave will be about embracing innovative, customer-friend business models to stimulate adoption by homeowners, businesses, and power companies. My prediction: solar’s next wave of winners will be defined by embracing software to generate profitable growth as the industry matures.

This post was co-written with Tyler Lancaster, Partner at Energize Ventures.

[1] These are Energize’s own estimates and are based on nonproprietary, publicly available information.