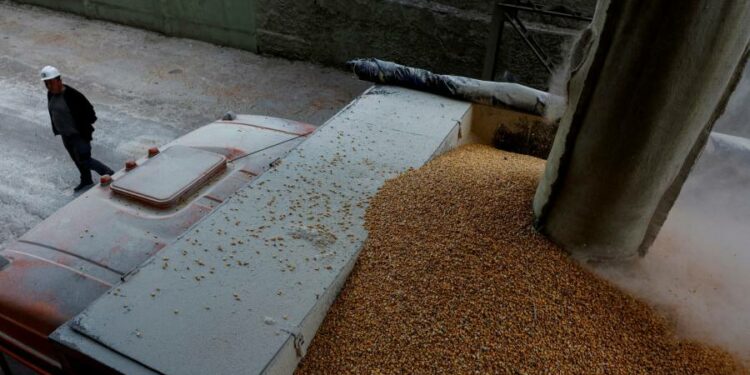 European leaders have stepped up diplomatic efforts to loosen Russia’s hold on Ukraine’s grain supplies as Kyiv’s prospects in the eastern Donbas region worsen and the risk of a global food crisis mounts.

German chancellor Olaf Scholz and French president Emmanuel Macron discussed the situation with Vladimir Putin in a phone call on Saturday. Putin told them Moscow was willing to find ways to unblock grain exports from Ukraine’s Black Sea ports and could increase its own fertiliser and agriculture exports if relevant sanctions are lifted.

Their conversation came two days after Italian prime minister Mario Draghi broached the issue with the Russian president in a bid to ease the global food crisis that threatens to inflict hardship in emerging market economies.

Ukraine and some of its western allies have accused Russia of blockading the port of Odesa, holding up the export of large shipments of grain.

Putin, Scholz and Macron discussed whether a negotiated solution could be found to open Odesa to allow grain exports to leave Ukraine, according to an Elysée briefing after the call. The French and German leaders “noted the Russian president’s promise to allow ships to access the port to export grain without it being used militarily by Russia — if the port was demined in advance”, according to the briefing.

Berlin said the call lasted 80 minutes and was “devoted to Russia’s ongoing war against Ukraine and efforts to end it”.

The risk of a global food crisis has been intensifying since Putin launched his all-out invasion of Ukraine, a major grain producer and exporter, on February 24. Russian fertiliser and agricultural exports have also been disrupted, for which Moscow blames western sanctions.

Putin told Macron and Scholz that Russia “is ready to contribute to finding options for unimpeded grain exports”, according to a summary of his words released by the Kremlin in a statement.

“Increased supplies of Russian fertilisers and agricultural products, which, of course, will require the lifting of relevant sanctions, will also help to ease tensions on the global food market,” the Kremlin reported Putin as saying.

“We talked about strengthening defence support for Ukraine, intensifying work on security guarantees, supplying fuel to Ukraine. We must work together to prevent a food crisis and unblock Ukrainian ports,” Zelensky wrote on Twitter.

Johnson highlighted “the intensive work taking place with international partners to find ways to resume the export of grain from Ukraine to avert a global food crisis” and said “the UK would work with G7 partners to push for urgent progress”, Downing Street said in a statement.

Some Western capitals fear the looming food crisis and its devastating impact on poor households in Africa and the Middle East could trigger a new wave of migration to Europe.

Russian forces have stepped up their attacks on Ukraine’s forces in the eastern Donbas region and claim to have taken full control of Lyman, a railway hub. The area has been home to the fiercest fighting in the three-month old conflict after Ukraine retreated from it. Kyiv said the battle was ongoing.

Ukraine claimed it had driven back Russian forces from Sievierodonetsk, the only major city not yet under Russian control in Luhansk, which makes up the Donbas together with neighbouring Donetsk.

Luhansk’s governor Serhiy Haidai said Ukrainian troops “managed to push back the Russians to their previous positions” after two-thirds of the city was encircled, but warned that Russian forces were “not abandoning their attempts to encircle our troops and disrupt logistics”.

Putin also discussed the military situation with Macron and Scholz, the Kremlin said. He said Russia was open to returning to the negotiating table and blamed Kyiv for stalling talks.

The Elysée said Macron and Scholz repeated that any end to the war must respect Ukraine’s sovereignty and territorial integrity. They also asked Russia to release 2,500 soldiers who defended the Azovstal steel plant in Mariupol and have since been held by Russia, arguing that they were effectively prisoners of war.

In a late-night address, Zelensky said he was confident Ukraine would retake the areas Russia was attacking with more western military aid.

“We are protecting our land in the way that our current defence resources allow. We are doing everything to increase them. And we will increase them,” Zelensky said. “If the occupiers think that Lyman or Severodonetsk will be theirs, they are wrong. Donbas will be Ukrainian.”