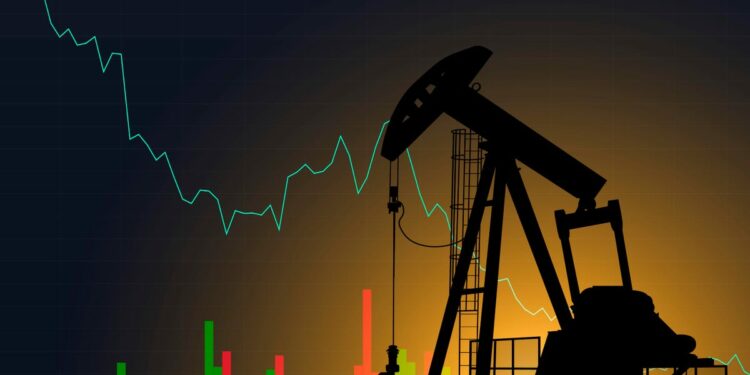 In the latest signal of a faltering oil market, energy analytics and intelligence firm Enverus said Wednesday it was lowering its outlook for crude oil prices in the face of a looming recession and signs of demand destruction. In an email, the firm said it was reducing its outlook for the international Brent price to drop below $100 by the end of 2022.

“Until July we have argued that Brent pricing was well supported at $100/bbl. However, the downside risks are becoming more prominent, and we now expect some sort of European recession by the end of the year. This will loosen balances by 1-2 MMbbl/d as weaker global demand emerges. We expect Brent to drift to the mid-$80s/low-$90s by year-end,” said Bill Farren-Price, one of the report’s authors and a director at Enverus Intelligence Research.

Farren-Price also noted recent strength in U.S. natural gas prices, and forecasts that prices to drop significantly in the months ahead. “The NYMEX summer strip traded at a wide range from ~$5.50-8.00/MMBtu in July. For summer 2022 and winter 2022-2023, our supply estimates are based on guidance that has zero elasticity. However, next summer we expect supply growth to push prices downwards to around $4.50/MMBtu. As for demand, industrial activity and power generation are showing no signs of slowing,” he said.

The following day, Enverus released its weekly summary for its daily U.S. rig count, reporting that the count of active drilling rigs dropped by 10 week-over-week, to stand at 825. This latest announcement continues a trend that has seen the Enverus count drop by 22 active rigs since reaching a recent peak of 847 on July 17. However, the firm noted that the count is up by 47% year-over-year, and that the average daily count of 829 for July was 15 more than the average for June.

The Enverus data points arrive as large oil and gas corporations are in the midst of announcing record earnings for the second quarter of the year. Last week, both ExxonMobil
XOM
and Chevron
CVX
announced big quarterly earnings and emphasized programs to return capital to investors. They have been joined this week by fellow major BP, along with big shale producers like Pioneer Natural Resource, Devon Energy and Diamondback Energy.

Those earnings announcements drew condemnation from UN secretary General Antonio Guterres, who criticized the oil companies for what he called “grotesque greed” and urged governments to implement new taxes on them. “It is immoral for oil and gas companies to be making record profits from this energy crisis on the backs of the poorest people and communities, at a massive cost to the climate,” he said. “I urge all governments to tax these excessive profits, and use the funds to support the most vulnerable people through these difficult times.”

Interestingly, Mr. Guterres has not also condemned Big Tech firms like Apple
AAPL
and Microsoft, or Big Pharma firms like Pfizer, who have also announced massive profits in recent quarters, or urged his member nations to invoke new taxes in their direction. Nor has he chosen to direct any similar criticisms at the wind and solar industries, which profit massively from billions in government subsidies and tax abatements in the U.S. and other western countries. It seems that, in the secretary general’s ideological view, only oil companies are capable of making profits at “immoral” levels, even if those levels pale in comparison to those in other industries.

Immoral or not, these projections by Enverus indicate those 2nd quarter profit levels will likely decline along with oil and natural gas prices in the calendar quarters to come.