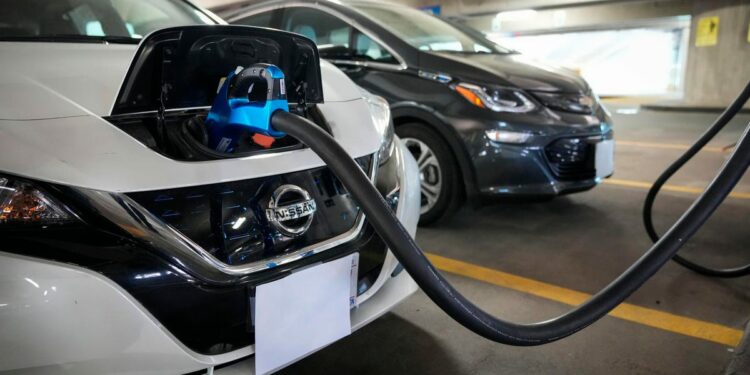 The Inflation Reduction Act will fuel the growth of electric vehicles. But it will also do the same for hydrogen fuel cell cars, although EVs are now a few laps ahead. In any case, automakers have chips in both camps.

The European Union is phasing out the internal combustion engine by 2040, while the Biden Administration wants half of all U.S.-sold vehicles to run on electricity by 2030. If electricity can replace gasoline, that would help countries meet their climate goals.

To that end, the Inflation Reduction Act provides a $7,500 tax credit for EVs beginning in 2023, and it will last a decade — a benefit that had previously gone away if the car manufacturer sold more than 200,000 vehicles. Meanwhile, buyers don’t have to wait until they file their taxes to get the refund; they get it at the time of sale. But the credit applies only to less-expensive EVs.

“The manufacturing tax credits and grant funding will help accelerate the domestic industrial base conversion currently underway. Unfortunately, the EV tax credit requirements will make most vehicles immediately ineligible for the incentive. It will also jeopardize our collective target of 40-50 percent electric vehicle sales by 2030,” says John Bozzella, chief executive of the Alliance for Automotive Innovation.

General Motors
GM
and Ford Motor
F
Co. support this initiative in the United States. In Europe, policymakers are granting $3.5 billion under the European Battery Innovation project to move away from fossil fuels, including developing rare earths. Among the companies in line to get funding are Fiat Chrysler, BMW, and Tesla
TSLA
, along with Arkema, Borealis, Enel X, Solvay, and Sunlight Systems.

Electric vehicles comprise 2% of the global car market. The U.S. Energy Information Administration says hybrids that run on electricity and gas will make up 34% of cars in developed countries and 28% in emerging economies by 2050.

The advisory firm Wood MacKenzie adds that electric batteries will hit an inflection point in 2027 — the place where the economies of scale are at that place in which price and quality are getting better at an expedited pace. The electric vehicle rollout will then be unstoppable.

The Inflation Reduction Act also includes a tax credit for clean hydrogen production — as much as $3 a kilogram. That means everything from renewable electrolysis to carbon capture to methane pyrolysis is eligible for funding — the provision that won the heart of Senator Joe Manchin from West Virginia, which will enable the bill’s ultimate passage in the U.S. Congress. Moreover, it also provides the $7,500 tax credit for hydrogen fuel cell cars.

BMW is developing electric vehicles alongside those that run on fuel cells to sidestep fossil fuels. But its hydrogen pursuit could be the most consequential ever. The goal is to mass-produce hydrogen fuel cell cars by 2030.

Hyundai and Toyota are making similar moves. Hydrogen can run everything from vehicles to factories to power plants. In the case of cars, it is safer than gasoline, lighter than air, and easily maintained. And one hydrogen station can service 400 cars a day with 10-minute fill-ups.

“Irrespective of the time of year and the outside temperatures, the hydrogen fuel cell drive combines the best of both drive worlds: the locally emission-free mobility of an electric vehicle and the unrestricted suitability for everyday use, including short refueling stops that we are all familiar with from models with combustion engines,” says Jürgen Guldner, Head of BMW Group Hydrogen Fuel Cell Technology.

Hydrogen-fueled cars have some advantages over EVs. They can run for 300 miles, and fueling up takes 10 minutes. EVs can go about 200 miles, and juicing up can take 45 minutes. EVs lose range in cold weather. But hydrogen cars do not. Most importantly, the exhaust gas from a hydrogen engine consists of pure water vapor. It is therefore emissions-free.

Pure hydrogen is stored in a tank before it is piped into a fuel cell to create clean electricity. For it to become mainstream by 2030, prices have to fall. Central to that is electrolyzers — the device that creates an electric current to split apart the hydrogen and oxygen from the water where it is found. Those costs have to fall from $840 per kilowatt to $420 per kilowatt.

Furthermore, hydrogen loses as much as 70% of the energy content when it is produced and transported. BMW says that it is half the overall efficiency of a battery-powered vehicle.

This is a Big Deal

However, if the electricity comes from abundant wind and solar, then it does not matter how inefficient hydrogen-making is. Fuel Cell maker Plug Power
PLUG
says it is on track to build out 70 metric tons of green hydrogen per day by the third quarter of this year. It says clean hydrogen prices will keep falling, and ultimately, it will be the lowest cost fuel for transportation — made possible by the dramatically falling cost of wind and solar energies.

President Biden had wanted to cut CO2 emissions by 50% by 2030 from a 2005 baseline. The Inflation Reduction Act is a significant catalyst that gets the country to the 40% threshold. The incentives for EVs and hydrogen cars are a critical part of the solution. Each technology is moving into the fast lane, although automakers plan to diversify their portfolios.