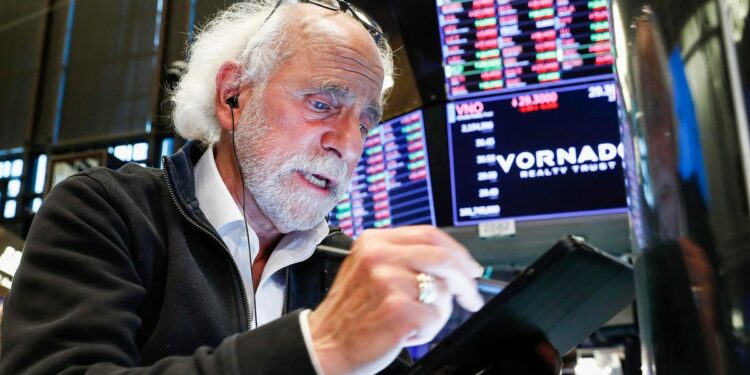 Stocks fell on Wednesday as a growing number of major Wall Street firms warned that the likelihood of a recession has risen sharply, predicting that markets could tank even further as the Federal Reserve aggressively raises interest rates to combat inflation.

The market’s rebound from a day earlier petered out as stocks declined once again: The Dow Jones Industrial Average fell 1.4%, over 400 points, while the S&P 500 lost 1.3% and the tech-heavy Nasdaq Composite 1.1%.

“Stocks are reversing their gains from Monday amid ongoing concerns about the economic growth outlook (sell-side firms and other forecasters are rushing out recession predictions on a daily basis),” describes Vital Knowledge founder Adam Crisafulli.

Citigroup became the latest Wall Street bank to increase its recession odds, forecasting a 50% chance of a downturn as consumer demand “looks to be softening.”

“The best case scenario is a ‘soft landing’ with a slight rise in the unemployment rate, but risks of a more significant downturn are rising,” Citi analysts wrote in a recent note.

Goldman Sachs on Tuesday put the odds of a recession at 30% in the next year and nearly 50% within the next two years, while also slashing GDP estimates by as much as 2% due to tighter monetary policy from the Federal Reserve.

Morgan Stanley strategists, meanwhile, raised their forecast to a 35% chance of a recession in the next year and predicted that the S&P 500 could plunge by another 20% as surging inflation remains “very stubborn.”

Energy stocks were among the hardest-hit during Wednesday’s selloff as oil prices fell: Shares of Exxon Mobil, Occidental Petroleum and Marathon Oil all declined by 3% or more. Despite the recent losses, the S&P 500 energy sector remains the best-performing area of the market this year, rising over 30%.

“In the latest example of the two steps backward, one step forward market, most of yesterday’s rally, which wasn’t enough to erase the declines of the prior two trading days, is poised to get mostly erased at the open,” says Bespoke Investment Group.

Investors will be watching Fed Chair Jerome Powell’s testimony before Congress on Wednesday and Thursday, where he will face questions from lawmakers about the central bank’s plan to combat decades-high inflation.

Experts are increasingly fearful that the Fed will plunge the economy into a recession as it continues to aggressively hike interest rates. The central bank raised rates by 75 basis points last week—the biggest increase in 28 years, while also hinting at a similarly large rate hike at the next policy meeting in July. Despite the decisive action from the Fed, markets fell to their worst weekly performance since March 2020 last week, with the S&P 500 falling nearly 6%. The benchmark index remains in bear market territory along with the tech-heavy Nasdaq, having fallen roughly 23% and 33% below their record highs, respectively.

Stock Market Could Crash Another 20% If U.S. Plunges Into Recession—These Industries Are Most At Risk (Forbes)

How To Invest During A Recession: Why Experts Pick These Stocks During Economic Turmoil (Forbes)