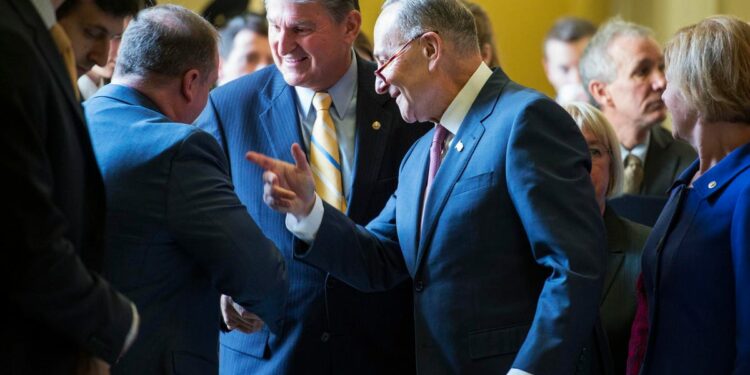 On Thursday, Arizona Sen. Kyrsten Sinema signaled her support for the reconciliation bill now pending in Congress. By consenting, Sinema likely paved the way for a legislative package that one media outlet dubbed “the biggest and most consequential climate change bill ever passed by Congress.”

The bill — dubiously dubbed the Inflation Reduction Act of 2022 — includes $370 billion in energy-related spending. That’s only an estimate. The 700-page bill is so complex that few legislators (and even fewer reporters) understand how much it will actually cost. Manchin-Schumer leaves no special interest unrewarded. The bill gives lollipops to electric vehicles and perennial-not-ready-for-prime-time technologies like carbon capture and hydrogen. The legislation is so broad and has so many carve outs that it has been lauded by Exxon Mobil and the Natural Resources Defense Council.

But the biggest favors in the bill are going to – who else? — Big Wind and Big Solar. Indeed, the language in the bill assures that the corporate welfare for wind and solar won’t expire for decades. More on that in a moment. First, the numbers.

As can be seen in the above graphic which is derived from Treasury Department data, the tax credits for solar and wind are the most expensive energy-related provisions in the tax code. Between 2021 and 2031, the tax credits will cost the federal treasury $113 billion. The investment tax credit (ITC), used by the solar industry, will cost federal taxpayers about $60 billion. The production tax credit (PTC), which expired at the beginning of this year and is used by the wind industry, will cost about $53 billion. For comparison, the oil and gas sector will get about $29 billion in tax credits and the nuclear sector will get a paltry $3.4 billion.

Those numbers don’t tell the whole story. An “apples-to-apples” comparison shows that last year, the solar sector got 267 times more in federal tax credits per unit of energy produced than the nuclear industry. The wind energy sector got 99 times more than nuclear.

The tax credits for wind and solar have become a favored tax-avoidance scheme for some of America’s biggest corporations. NextEra Energy
NEE
(market capitalization: $180 billion), the world’s biggest producer of renewable energy, has feasted on the PTC. In its latest 10-K filing, the company reported nearly $4.3 billion in federal tax credit carryforwards, which assure it won’t be paying federal income taxes for many years to come. Berkshire Hathaway
BRK.B

BRK.B
Energy a subsidiary of corporate giant Berkshire Hathaway (market capitalization: $650 billion) and a major developer of wind and solar projects in Iowa and other states, has collected about $2.7 billion in tax credits over the past three years. A note to the company’s financial statement says that the $2.7 billion “includes significant production tax credits from wind-powered electricity generation.”

The best analysis of the wind and solar tax credits in Manchin-Schumer has been done by Lisa Linowes, the founder and executive director of the WindAction Group which has been educating the public and documenting the backlash against large-scale renewable projects since 2006. (Linowes was on the Power Hungry Podcast in April.)

In a post on the WindAction website, titled, “Schumer-Manchin: A terror unleashed,” Linowes explains that the language in the bill not only includes extensions of the ITC and PTC (a “temporary” program that has been extended 13 times) it also says that the tax credits for wind and solar will remain in force until the electric sector’s emissions are slashed by 75%. (If you are scoring at home, you can find the relevant sections on pages 449 and 450 of the bill.) Here’s how she explains it:

Linowes makes a point that has been ignored by every media outlet in the country: lobbyists (and/or their helpers on Capitol Hill) inserted provisions in Manchin-Schumer which assure that Big Wind and Big Solar won’t have to stop feeding at the federal trough for decades to come. Cutting electric-sector emissions by 75% will require the sector to reduce its emissions from about 1.7 billion tons per year to about 425 million tons per year. Slashing emissions by roughly 1.3 billion tons per year would require eliminating nearly all coal- and gas-fired generation in America. According to the EPA, in 2020, those two fuels accounted for about 1.5 billion tons of emissions from the electric sector.

There is simply no way that will happen over the next two decades or so. Our electric grid needs gas- and coal-fired power plants to assure reliable and affordable electricity. Without those plants, the grid would fail and the economic and human losses would be staggering. Nuclear power could — and should — replace those gas and coal plants over the coming years, but America is closing its nuclear plants far faster than it is building them. Here’s Linowes again:

Then, referring to the raging backlash in rural America against the encroachment of wind and solar projects, Linowes wrote:

There are other problems with the Manchin-Schumer bill and how it’s being sold. To cite just one example, a press release issued by the Democrats claims it will “reduce carbon emissions by roughly 40 percent by 2030.” That claim was parroted by New York Times
NYT
reporters Brad Plumer and Lisa Friedman, without any context or skepticism. They wrote the deal will “put the United States on track to slash its greenhouse gas emissions to roughly 40 percent below 2005 levels by 2030.”

As I pointed out earlier this week, that’s an absurd claim on its face. Achieving that 40% cut will require slashing 1.2 billion tons of emissions from the U.S. economy. For perspective, that’s nearly equal to all of the energy-related emissions from U.S. industry in 2021. Put another way, cutting that much emissions — and doing so in just 7.5 years! — would require cutting domestic oil use by more than half. (Last year, oil-related emissions totaled 2.2 billion tons.)

The sad truth is that the Manchin-Schumer bill contains some of the most far-reaching energy and environmental measures of the modern era and yet the biggest provisions in the bill, including the cost of the tax credits, and how more wind and solar will affect the integrity and cost of operating the electric grid, have barely been debated in Congress. In short, Manchin-Schumer shows, yet again, how perverted the parliamentary process in Congress has become.

To conclude, I’ll cite a recent claim from John Kerry, the Biden administration’s climate envoy, who said “Solar and wind are less expensive than coal or oil or gas. They just are less expensive.” If that were true, the solar and wind sectors wouldn’t need federal subsidies. But the Washington Favor Factory never sleeps. If the Manchin-Schumer bill becomes law, Big Wind and Big Solar will be able to count on tens of billions of dollars in federal tax credits for decades to come.