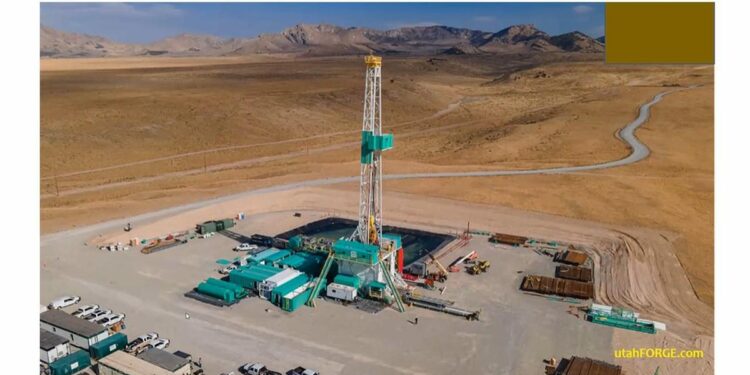 The US Department of Energy (DOE) has funded a project called FORGE where hot granite rock will be drilled and fracked using the best oil and gas technology. An overall goal is to see if water pumped down one well can be circulated through the granite and heated before pumped up a second well to drive turbines that generate electricity.

John McLennan, Department of Chemical Engineering, University of Utah, is the co-principal investigator for this DOE project. A webinar presentation on this topic was sponsored by NSI on April 6, 2022: Frontier Observatory for Research in Geothermal Energy (FORGE): An Update and Lookahead

Following are questions posed to John McLennan, and his answers.

Q1. Can you provide a brief history of geothermal energy?

From early work at Larderello in Italy, in the early 1900s, geothermal energy (for electric generation and direct use) has expanded to an installed electric generation capacity of 15.6 GWe (GigaWatts of electricity) in 2021. The utilization is global – more than 25 countries worldwide. However, allocation is still a small portion of the world’s energy portfolio. Looking at this global distribution, conventionally, geothermal energy is constrained to near-surface expression of elevated temperature as would occur near plate boundaries, volcanoes, etc.

The United States has the largest installed geothermal electric generation capacity, followed by Indonesia, Philippines, Turkey, New Zealand, Mexico, Italy, Kenya, Iceland, Japan. Of these operations in the United States, wells producing geothermal energy might average 4 to 6 MWe. As a rule-of-thumb, at 392°F (200°C) and flowing at 9 bpm (378 gpm), on the order of 1 MWe can be generating, maybe servicing 759 to 1000 homes in the United States.

Q2. What are enhanced geothermal systems, and where is fracking applied?

About fifty years ago, the concept of Enhanced Geothermal Systems (EGS) was envisioned by scientists and engineers at the Los Alamos Scientific Laboratories (now LANL). Back then, the concept was known as hot dry rock (HDR). One methodology is to drill an injection well and a production well and create the fractures interconnecting them. These fractures serve as heat exchangers – much like the radiator in an automobile.

Water is used as a working fluid in this closed system (water is not lost). Cold fluid is injected down one well. It passes through the fractures and in doing so acquires heat from the hot rock. This hot fluid is produced to the surface through the second well in the doublet. At the surface, the heated fluid can be flashed to steam or run through an organic Rankine cycle plant to drive a turbine and subsequently a generator. The water, with heat taken out, is recirculated.

While it is a sound idea, success has been stymied for the fifty years since its conception. While there have been multiple projects around the world, with scientific success, commerciality has not been achieved and electric generation at these pilots has not exceeded ~1 MWe.

In the US however, the resource is significant. In the western United States, estimates are 519 GWe at drilling depths of less than 15,000 to 20,000 feet. Modern drilling technology, adapted from the petroleum industry makes this drilling feasible. Couple that with developments that allow drilling horizontal wells and creating a multiplicity of hydraulic fractures along these wells (imagine each fracture provides significant surface area for heat exchange) and Enhanced Geothermal Systems are feasible.

Creating the fracture system by hydraulic fracturing is a key element. This is not new. It was first tried for EGS at the Fenton Hill site in the Jemez Caldera in New Mexico, during early developments by the Los Alamos National Laboratories. Of note, is one large hydraulic fracture pumped in December 1983 to attempt to interconnect two wells (before modern directional drilling was readily applied). In that hydraulic stimulation, 5.7 million gallons of water with added friction reducer were pumped at up to 50 bpm (2100 gallons per minute) at downhole pressures up to about 12,000 psi. Fine particles of CaCO3 were added for fluid loss control (to simplify the fracture system).

The lessons learned from Fenton Hill, other sites around the world, and technologies from other extraction industries (inclined and horizontal drilling, multistage fracturing) encouraged the United States Department of Energy (DOE) to initiate a renewed research program known as FORGE (Frontier Observatory for Research in Geothermal Energy) to build a field laboratory to test new technologies that would allow commercialization of EGS.

Q3. Tell us about the site of the FORGE project in Utah and why it was selected.

The DOE sponsored a competition among five prominent EGS locations in the United States. This was subsequently “down-selected” to sites in Fallon, Nevada, and Milford, Utah. In 2019, the Milford site was ultimately selected as the location of the FORGE field laboratory (see image at top of post).

The criteria for selection included 1) reservoir temperatures between 175 and 225°C (hot enough to prove concepts but not so hot that technology development is impeded), 2) at depths greater than 1.5 km (deep enough that drilling technology development is feasible), 3) low permeability rock (granite at the FORGE site), 4) low risk of inducing seismicity during operations, 5) low environmental risks, and 6) no connection to a conventional geothermal system.

Part 2 will continue the topic by addressing the following questions and answers:

Q4. What is the basic design of the injection and production wells?

Q5. Could you summarize the three frac treatments in the injection well and their results?

Q6. What is the potential for commercial application?