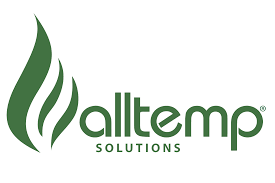 alltemp® refrigerant was installed in a 22-ton Liebert Computer Room Air Conditioner (“CRAC”) unit that runs 24 hours per day. Both compressors, which originally were charged with R-22 refrigerant, were converted to alltemp® in the heat of mid-summer, and have been monitored for over one year consistently showing energy savings of 22%+. Additionally, the identical adjacent Liebert CRAC with R-22 has also been monitored during this period and has been called upon 18% less as a direct impact of alltemp’s increased capacity in CRAC number 1. The CRAC has been consistently performing with these results after two Southeast region summers. This further demonstrates the strengths of alltemp® refrigerant and validates alltemp’s® value proposition as a drop-in refrigerant replacement for R-22. Measurement and verification services were conducted by Mark Stetz of Stetz Consulting.

The report stated, “Although the adjacent CRAC unit was not converted to alltemp®, changes in power consumption and system loading were observed that appear to be related to changes in the first CRAC unit. There is communication between the two units; if one unit were not functioning at capacity, that cooling load would be seen by the other unit.”

“We strongly believe in the strategic importance of providing our customers with an environmentally friendly product that can help generate increased operational efficiencies and reduce costs. While we developed this technology to serve the needs of multiple industries, to reduce CRAC costs by twenty, or even thirty, percent is a significant technological advance that results in immediate overhead cost reductions for all data and telecom centers,” said William Lopshire, Alltemp CEO.

Mark Stetz is an energy efficiency, renewable energy, and carbon management consultant who authored white papers for Onset on monitoring HVAC Performance and M&V for the Department of Energy. As a senior project manager for Nextant, he developed their M&V protocols.

Alltemp, Inc. has developed a proprietary refrigerant technology, after years of research and development called alltemp®, a proven replacement for many worldwide refrigerants that have detrimentally affected the global environment. alltemp®’s refrigerants are environmentally friendly, sustainable, and cost-efficient energy solutions for the residential and commercial marketplace. alltemp® refrigerants have broad applications, ranging from Heating Ventilation and Air Conditioning (“HVAC”), to refrigeration and foam insulation, to industrial solvents. alltemp® is the ideal solution for replacement of R-407c, R-134a, R-404a, and HCFC-22, better known as R-22, but which is rapidly being phased out in all developed countries due to environmental concerns over its strong effect on the depletion of the Earth’s ozone layer. For further information, please go to www.alltempsolutions.com.

This press release contains “forward-looking statements” within the meaning of The Private Securities Litigation Reform Act of 1995 (the “Act”), as well as Section 27A of the Securities Act of 1933 and Section 21E of the Securities Exchange Act of 1934. In particular, when used in the proceeding discussion, the words “plan,” “confident that,” “believe,” “expect,” or “intend to,” and similar conditional expressions are intended to identify forward-looking statements within the meaning of the Act and are subject to the safe harbor created by the Act. Such statements about the Company’s future expectations, including future revenues and earnings, and all other forward-looking statements are subject to certain risks and uncertainties that are subject to change at any time, and the Company’s actual results could differ materially from those expressed in any of the forward-looking statements. Such risks and uncertainties include, but are not limited to, market conditions, the availability of components for and delays in the start of production, general acceptance of the Company’s products and technologies, competitive factors, the ability to successfully complete additional financing, and other risks.