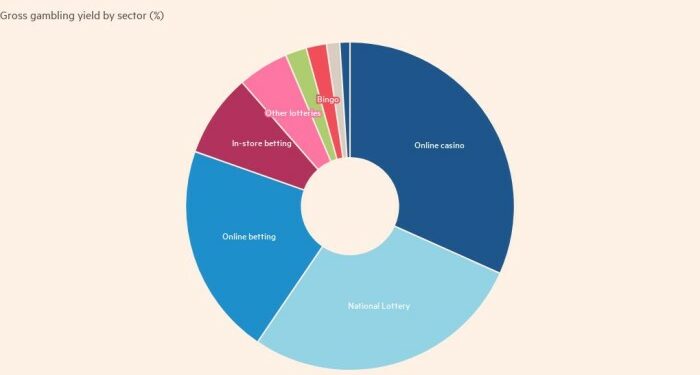 Dave, a Scotsman in his early twenties, received a marketing email for an internet casino in 2009, offering him £200 more to bet with if he played £200 on the online slot machines.

Over the next decade, Dave would lose £100,000 to his gambling addiction. Despite multiple attempts to close his accounts and opt out of marketing, he continued to be sent deals, which he blamed for triggering addictive behaviour and thoughts of suicide.

Dave had been targeted by a constellation of companies, including gambling operators and third-party data brokers, who had been quietly tracking, profiling and targeting him as a highly valuable asset.

This week, the UK data watchdog said its investigations team is examining a complaint that outlines the scale and scope of tracking and ad targeting in the online gambling industry for the first time. The move comes as government plans to reform gambling laws were put on hold for the fourth time last month.

“Gambling has the ultimate hook,” said Dave, who declined to use his real name. “You always think you can fix your gambling problems by gambling some more.”

The gambling industry spends £1.5 billion a year on advertising in the UK, and 60 per cent of its profits come from 5 per cent of users, who are mostly vulnerable or problem gamblers, according to a parliamentary report. To target customers, companies gather vast troves of data from when they log on, from speed of play to how much money they spend in a session.

The pressure group has called urgently for an audit of the entire online gambling industry, which it believes employs similar techniques, as well as the adtech companies and data brokers whose services it uses.

Flutter said: “Protecting our customers and their personal data is of paramount importance to Sky Betting & Gaming and other brands in the Flutter Entertainment group. We also expect the same levels of care and vigilance from our partners and suppliers.

“All Flutter Entertainment companies manage customer data in a controlled way to ensure that we deliver our products in a safe and reliable fashion, to do all we can to proactively protect our customers from harm, and to ensure that our business meets its legal and regulatory obligations.”

Much of the tracking done by gambling companies is ostensibly to monitor for dangerous play, amid concerns that gambling addiction has become increasingly prevalent, particularly during the long stints of the coronavirus lockdown.

Lee Fenton, chief executive of Bally’s, which owns Virgin Games, said: “We use data all across our business. Data is our biggest and most powerful tool.”

The complaint being examined by the ICO is based on a February report, written by Austrian researcher Wolfie Christl and commissioned by Clean Up Gambling, who alleged that Sky Bet and its partners were creating detailed behavioural profiles of subjects and sharing thousands of data points with dozens of third parties, to persuade gamblers that they wanted to win back.

Flutter said it did not have access to punters’ wider financial data when it created profiles, and that Sky Bet uses third parties to help target sponsored social media ads away from vulnerable customers, rather than towards them.

One advertising partner, Signal, owned by credit reporting giant TransUnion, had a dossier of 186 attributes for an individual, including their propensity to gamble, their favourite games and their susceptibility to specific types of marketing.

TransUnion said it assists gambling companies in “preventing fraud, confirming age and identity, checking affordability and protecting vulnerable customers, to support responsible gambling”. The company added it is unable to discuss individual clients and that it complies with the law.

Signal’s profile included metrics like how much the individual was worth financially to the gambling companies and if they returned after lapsing. Signal ceased operating in the UK following legal action taken after the publication of Christl’s report.

“This is the sharp end of data abuse. We are talking about addiction, people losing vast sums of money, and profiling being harnessed to exacerbate that,” said Matt Zarb-Cousin, the director of Clean Up Gambling who is a former addict himself.

“It’s not like selling garden tools on the internet. We are talking about something very, very addictive.”

The complaint to the ICO alleges widespread illegality in how Skybet operates, including failure to obtain consent to collect sensitive medical data related to addiction. “None of our clients knew they were being profiled, let alone there were third parties involved,” said Ravi Naik, legal director at AWO, who represents Clean Up Gambling.

Flutter said it was a technology-driven business that used customer data in a number of sophisticated ways but that all data were processed lawfully and transparently.

In March, the gambling regulator hit Flutter with a £1.17mn fine for sending promotional emails to customers of its Sky Betting and Gaming brand that had self-excluded from gambling or opted out of marketing communications.

Among those who had received such emails was Dave. “I’ve relapsed a few times from being sent direct marketing,” he said.

“They have a business model that is basically, recruit customers, ruin them, and move on to the next one. All they care about is profit.”