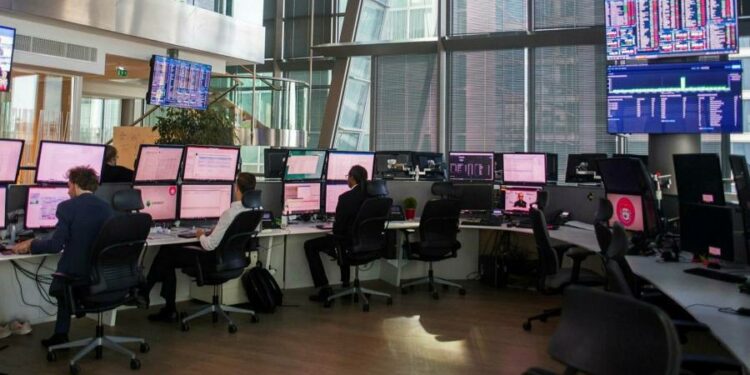 Global stocks were on course for their first weekly gain this month, as traders questioned whether an economic slowdown would temper central banks’ determination for aggressive interest rate rises.

By Friday morning in New York, a FTSE index of developed and emerging market shares had registered a gain of 3.4 per cent from the previous Friday, following three straight weeks of declines.

Wall Street’s S&P 500 added 1.2 per cent, led by tech stocks whose higher valuations have made them particularly exposed to rising interest rates. The tech-focused Nasdaq Composite rose 1.5 per cent.

The FTSE All-World index has dropped almost 20 per cent so far this year, with this week’s change of mood inspired by hopes that a short recession could calm red-hot inflation and inspire global rate-setters to slow the pace of rate rises.

“There’s been a really powerful shift from a very aggressive rates and inflation narrative to the idea of an economic slowdown,” said Anita Tanna, head of European equity sales at Barclays.

And after 10 weeks of falls for global shares this quarter, traders were now “clinging to this idea” of worsening economic conditions “reducing the pressure on central banks to raise interest rates”, said Guillaume Paillat, portfolio manager at Aviva Investors.

Purchasing managers’ indices produced by S&P Global — viewed by investors as real-time gauges of business activity — indicated on Thursday that the US economy slowed sharply in June, while eurozone economic growth slumped to its weakest level in 16 months.

The annual pace of consumer price inflation hit a 40-year high of 8.6 per cent in the US last month and is running at record levels in the eurozone. The US Federal Reserve implemented an extra-large 0.75 percentage point rate rise this month and the European Central Bank is poised for its first increase in more than a decade in July.

But the US PMI, which collates executives’ responses to questions on topics from order volumes to commodity prices, also showed input costs were rising at their slowest pace in five months, sparking hopes inflation has peaked.

Money markets on Friday anticipated a US federal funds rate of just over 3.4 per cent in December, having forecast a rate of 3.6 per cent earlier in the week.

A decline in oil prices, which were driven higher this year by western sanctions against Russia for its invasion of Ukraine, has also lightened the market mood. Brent crude, the global benchmark, traded at $111.16 a barrel on Friday, down from about $122 two weeks ago.

The S&P energy sector has lost more than a fifth of its value in a fortnight.

The yield on the benchmark 10-year US Treasury note, which moves inversely to its price and sets the tone for debt costs and asset valuations worldwide, has declined from about 3.28 per cent at the start of this week to 3.09 per cent — rising 0.03 percentage points on Friday.

Ostensibly small moves in the 10-year yield, which investors use as a discount rate for valuing companies’ future profits, can have outsized effects on equity valuations, particularly for tech stocks whose peak earnings are often projected further out into the future.

Still, some analysts cautioned that the improved market sentiment may not last. “The mood this week is a little too optimistic and forward looking,” said Greg Peters, co-chief investment officer at PGIM Fixed Income. “I’m unconvinced that central banks will stop tightening if economies slow.”