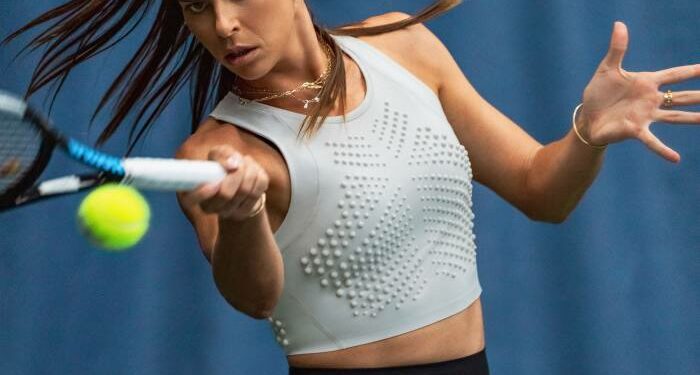 When I went for a run recently I was a little heavier than usual. It wasn’t that I’d been overdoing the pies but rather the weighted exercise gear I was sporting. My T-shirt and the underlayer of my shorts were coated in hundreds of black baubles that climbed across the back and torso and stretched down the quads and thighs. From new Portland startup Omorpho, this “Gravity Sportswear” has a futuristic look recalling the late Chadwick Boseman’s knobbly superhero suit in Black Panther. And it purports to give you supercharged workouts

Made of a high-density polymer that feels like rubber, the baubles add about 700g to the T-shirt and slightly less to the shorts. There are also men’s and women’s tank tops, tights and, for those who’ve been diligently eating their spinach, vests weighing nearly 5kg thanks to stainless-steel ball bearings.

Co-founded by former Nike exec Stefan Olander, Omorpho created its “micro-loading” designs to force your body to work harder without disrupting your natural way of moving. It’s a clever extension of the idea of weighted workout vests, which have long been used by pro athletes. The brand – which recommends its garb for everything from dancing to tennis to HIIT routines – claims it makes users work six per cent harder and burn eight per cent more calories during workouts than regular exercise apparel.

I believe it. It may not sound like much added heft but I certainly felt it on my run, where I found myself gasping for air at a point where I’m usually cruising. When I stopped to do ab crunches, every movement was that bit harder, as if the air were thicker. I tired more quickly. My muscles also ached more than usual the next day.

While the aesthetics may prove too bold for some (one friend compared it to the nerdy motion-capture suits worn by actors), I don’t hate the look of the tops. And I find the idea of squeezing more out of each workout greatly appealing. If I’m going to commit to a run, or a dreaded HIIT session, I might as well make each step, dip or crunch count for more. Omorpho G-top short sleeve, $159; G short 2-in-1, $179; omorpho.fit

The SIQ brings our obsession with tracking – steps, sleep, calories – on to the hoops court. Fitted with internal motion sensors, and synching with an app, this Bluetooth-compatible basketball feels exactly like a regular game-quality ball but it records every shot that you hit, miss and “swish”. The startup, which was founded by 6ft 7in Harri Hohteri, a Finnish former pro player, is billing itself as the ultimate training tool. And big guns seem to agree: it’s the first smart basketball to be approved by the International Basketball Federation, Miami Heat shooter Duncan Robinson is a fan, and WNBA star Kayla McBride has said it helped her overcome a recent slump. SIQ Basketball, $99 plus $6.99 monthly subscription, siqbasketball.com

Linked on the links

Caddies beware: the MV2 might have one-upped you as the ultimate golfer’s companion. Rendered in black or white microsuede (a waterproof synthetic), this new golf bag may look understated but it comes with all the tech-y trimmings. It has a solar panel that’s connected to a phone charger, an insulated thermal pocket to keep drinks chilly, and surprisingly punchy Bluetooth speakers for those who like to putt to a beat. The speakers last an impressive eight hours. It’s the work of MNML, a golf-kit startup from sunny Redondo Beach, Los Angeles, which has also taken care of the basics: it fits 14 clubs and has four dividers, a built-in stand, and pockets with snappy magnetic closures. MNML MV2 golf bag, $259, minimalgolf.com

Resembling an oversized watch face mounted on your handlebars, this smart compass shows cyclists the way, turn by turn. You connect the Velo 2 to your smartphone via Bluetooth, set up your route on the Beeline app, and thereafter can pocket your phone. After you enter your destination – and, if you’d like, points along the way – it will spit out three routes: quick, quiet, or a happy medium. The screen shows distance, speed, ETA and turn-by-turn navigation. And it will only improve: its rating buttons enable riders to indicate whether they’re enjoying a particular stretch, and it will update its data to suggest favourable paths. It’s fully waterproof and has an 11-hour battery life. Beeline Velo 2 cycling computer, £79.99, global.beeline.co

It’s not my finest moment, for my twig-like arms are shaking violently as I try to complete some modest bicep curls. Just when I’m about to give up, however, the weights lighten and I’m able to finish. Such is the magic of the Trainer+, which enables resistance workouts from home using a space-saving platform recalling a heavy doormat. For shoulder presses, squats, and 100+ other movements, you tug on handles attached to cables; motors apply anything from 0-200kg and AI software adapts the weight in real time. It’s controlled via an easy-to-follow app, and you can do your own routine or follow a class. Best of all, once you’re done, simply wheel it under the bed. Vitruvian Trainer+, from £2,190, vitruvianform.com