Home » Technology » My iPhone needs a jubilee pudding too 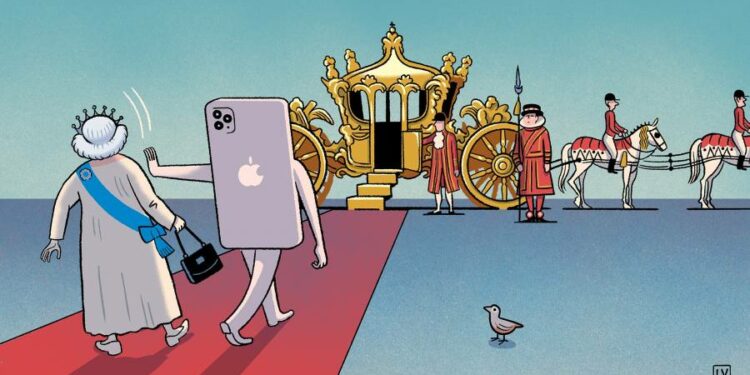 My iPhone needs a jubilee pudding too

This week’s newspapers are full of the plans to celebrate the Queen’s platinum jubilee. The festivities to mark an astonishing and unlikely-to-be-repeated 70 years on the throne next month include parties, parades, tree plantings and a competition to invent a new “platinum pudding”.

The pudding plan is to be taken seriously if precedent is anything to go by. The sandwich stores and salad bars of Britain are still tormenting us with coronation chicken, a recipe originally created as a dish for George V’s silver jubilee, and later updated and rebranded “coronation chicken” for the Queen’s accession in 1953. The new dessert could be littering our sweet menus for decades.

Yet while these plans are right and proper it was striking to see the details unveiled on the same day as several news organisations marked the 15th anniversary of the unveiling of the first iPhone. Admittedly this is a mere crystal jubilee, which is all the more remarkable as it already feels like we have spent well over 20 years staring at our smartphones. Yet while the monarch is getting a ceremonial pudding and plenty more besides, there are still no official plans to mark this far more epoch-defining anniversary. This is a staggering oversight, given that the Queen is still not even available in a touchscreen version.

The iPhone is after all the device which, while not the very first of the breed, kicked-off the smartphone revolution. This was the moment that led to the whole world getting neckache and ushered generations into surgical attachment to their phones. And we aren’t even being asked to dream up a special pudding to mark the event. (Apparently there was talk of a ceremonial pudding but a lot of the good apple recipes are already taken and the fruit growers’ association is being very uncooperative about ceding copyright of desserts. This is a tragedy. Can you imagine the hype for the winner? “With the thinnest ever pastry crust, the juiciest fruit, the most exact precision slicing and the most perfectly unrefined caster sugar, we have reinvented the dessert and we are calling it . . . Apple iTart.”)

The lack of a programme of festivities may of course be down to Apple’s famous secrecy. Perhaps even now there are staff working on plans for a programme that will reinvent anniversaries. A full catalogue of celebration may be downloaded on to our phones without our consent in a future update, a bit like the time that a U2 album was automatically installed on iTunes users’ devices. There are also rumours of a new model some time this year. This is less surprising as there is always a new model some time this year. But perhaps we will see a special $15,000 iPhone designed by Damien Hirst in collaboration with Swarovski, featuring a holographic image of Steve Jobs on the back. Oh, and a slightly better camera.

A broader problem is Apple may not want to do anything that might actually distract people from their phones. Indeed a recent challenge is that it has to tread a line between ubiquity and seeming to care about screen addiction — an issue it is currently tackling, without irony, with a feature that allows it to take control of when you can use the device.

The anniversary also coincides with a new book that highlights the ways the internet and social media are destroying our attention spans. Unfortunately I’ve forgotten the title, and it was too long so I didn’t read it.

While Apple clearly has some way to go to match the House of Windsor for jubilee planning, the royals could also learn a lot about product refreshes. Admittedly the abdication upgrade was fairly successful but in general Apple has shown itself far more effective at phasing out obsolete models. It is hard to imagine the folks in Cupertino waiting this long to deliver a new and improved Duke of York.

The old model has long since outlived any modern usage and is thought by many to be actually damaging the overall product offering. If they leave it much longer the valuable York marque could go the same way as the Duke of Clarence, a brand tainted over centuries. An early Duke of Clarence was executed as a traitor, while the most recent is now only remembered as a possible Jack the Ripper. Those last allegations are almost certainly false, not least because the Duke of Clarence was in fact taking his nephews to a PizzaExpress at the time of the killings.

The once popular Sussex brand has moved away from the core suite of products and must either be retired or refreshed. On the other hand it has been good to see the Duke and Duchess of Cambridge keeping the tradition of regular product launches even if they are still falling short of Apple’s frequency.

As both sides could learn something from each other, perhaps the ideal solution would be a tie-up between these two great brands: the platinum iPhone complete with national anthem ringtone, the device that has reinvented jubilees.

Why businesses are getting more political

Why businesses are getting more political