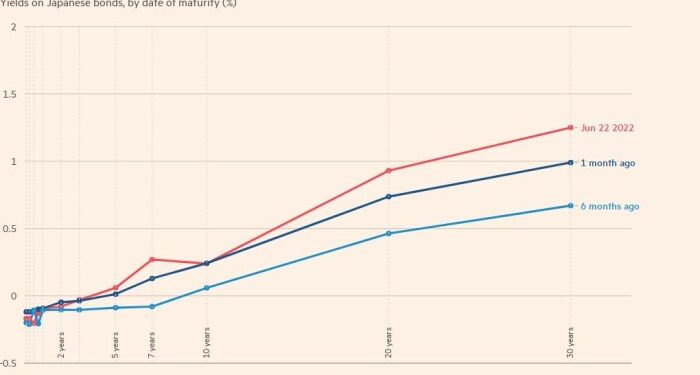 Investors are digging in for a battle with the Bank of Japan this summer, as they crank up bets that the global tide of rising inflation will goad the central bank into giving up its efforts to keep bond yields close to zero.

Foreign fund managers’ renewed enthusiasm for wagers against Japanese government bonds — a trade that has backfired so frequently over the past two decades it earned the nickname “widow-maker” — also puts them at odds with the majority of Japanese investors who think the BoJ will stick to its guns despite the collapse of the yen to a 24-year low.

At last week’s policy meeting, the Japanese central bank renewed its pledge to buy as much government debt as it takes to keep 10-year borrowing costs below 0.25 per cent. This commitment to so-called yield curve control, a long-standing feature of monetary policy in an economy that has for decades struggled to generate meaningful inflation, places Japan increasingly out of step with a headlong dash to higher interest rates around the world.

But pressure is growing on the BoJ to lighten its touch, with many investors entering short positions on Japanese government bonds (JGBs). Those bets on the debt’s price dropping would come good if the central bank allowed yields to rise above its current cap — a development that could add fresh impetus to this year’s protracted global bond sell-off. Bond prices fall as their yields rise.

“In a world where everyone is tightening, the BoJ is dancing to a different tune,” said James Athey, a senior bond portfolio manager at Abrdn. “You have to wonder how long they can keep this up, and when these things blow it tends to be dramatic.”

“If the BoJ is no longer acting as the anchor for bond markets then I think you get a bit of a global shock,” Athey added.

But the latest players in the widow-maker trade could be in for a long wait, according to Koichi Sugisaki, macro strategist at Morgan Stanley MUFG.

“The shorting of JGBs is from non-Japanese hedge funds,” he said. “Most Japanese investors do not see any possibility of near-term change in policy.”

Markets are flashing warning signs that the BoJ’s policy is coming under increasing strain. To defend its yield target, the central bank has so far in June been buying JGBs at a monthly rate of ¥20tn, double the pace seen at the previous peak of bond-buying in 2016, according to analysis by Deutsche Bank.

Aside from the 10-year yield, which is pinned by the BoJ’s policy, shorter and longer-term borrowing costs have been pulled upwards as global interest rates rise. Japan’s yield curve — the graph of its yields across increasing maturities — would usually be a smooth upward-sloping line. But it has developed a distinct kink around the 10-year point.

The BoJ has no theoretical limit on its ability to purchase government debt with freshly minted yen, but the growing yield gap with other developed economies has pushed the country’s currency to a 24-year low against the dollar.

The yen’s 16 per cent decline against the dollar so far this year has repeatedly put the government and central bank on the spot. So far, their response has been to express concern over the speed of the decline — but not its actual level. That position may come under intensified pressure over the next two weeks as Japanese politicians begin campaigning for an upper house election where imported inflation and the strain on households will top the agenda.

Japan has so far avoided the worst of the global surge in prices that has accompanied the recovery from the Covid-19 pandemic and been exacerbated by Russia’s invasion of Ukraine. Even though inflation climbed to a seven-year high of 2.5 per cent in April, the BoJ has remained far more confident than its counterparts in the US and Europe that price rises are transitory.

Still, some investors think the weak yen, which pushes up the cost of imports, will keep inflation higher for longer and make it tough for the BoJ to stick to the transitory mantra.

“The BoJ has won its battle with inflation, and monetary policy can now be normalised,” said Naruhisa Nakagawa, founder of hedge fund Caygan Capital, which is shorting JGBs.

The BoJ would be unlikely to flag an abandonment or relaxation of yield curve control in advance, in fear of giving investors the green light to dump JGBs en masse.

“When a shift in policy comes almost by definition it has to come out of the blue,” said Mark Dowding, chief investment officer of BlueBay Asset Management, which currently has a “sizeable” short position in JGBs. Dowding believes a series of inflation readings above its 2 per cent target over the coming months could persuade the BoJ to change tack, and argues the central bank may be reluctant to simply shift its yield cap higher, inviting market pressure on the new target.

“Once it’s no longer a sacrosanct line in the sand and more of a moveable target you risk making life very hard for yourself.” Instead, the BoJ may prefer to scrap yield curve control entirely, which could see the 10-year yield leap to around 0.75 per cent, Dowding thinks.

Fund managers like Dowding argue that upward pressure on global yields makes a big JGB rally unlikely, limiting their downside even if the BoJ stands firm.

“We like the asymmetry,” said Peter Fitzgerald, chief investment officer for multi-asset and macro at Aviva Investors, who is also betting on higher JGB yields. “If you are wrong, it’s not a huge opportunity cost.”

But the short-JGB trade’s reputation for frustrating generations of investors is enough to keep others away.

“I don’t think it’s a place to go in any material way,” said Kate El-Hillow, chief investment officer at Russell Investments. “I just have the word widow-maker in my mind. I think it’s there for a reason.”

Singapore regulator vows to be ‘unrelentingly hard’ on crypto

Singapore regulator vows to be ‘unrelentingly hard’ on crypto