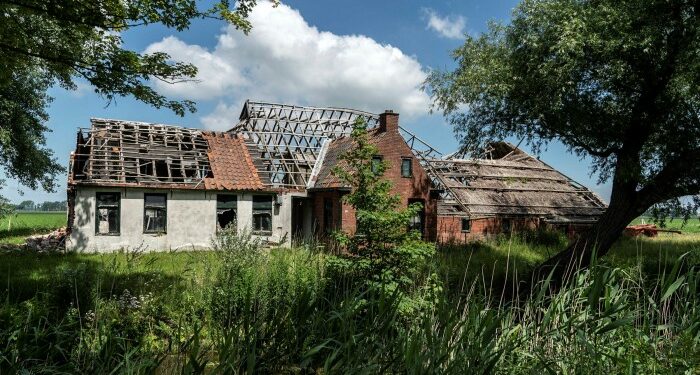 Damaging earth tremors linked to the giant Groningen gasfield in the Netherlands have plagued local residents such as Laurens Mengerink for a quarter of a century.

But asked whether the Dutch government should prolong production as a way to limit Europe’s reliance on Russian gas he has a simple answer: “Yes.”

“It’s an opportunity to be independent of Russia. That’s OK by me,” the 64-year old told the Financial Times from his home that is propped up by wooden struts after it was damaged by a series of quakes triggered by the extraction process.

The future of the Groningen field in the far north-east corner of the country has taken on new importance since Russia’s full invasion of Ukraine in February exacerbated a surge in energy prices.

Groningen, the biggest of its kind in Europe, pumped out more than 50bn cubic metres of gas at its production peak nearly a decade ago. But the field is set to close at the end of September because of the quakes that have led to more than 160,000 damages claims to date.

Russia’s move this month to sharply limit the amount of gas it sends to western Europe — and warnings that it may cut off supplies completely by the winter — has only added fuel to the debate. Groningen holds enough gas to replace three years of Russian supplies to the EU.

Despite the pressure, the Dutch government has been reluctant to increase production again. This week it decided to curb usage and allow the burning of more coal, rather than use Groningen.

“Only if a safety situation arises that is so serious that you can weigh it up against the safety of the people of Groningen — such as if we can no longer heat our hospitals or households can no longer cook — will additional gas extraction in Groningen be an option,” Hans Vijlbrief, state secretary for mining, told newspaper NRC. “It’s dangerous.”

Tremors at the Groningen field, which opened in 1963, began in the 1980s as the soft local clay and sandstone began to shift. There were almost 100 at the peak in 2017, with some reaching 3.6 on the Richter scale. Even if production at the 900 sq km field stopped today the quakes would continue for at least a decade.

After initially ignoring the problem, the Dutch government forced operator NAM, a joint-venture between Shell and Exxon, to reduce production from 2013 and in 2018 announced the field would close.

Production has fallen from 54bn cubic metres (bcm) in 2013 to an expected 4.6 bcm this year. But there is still 450 bcm in reserves, and if Russia turned off the gas completely some believe the government would find it hard not to tap them. The Dutch government has always said gas could be extracted in 2023 and 2024 but only if it was needed to top up emergency storage.

The state and NAM have paid out nearly €1.5bn in compensation to affected residents and to fund the reinforcement or rebuilding of homes in the area.

But only about 4,000 of the 26,000 vulnerable properties are protected after years of disputes over the extent to which extraction is responsible, according to Groningen Gas Council, which represents the community. It has calculated that €5.3bn would be spent by 2027 on reinforcing homes in the area.

Mengerink has waited years for his home to be rebuilt. A 2003 quake damaged his outhouses but he was able to fix them using €3,000 of compensation. Then in 2014 another hit. The cracks got worse in 2019 and builders were called to install the struts. “They were shocked. They said it could fall down,” he recalled. One neighbour sold up in frustration.

The pace of work has increased since a new body was set up in 2020 to act as a clearing house for claims. It has received just over 163,000 claims to date.

Jan Wigboldus, head of the Groningen Gas Council, is another whose life has been turned upside down since a quake struck his farmhouse a decade ago. “When it rained the other day I had buckets and towels on the floor as it was coming through the roof,” he said over coffee in the village hall in the nearby village of Garmerwolde.

He has finally been given the money and approval to build a new earthquake-proof property on his land. And while no one has been badly hurt in a quake, tens of thousands live in constant fear, he stressed.

Yet even he supports increasing gas production in the case of an emergency. “If hospitals and old people’s homes are going to be cold then we have to restart gas extraction,” he said.

Public sentiment is shifting as fast as the ground. A poll by Enigma Research in March found almost two-thirds of Groningen residents supported increased gas extraction up to a point. More than eight in 10 thought the Netherlands should stop importing Russian gas.

Local politicians, however, are less convinced. Tom Rustebiel, a councillor for the D66 liberal party, said he would “take a strong stance against it in any circumstances”.

Every party on Groningen council was working against it, he said, adding that a further 6,000 houses would need to be reinforced if the extraction continued. Rustebiel said that only six out of 600 people at D66’s annual conference over the weekend supported continuing extraction.

Mirjam Wijnja, a local Green party councillor who was forced to sell her earthquake-damaged home, also opposed increasing production, calling instead for drastic cuts to power use, including switching off big industrial users, along with a huge drive to insulate homes to cut consumption.

“We have to accept the consequences of our actions. We should have reduced fossil fuel use years ago,” she said.

But, she added, politicians in Amsterdam and The Hague had never paid much attention to the relatively remote, sparsely populated east and could yet decide to increase production.

Did the Fed’s preferred measure of inflation cool in May?

Did the Fed’s preferred measure of inflation cool in May?