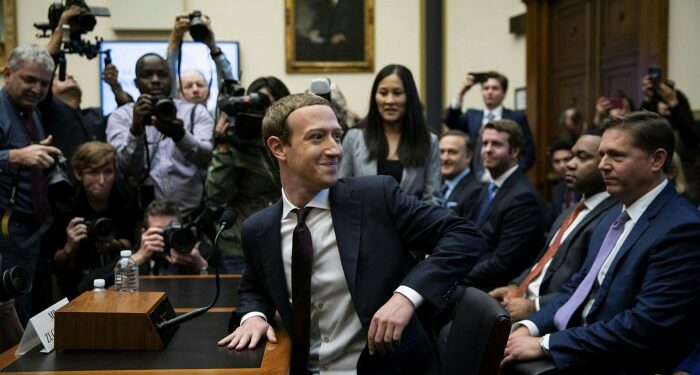 Facebook’s senior executives interfered to allow US politicians and celebrities to post whatever they wanted on its social network despite pleas from employees to stop, leaked internal documents suggest.

Employees claim in the documents that while Facebook has long insisted that it is politically neutral, it allowed rightwing figures to break rules designed to curb misinformation and harmful content, after being stung by accusations of bias from conservatives.

In September 2020, just ahead of the US presidential election, the author of an internal memo wrote that “director-level employees” had “written internally that they would prefer to formally exclude political considerations from the decision-making process”.

The author called for the company’s leadership to create a “firewall” around its content moderation teams to stop this from happening and to make sure Facebook did not keep up or take down posts because of external political and media pressure.

In another internal note, dated December 2020, an employee claimed that Facebook’s public policy team, blocked decisions to take down posts “when they see that they could harm powerful political actors”.

“In multiple cases the final judgment about whether a prominent post violates a certain written policy are made by senior executives, sometimes Mark Zuckerberg,” the author added, referring to Facebook’s chief executive. Parts of the note were previously reported by BuzzFeed.

In a further example from 2019, Zuckerberg was alleged to have been personally involved in a decision to allow a video that made the false claim that abortion is “never medically necessary”.

The post, which had been taken down by a moderator, was reinstated following complaints by Republican politicians, the document said.

The documents, part of a wider cache dubbed the Facebook Papers, were disclosed to US regulators and provided to Congress in redacted form by the legal counsel of whistleblower Frances Haugen. A consortium of news organisations, including the Financial Times, has obtained the redacted versions received by Congress.

Joe Osborne, a Facebook spokesperson, said: “At the heart of these stories is a premise which is false. Yes, we’re a business and we make profit, but the idea that we do so at the expense of people’s safety or wellbeing misunderstands where our own commercial interests lie. The truth is we’ve invested $13bn and have over 40,000 people to do one job: keep people safe on Facebook.”

A former Facebook executive told the FT that Zuckerberg had long told staff to aim for what he called “unimpeachable neutrality”.

This was important particularly around US political groups, employees were told, because the company did not want to be accused of breaking campaign rules by giving a donation in kind.

But three other former employees said they had observed how Facebook applied its own rules in an inconsistent and haphazard way, with special treatment for celebrities.

One former integrity team employee said: “For the people running Facebook, it seems like they care much more about not appearing biased than actually not being biased. Often their efforts at the former make the latter worse.”

In one memo published in July 2020, first reported by BuzzFeed, the company itself said it had decided not to reduce the distribution of “political publishers” ahead of the election but noted that such a move could risk “accusations of shadow-banning and/or FB bias against certain political entities” during the November vote.

Former president Donald Trump, who sued Facebook, Twitter and Google in July claiming that they unlawfully silence conservative voices, has for several years accused Facebook of bias, drawing on reports dating back as far as 2016 that the company’s editorial team was choosing not to prioritise news that would be interesting to conservatives.

Facebook did intervene to censor Trump — when he claimed that Covid-19 was “less lethal” than flu, for example.

But the December 2020 memo alleged that moves to take down “repeat offenders” were often reversed, having been “influenced by input from Public Policy”. The employee wrote that decisions were made to exempt “publishers on the grounds that they were “sensitive” or likely to retaliate”.

The note added: “In the US it appears that interventions have been almost exclusively on behalf of conservative publishers,” citing Breitbart, Diamond and Silk, Charlie Kirk and PragerU in particular as receiving special treatment.

In a leaving note, another employee involved in efforts to curb hate speech on the platform accused Facebook of giving special treatment to Breitbart, which has since 2018 been included on the company’s high-quality news tab. “We make special exceptions to our written policies for them and we even explicitly endorse them by including them as trusted partners in our core products,” the staffer said.

Creation of ‘internal oversight board’

The September 2020 memo urged the company to follow the lead of others, such as media outlets separating sales and editorial, and rival groups Twitter and Google, which have more distinct safety teams.

“It’s so obviously a conflict of interest,” one former employee from the integrity team told the FT. “They should be as far away from each other as possible, not reporting to the same bosses.”

Facebook also faced scrutiny recently after the Wall Street Journal reported that it has an internal system called “cross check” which was sometimes used to shield some high-profile users from enforcement even when they broke Facebook’s rules, a practice known as whitelisting.

The social media company has said it is working to clean up the system, which was initially designed to review content from politicians, celebrities and journalists to ensure posts were not mistakenly removed, but quickly ballooned to include millions of users. It has said it is phasing out the practice of whitelisting.

Joel Kaplan, the head of Facebook’s public policy team, previously said to the Washington Post that he had “consistently pushed for fair treatment of all publishers, irrespective of ideological viewpoint” and that there had never been a whitelist that exempts publishers specifically from the rules against misinformation.

Separately on Friday, another whistleblower filed a complaint to the Securities and Exchange Commission, first reported on by the Washington Post and reviewed by the FT, which alleged that Facebook’s public policy team would “over-index towards pleasing Trump and the Trump administration”.

Facebook has previously dismissed concerns of political influence exerted by certain figures, including Kaplan, on its decision-making. Kaplan did not immediately respond to a request for comment.