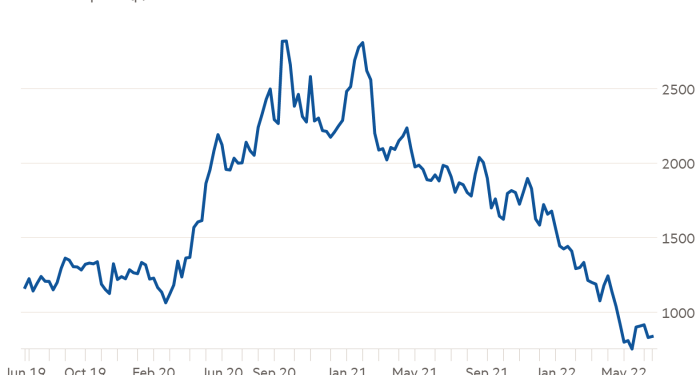 Ecommerce specialists Alibaba, DoorDash, Ocado and Shopify have steep falls in their share prices in common, but also a determination to prove they can still adapt their business models and expand.

The agreement is the first of its kind for DoorDash and the warehouses will handle delivery within 30 minutes for about 5,000-8,000 products sold under Loblaw’s President’s Choice brand. DoorDash shares are down around 58 per cent year to date and analysts say it may have more success being this kind of solutions provider than with its direct delivery business.

Ottawa-based Shopify, which provides software and services for independent retailers, has been keen to herald its growth opportunities after a year in which its shares have plummeted 75 per cent. On Wednesday, it announced a push into business-to-business sales, saying it would unlock opportunities “multiple times” bigger than its existing model. Its new tools are meant to make it easier for merchants to sell in bulk, and integrate with enterprise resource planning software used by companies to handle procurement.

The UK’s Ocado made an earlier than expected cash call on Monday, raising £575mn to fund the capital-intensive development of more of its automated “customer fulfilment centres”. Ocado started out as an online food retailer but is now more focused on selling its warehouse technology and expertise to supermarket groups overseas.

The £7.95 price of the shares issued was less than half the £19.60 paid by investors in its last fundraising in June 2020. Its stock is down almost 50 per cent this year.

Alibaba, whose shares have fallen 50 per cent over the past 12 months, is looking again to international expansion as a growth engine after suffering setbacks in China. Our reporters in Pakistan and China reveal how Daraz, the ecommerce company it acquired in 2018, is allowing it to grow in South Asia after it had effectively been shut out of India by geopolitical tensions.

1. ARM IPO may be a national security issue
The UK government has debated the use of national security legislation as a means to convince SoftBank to list chip designer Arm in London. Two people familiar with internal government discussions said it had weighed applying the UK’s new National Security and Investment Act but had not formally done so.

3. DeFi’s centralised response to crypto crash
Three decentralised finance groups — Maker DAO, Bancor and Solend — have stepped in with emergency plans to protect their projects and users from economic pain in the face of tumbling cryptocurrency prices. The moves are a vindication for global regulators, who have warned that some DeFi projects were more centralised than their marketing indicated, reports Scott Chipolina.

4. Kleo partners’ disconnection
Today’s Big Read analyses the collapse of the Kleo Connect joint venture to deploy hundreds of low-earth orbit satellites. Its German partners accuse Chinese investors of trying to steal the licences for use in their home country. However, the Chinese backers argue the Germans eagerly took their money only to conspire behind their backs to sell the licences to a new bidder in the US, with links to Republican donors and the Pentagon.

5. Supercars’ slow shift to electric
Ferrari, Lamborghini, Aston Martin and McLaren have been singularly slow to move away from the powerful, hungry engines that are the soul of their vehicles, with not one supercar sold last year being fully electric. Peter Campbell reports on how changing customer attitudes are finally making them shift gear.

Huawei launched in the UK its first all-in-one desktop PC today, with the MateStation X now available for a penny short of £1,800. It’s a very clean design, with no ports visible on the back of a 28.2in 4K+ display, which can be easily tilted to a comfortable angle. Its three-speaker system suggests decent sound and it comes with a wireless mouse and a keyboard that provides fingerprint access.