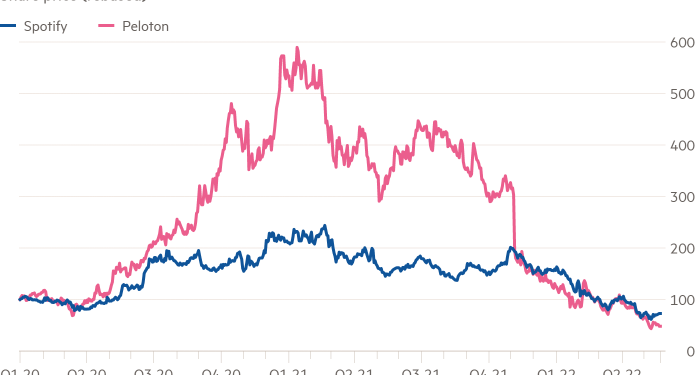 Convertible bonds sold by high-flying tech companies last year have plummeted, in a stark illustration of how turbulence sweeping financial markets has dented the appeal of some of the stars of the pandemic.

Spotify and Peloton were among a clutch of companies that sold convertible debt, a type of bond that can convert into equity, at the top of the market. However, those bonds are now sinking in price as the prospect dims that shares in the companies will reach the lofty levels needed to allow the debt to morph into equity.

The fall in convertible bonds highlights the abrupt shift in market sentiment away from the investments that thrived during the boom in financial markets from early 2020 to January of this year.

US stocks last week briefly slipped into bear market territory, with the blue-chip S&P 500 index down 20 per cent from its January record high, while shares in companies whose valuations were pinned on big profits years from now have fared much worse.

The falls have come as the Federal Reserve has this year begun unwinding stimulus measures, including historically low interest rates, that helped fuel big gains in financial markets from the depths of the coronavirus crisis.

Tech issuers, fresh off a pandemic-induced run-up in their stock prices, had flooded the market with convertible bonds during 2021 — often capitalising on their popularity with shareholders by offering no coupon at all, meaning they did not have to pay any interest on the debt.

“It became somewhat fashionable to go out and get a zero-coupon bond done,” said Craig McCracken co-head of equity capital markets at Wells Fargo. “What are the top two things that have changed? The first is the rise in rates and the second is the fall in stock markets.”

Convertible bonds start out looking much like other corporate bonds. But they include a preset price at which investors can choose to turn the debt into equity. Companies are typically drawn to this type of debt because it allows them to avoid diluting other shareholders until their stock’s price has risen high enough to trigger the conversion.

The debt also usually comes with a lower borrowing cost in exchange for bond investors getting access to higher, equity-like returns if the company performs well. Investors buy the debt because it allows them to convert into equity if prices rise while limiting the potential for losses should the stock market’s ascent begin to falter.

In February last year, home fitness company Peloton raised $1bn with a zero-coupon convertible bond. On the day it was sold, the company’s share price closed just shy of $150. The bond sold with a strike price of almost $240 before investors would be able to convert to equity, a further rise of more than 60 per cent at the time. Yet the stock has now fallen to less than $14. It would need to rise roughly 1,600 per cent before it matures in 2026 to trigger the conversion price.

Spotify, whose stock has tumbled more than 50 per cent this year to $109, sold its zero-coupon bond at the end of February last year with a strike price of $515. Consumer lender Affirm sold one of the last zero-coupon bonds of the year in November within weeks of its stock price reaching a record closing price of $168.52. It has since sunk to less than $25, well off its conversion price of just above $215.

In each case, the value of the convertible bonds has slumped to reflect the declines in the stock market. Affirm’s bond now trades about 60 cents on the dollar, while Peloton’s has dipped to 70 cents. Spotify’s bond has performed slightly better, falling to 80 cents.

Investors noted that the fall in the bonds’ values pales in comparison to the drops in some companies’ stock prices.

Some other zero-coupon convertible bonds issued last year have also held up better. Ford sold a convertible bond in March last year with a strike price just above $17. Shares have since then reached a closing high of $25.19 before sliding back to around $12 this year — in line with its stock price when the bond was issued.

“The idea of convertibles is winning by not losing,” said Tracy Maitland, founder of convertible bond focused Advent Capital. “Peloton stock may never go back up again, but if I can hold on for a few more years in the convert, at least I’ll get my money back.”