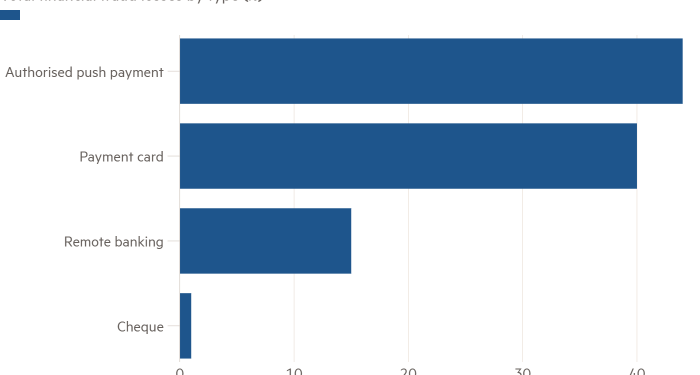 The UK is facing an “epidemic of fraud”, driven by a surge of scams where victims are tricked into sending cash to fraudsters’ accounts, according to a financial services trade body.

The more than £580mn lost in 2021 in this type of scam known as authorised push payment fraud — a 40 per cent increase, year on year — reflects criminals’ efforts to exploit the pandemic, according to a report by UK Finance published on Wednesday.

“Fraudsters have become increasingly adept at adapting their methods to suit changes in our lifestyles and in consumer behaviour. We can only tackle this through effective co-ordinated action,” said Katy Worobec, UK Finance’s managing director for economic crime.

“We need continued efforts from government and other sectors to tackle what is now a national security threat.”

Overall losses to fraud in the UK rose to £1.3bn in 2021 compared with £1.2bn in 2020. About 44 per cent of the total came from authorised push payment fraud, according to the findings, while 40 per cent involved payment cards, including counterfeits.

An additional 15 per cent came from remote banking transactions, made via the internet, phone or mobile apps.

Of the almost 200,000 cases of authorised push payment fraud reported by UK Finance members, “purchase scams” — in which victims pay for goods or services that they never receive — were the most common, making up almost half of cases.

However, investment scams caused the greatest losses. Scammers took £171.7mn from victims for fictitious investments — in items such as gold, property and cryptocurrencies — despite only accounting for about 5 per cent of cases.

Many of these scams begin on online platforms, but can also come via email or even letters. Fraudsters sometimes masquerade as trusted financial content creators to gain victims’ trust.

Pressure has been growing on social media companies to rein in online fraudsters. In April last year, big banks and telecoms companies formed Stop Scams UK, a group to push tech giants to help fight financial crime, with Meta, Google and Microsoft among those who have joined.

Online platforms would also face a duty of care to protect their users from fraud under the online safety bill introduced in parliament in March.

“We’ve seen a lot of things do start on these platforms — what I would really like to see is collaboration in order to close down these opportunities before they hit the customer,” said Worobec. “We’ve got to stop the fraud, not argue about who pays at the other end.”

Scams involving the impersonation of police or bank staff were the second-highest category in terms of value, with £137.3mn lost to these forms of fraud. This represented an increase of more than 50 per cent on 2020 levels.

UK Finance found a growing trend in scammers asking for upfront payments for fake loans, as well as for fees to access overseas lottery funds or items held at customs.

Lloyds Bank issued a warning last month that advanced fee loan scams had almost doubled in the year to date, with victims losing on average more than £200.

“As living costs rise, fraudsters are increasingly turning to advance fee scams,” said Liz Ziegler, Lloyds’ retail fraud and financial crime director. “They know that some people will need more support with their money, and victims in these cases often have a poor credit score or may already be in financial difficulty.”

Most high street banks are signatories to a voluntary code set up in May 2019 designed to improve compensation for victims of online fraud. But in 2021, only £238.1mn of authorised push payment losses were returned to victims by lenders under the code.

The government said the way in which the code was applied was “inconsistent”, with varying levels of compensation among banks endorsing the code.

In May, ministers announced plans to allow the Payment Systems Regulator, which sets rules for banks and other payment service providers, to force banks to offer compensation to authorised push payment fraud victims.