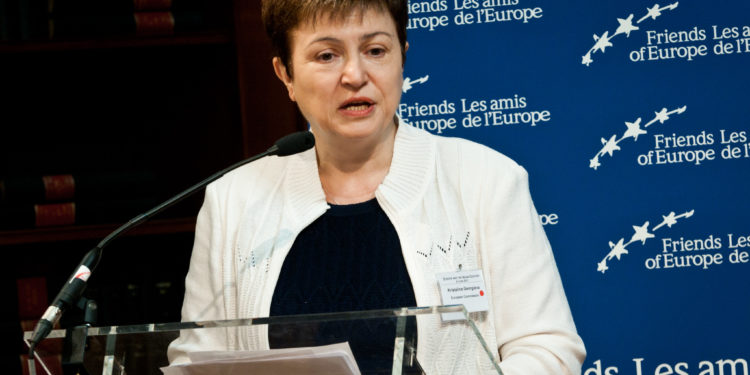 Kristalina Georgieva also expressed her delight seeing that world leaders are realizing that a coordinated effort can quell the effects of COVID-19. Photo: Friends of Europe | Flickr | CC BY 2.0

The COVID-19 has brought the global economy to a recession, International Monetary Fund (IMF) chief Kristalina Georgieva said Friday. However, she also noted that she’s delighted how world leaders are starting to realize that coordinated effort to fight against the pandemic is what is needed.

“We have stated that the world is now in recession and that the length and depth of this recession depend on two things: Containing the virus and having an effective, coordinated response to the crisis,” Georgieva told reporters from CNBC.

“I’m very encouraged by what I see now. I see a much clearer understanding [among global leaders] that if we don’t beat it everywhere, we won’t be able to get out of it.”

The IMF chief also said that this is the first time that we have seen the world economy in a standstill. “We should not go … with small measures now when we know that it is a gigantic crisis,” she added. “We’ve never seen the world economy standing still. Now we [do]. How we go about revitalizing it is another important topic.”

Back in February, Georgieva echoed the warnings of other economists and market analysts regarding the possible effects of the coronavirus outbreak on the world economy.

Georgieva said that the unfortunate global health emergency that “we did not anticipate in January” has become one of the world economic threats atop other threats like the US-China trade war and Brexit. This is a potent reminder, according to the IMF head, of “how a fragile recovery could be threatened by unforeseen events.”

“If the disruptions from the virus end quickly, we expect the Chinese economy to bounce back soon. The result would be a sharp drop in GDP growth in China in the first quarter of 2020, but only a small reduction for the entire year. Spillovers to other countries would remain relatively minor and short-lived, mostly through temporary supply chain disruptions, tourism, and travel restrictions,” Georgieva noted.