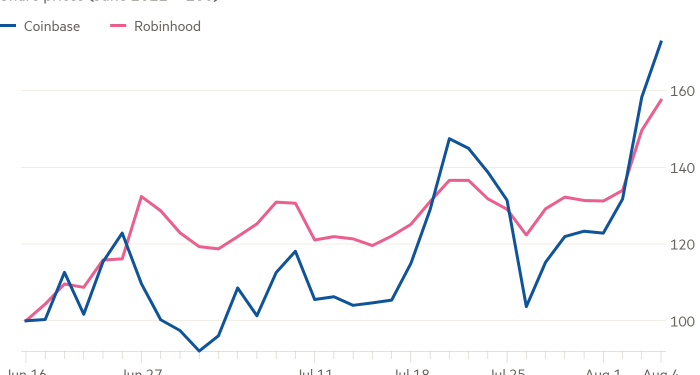 Good morning. Ethan here, welcoming you to jobs day. If today’s payrolls number comes in much lower than the expected 250,000, markets will probably overreact. By all indications the labour market is cooling, but not that fast. Unemployment claims are rising very gently and plenty of people are still quitting their jobs. Let’s all just take the data calmly and enjoy the weekend. Email us: ethan.wu@ft.com and katie.martin@ft.com.

Stock-based pay isn’t so nice in a down market

Coinbase and Robinhood both listed on public markets during last year’s bull run. Both rode the crypto and meme stock wave. And both stocks are now sitting with peak-to-trough declines of more than 85 per cent.

Things have been a bit less dire lately. Coinbase stock leapt 10 per cent yesterday after it inked a deal to offer crypto prime broker services to investors who use BlackRock’s popular risk-management software. Robinhood had a 15 per cent rally on Wednesday after laying off a fifth of its staff, which many took as a sign the company was duly focused on cost-cutting. All told, recent price performance hasn’t been half bad (though it still looks like a small upward blip on a longer-term chart):

This feels weird. Crypto trading volume is still down a lot, and falling. Coinbase is in a possibly existential dispute with the SEC over whether cryptocurrencies are securities. Robinhood is still lossmaking with a business model that doesn’t look as growthy as it once did. Why are some investors buying the dip?

Valuations are part of the story. The companies’ price-to-sales ratios, a typical valuation metric for immature tech businesses, have fallen hard. After its IPO in 2021, Robinhood’s P/S ratio (calculated as market cap divided by revenue) was about 25; now it’s closer to five. Coinbase’s has gone from 24 to two. Perhaps some investors figure the worst is over and want to snag a discount.

But Kenneth Worthington and Michael Cho, two analysts at JPMorgan, think investors could be overlooking a big threat to Coinbase and Robinhood’s share prices: dilution from stock-based compensation (SBC).

Here’s how that works. SBC is great when markets are bouncy and stinks when markets fall. You can think of it as creating hidden leverage, as Jamie Powell put it in an excellent FT Alphaville post back in February. To sum up the basic mechanics:

Worthington and Cho estimate in a recent note that Coinbase pays out 35 per cent of total compensation in stock. For Robinhood, that number is 50 per cent. In a down market, this is obviously bad news for employees. (A friend at a big San Francisco fintech says grumbling about the plunging value of stock compensation is commonplace.)

It could also be bad for outside shareholders. If Robinhood and Coinbase continue with current SBC levels — even after cutting staff — a swelling share count would destroy shareholder value. In an optimistic scenario assuming 3.5 per cent dilution per year for five years, Worthington and Cho calculate that value per share would be 16 per cent lower than if share count were kept constant. Nor are the companies’ other options much better. They write:

In the extreme, you can imagine a death spiral scenario where worse pay creates a talent exodus, making the business worse, which lowers the stock price, and so on. It’s hard to know how likely this is, but the risk is probably lower for Coinbase than Robinhood, simply because Coinbase appears to have massively over-hired.

The punchline is that stocks which have fallen 60-90 per cent from the frothiest heights of the bull market can always keep on falling. Investors, it seems, are only now realising what they’ve bought.

Sometimes, sellside researchers at banks make boring claims like “the labour market will have to get somewhat less tight to lower services inflation”. And sometimes, leftwing outlets breathlessly publish the research as if it were the Pentagon Papers. Alexandra Scaggs (who is editing Unhedged this week, thanks Alex!) has more.