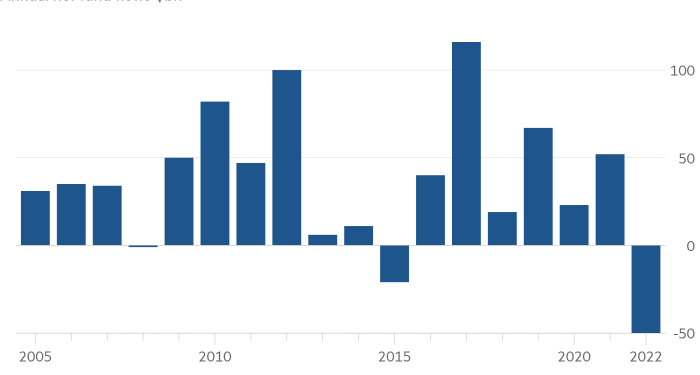 Investors have pulled $50bn from emerging market bond funds this year in the latest sign of how a sharp tightening of monetary policy in developed economies and the war in Ukraine has sparked a flight from the asset class.

The net outflows from EM fixed income funds are the most severe in at least 17 years, far worse than were recorded during a bout of acute concern about China’s economy in 2015, data collated by JPMorgan show.

“It has been pretty dramatic,” said Marco Ruijer, emerging markets portfolio manager at William Blair, adding that the combination of soaring global inflation, tightening central bank monetary policy and Russia’s invasion of Ukraine has culminated in “a perfect storm” for emerging market debt.

The strong shift away from emerging market bonds, which are typically considered to be riskier than their developed market counterparts, has pulled prices sharply lower this year. The benchmark index of dollar-denominated emerging market sovereign bonds, the JPMorgan EMBI Global Diversified, has delivered total returns of minus 18.6 per cent in 2022, leaving it on track for its worst annual run on record.

Emerging markets had already been suffering disproportionately from strained finances amid the coronavirus pandemic even before this year’s headwinds struck.

The Federal Reserve’s rate rises this year, and plans for more in the offing, are particularly toxic to emerging markets, because they have increased the fixed returns investors can earn from holding ultra-safe US debt, eroding some of the appeal of bonds sold by issuers with weaker credit profiles. Some investors are also worried that tighter US monetary policy and growing economic pressure in other big markets such as Germany and Italy have heightened the risks of a broad economic downturn.

“Before the Fed started hiking the asset class was not doing great [and then] the market started turning a bit to fear a recession, which caused another sell-off,” added Ruijer.

The global shock to commodity prices triggered by Russia’s war in Ukraine has been a boon to some raw material-exporting developing countries. “A large part of our universe are commodity exporters so a lot of those countries are having a windfall,” said Ruijer.

However, big energy importers such as Turkey are facing a severe blow from the rising cost of raw materials such as oil. Since most commodities are priced in dollars, a weakening of emerging market countries’ currencies against the greenback amplifies these cost pressures.

Ruijer added that while opportunities exist, the gloomy global economic outlook and expectation that commodity prices will sink due to a recession means investors have been “push[ing] the sell button”.

“These assets tend to be quite positively correlated with the economic cycle,” said Cristian Maggio, head of emerging markets strategy at TD Securities. He added that investors have been “deterred from having large exposure to emerging markets by the fact that growth prospects are deteriorating by the day”.