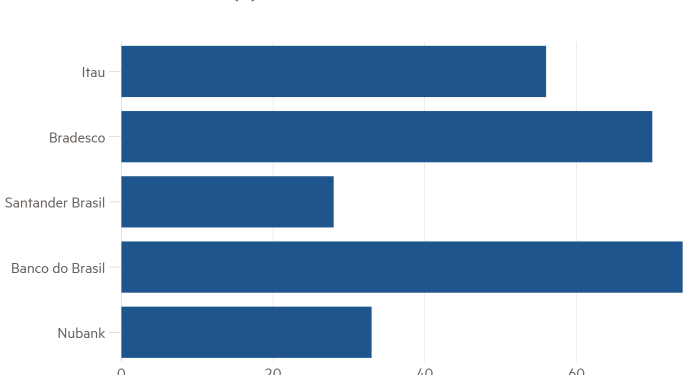 Backed by legendary investor Warren Buffett, with more than 40m customers and Brazil’s biggest pop star on its board, Nubank is on the rise.

After hitting a $30bn valuation in a funding round earlier this year, the Latin American start-up on Wednesday filed for an initial public offering in the US that could seal its place among the world’s hottest financial technology companies.

Founded in 2013, the São Paulo-based group began offering a zero-fee credit card managed by a mobile app, before moving into free digital accounts.

Its way of doing business has come as a welcome change in Brazil. The country’s bureaucratic banking industry has traditionally levied high interest rates and charges for basic services and left swaths of the population excluded. But in a tech sector where the line between vision and hype is often blurry, Nubank will have to convince stock market investors that it justifies the buzz.

Having expanded into Mexico and Colombia, the company has claimed to be the largest independent digital bank outside Asia by customer numbers.

Nubank executives declined to be interviewed. But its mission to take on the big banks and promote financial inclusion was captured recently by chief executive David Vélez on LinkedIn, where he posted: “First they ignore you, then they laugh at you, then they fight you, then you win”.

A successful float would be another achievement for Brazil’s booming start-up scene, which has more than a dozen “unicorns” — privately owned companies valued at more than $1bn — according to data provider CB Insights.

The number of shares to be sold and the price range of the proposed IPO have not yet been determined, said Nu Holdings, the controlling entity which submitted the filing. It also intends to have Brazilian depositary receipts traded on the São Paulo bourse.

Nubank was born out of Colombian co-founder Vélez’s frustration when trying to open a bank account in Brazil while an executive at Sequoia Capital. The Silicon Valley venture capital firm — known for its bets on Google, PayPal and ByteDance — would provide seed investment.

Several former employees, who asked not to be named, spoke of a focus on customer service, data science and innovation. Yet they also described a culture of perfectionism that has sometimes slowed product launches.

Joelson Sampaio, a professor of finance at the Getulio Vargas Institute, said Nubank’s biggest impact has been to bring more competition to Brazilian banking.

“The removal of fees, ease of interaction with the technological platform, with more accessible and less distant communication between the bank and the customer — all this facilitated and innovated service,” he said.

Since first launching its distinctive purple cards, Nubank has sought to evolve into a full-service financial institution. Today, it provides personal loans, savings and business accounts, insurance and, through acquisition, has entered investment products.

According to analysis by brokerage XP based on central bank data, the company has built a 5.4 per cent share of Brazil’s retail credit card market. Its ambitions are underscored by an internal goal of reaching 100m “fanatical” clients.

However, glitches have come along the way. Users have complained of disrupted services on several occasions in 2021, with reports of the app being down and some people temporarily unable to pay bills or make transfers. Nubank did not respond to questions about these incidents.

The company also drew attention this year with the unorthodox board appointment of Anitta, a popular 28-year-old singer.

Debt rating agency S&P upgraded Nubank by three notches to brAA-following its latest capital raise and highlighted its “resilience in the face of the impacts from the Covid-19 pandemic”.

“Our base case in 2021 is they will break even and we expect profitability to gradually improve going forward,” said S&P analyst Guilherme Machado. “They have a much more mature [credit] portfolio right now, which should be able to readily result in positive bottom-line results.”

But not everyone is happy. Last month, the company — which in spite of its name does not have a full banking licence — found itself dragged into a social media row between Brazil’s fintechs and its established lenders over fees and who offers cheaper borrowing rates.

Yet if Nubank has rattled Brazil’s five dominant banks, it has also perhaps forced them to accelerate reforms. Many have closed branches to reduce costs.

At the same time, a flock of rival upstarts are snapping at Nubank’s heels. These include C6, a unicorn that is 40 per cent owned by JPMorgan since June and valued at just over $5bn, according to CB Insights.

“Nubank today is a trendsetter and every product it launches will soon be copied and maybe improved a little by some contenders,” said former employee André Diniz Bégio, who worked in business development. “The market will always be catching up with Nubank. If it becomes too confident, this could become a trap.”

What the latest iPhone reveals about Apple’s strategy

What the latest iPhone reveals about Apple’s strategy