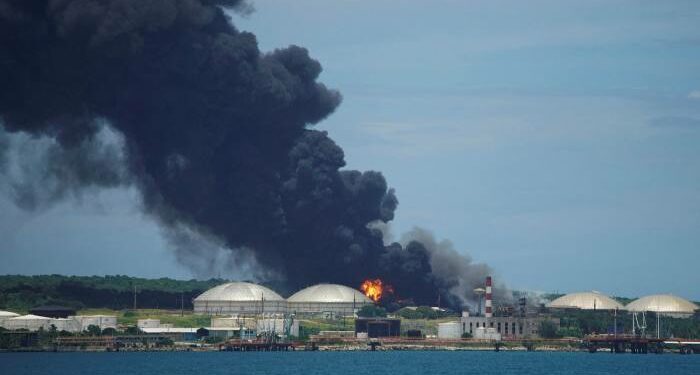 Cuban firefighters were joined by Mexican and Venezuelan reinforcements on Sunday to battle a blaze at the Matanzas supertanker port and storage facility, which threatened to cut off electricity supply across the island.

On Friday, a lightning strike ignited one of eight tanks, with a capacity of 300,000 barrels of petroleum products, at the Matanzas facility, which receives crude oil, diesel and fuel oil shipments from international markets.

A second tank caught fire on Saturday, injuring more than 100 people, including first responders, according to Reuters. Firefighters tried to cool the tanks with seawater to prevent further explosions, according to the Matanzas government.

The fire at the port comes as the communist-ruled island has been suffering blackouts with power plants failing from shortages of fuel and a lack of maintenance.

The explosions sent towering fireballs skyward and thick smoke billowed from the facility. Officials reported 17 firefighters missing after the initial explosion, before thousands of residents were evacuated from the region, about 85km east of Havana. The public health ministry reported on Sunday that 24 people were still in hospital, with five in a critical condition.

“There is no history of a fire of such magnitude at the supertanker base,” President Miguel Díaz-Canel said on Saturday. “There are still hard days of work ahead . . . To the extent that we can put out the fire, we can start searching for the missing.”

Díaz-Canel thanked Mexico, Venezuela, Russia, Argentina and Chile for having “offered solidarity [and] material assistance in the face of this complex situation”. He also thanked the US for offering technical help.

Teams experienced in fighting fuel fires arrived over the weekend from Mexico and Venezuela. Mexico sent more than 80 personnel from its military and state oil company Pemex, along with three helicopters, while Venezuelan oil minister Tareck El Aissami announced the country was sending 35 specialists from state oil group PDVSA along with 20 tonnes of firefighting material.

Fuel received and stored at the Matanzas supertanker base is used to power six of Cuba’s eight thermoelectric plants, according to Jorge Piñón, a Cuban energy expert at the University of Texas at Austin. “This is the cornerstone of Cuba’s oil logistics system,” Piñón said.

The docks at the Matanzas facilities, on the north coast between the capital Havana and the resort of Varadero, have not been affected by the inferno, Piñón said. However, he added: “If you don’t have a place to put the oil, what good are the docks?”

Cuba produces an estimated 40,000 barrels of oil daily, but must import another 80,000, mostly from Venezuela, to meet its needs, Piñón said.