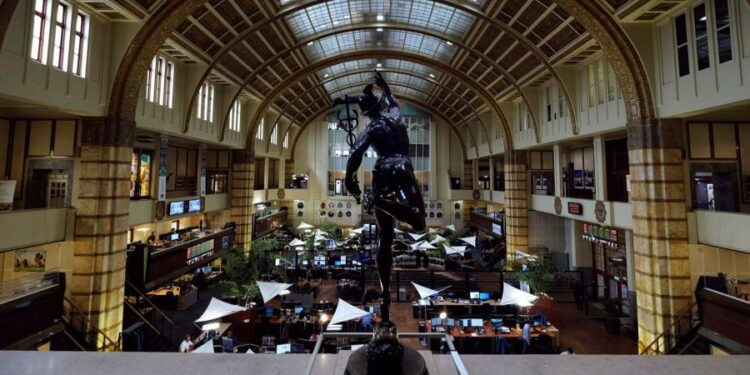 European stocks and Wall Street futures declined on Friday as traders assessed how the end of pandemic-era monetary stimulus might pressure equity markets.

The regional Stoxx 600 Europe index fell 1 per cent by early afternoon in London while the UK’s FTSE 100 was down 0.4 per cent.

Officials at the US Federal Reserve, whose main funds rate affects borrowing costs and stock market valuations worldwide, have also signalled their support for the first interest rate rise of the pandemic era in March.

The Stoxx technology sub-index was one of the worst performers in Europe on Friday, dropping 1.7 per cent.

Ultra-low interest rates can boost tech and other high-growth stocks by lowering the discount rate professional investors use to value equities, which in turn makes cash flows expected far into the future more valuable.

Swaps markets have priced in a gradual pace of increases, with the funds rate ending the year at 1 per cent or below. But equity investors who enjoyed double-digit gains in the past two years are querying whether such projections are too optimistic.

“The markets are in this period of transition which of course always goes with some doubts,” said Geraldine Sundstrom, a managing director and portfolio manager at Pimco.

“We are moving from a time where inflation was deemed transitory and central banks would remain accommodative as far as the eye could see to a time when it is natural to expect some removal of monetary accommodation, but how much that should be is the big question mark for everyone,” she added.

US bank shares broadly fell in pre-market trading after JPMorgan Chase reported a fall in quarterly revenues at its trading business.

The dollar index, which measures the greenback against six other currencies, traded flat.

In an indication that Russian geopolitical tensions were beginning to seep into financial markets, Moscow’s benchmark Moex stock index was down 1.7 per cent, taking its weekly decline to more than 4 per cent.