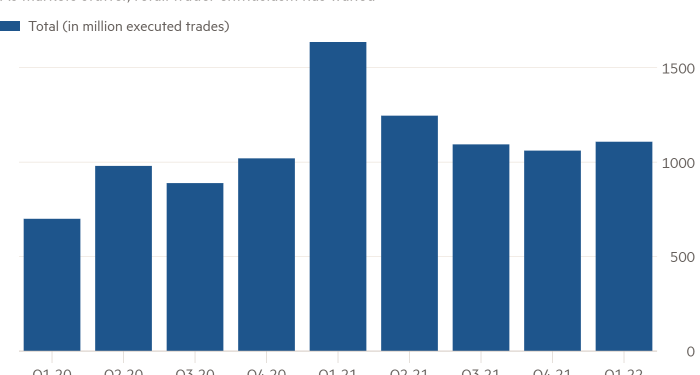 Both groups, which act as gateways for ordinary investors to buy and sell popular assets, are watching the most attractive areas of their rivals’ markets to counter the chill caused by this year’s drops in equity and crypto markets.

A surge of trading in stocks and cryptocurrencies among have-a-go investors last year provided a powerful but fleeting boom to brokerages, with high trading volumes and record-setting new customer sign-ups.

Inflation and rising interest rates have damped investor enthusiasm. The number of trades placed at traditional US brokerages plunged 32 per cent in the first quarter of 2022 compared to the previous year, according to analysis by BrokerChooser.

Backed by profits from a buoyant two years of pandemic trading, some crypto companies are investing in diversification into new markets.

Crypto exchange FTX will begin stock trading this year and has supplemented its strategy with purchases of equities clearing house Embed Financial and an undisclosed stake in IEX, the regulated stock exchange. Bitpanda, one of Europe’s largest exchanges, already lets customers buy stocks and ETFs.

Sam Bankman-Fried, FTX’s 30-year-old founder, has also seriously considered a more ambitious target: buying the memestock broker Robinhood to supercharge his company’s push into equities trading, according to people familiar with the matter. He paid $648mn for a 7.6 per cent personal stake in Robinhood, co-founded by 35-year-old Vlad Tenev, in May. FTX says no formal M&A talks have been held.

“A lot of the people who want to invest in crypto also want to invest in stocks . . . [adding stocks] makes the experience a lot cleaner,” Bankman-Fried said in an interview with the Financial Times, adding that he is “actively looking” at acquisitions.

He said the FTX is looking at buying companies that have either “strong brands and user bases” or else “a lot of . . . expertise with particular pieces of licensing that we don’t have as much background in”.

On the other side retail brokers are trying to stay competitive and attract new users in a market where commissions for trading shares are zero.

Robinhood began offering crypto trading in 2018, while Interactive Brokers, which handles approximately 9 per cent of the options volume in the US, has announced plans to enter the crypto space. Public.com lets users trade both shares and crypto.

Retail broker executives see an opportunity to get into the crypto market before US lawmakers set rules on trading digital assets.

“When the regulators come out with some rules it will be too late to be in the [crypto] markets the right way,” said Thomas Peterffy, the chair of Interactive Brokers. “It’s better to be in the markets already and adjust to the regulations . . . other brokers will go into crypto soon as well, provided that crypto is also still a thing.”

But both sides face obstacles to making the breakthrough in each other’s market.

Bolting technology that is designed for crypto trading on to existing share platforms may not be straightforward. “When companies now want to offer crypto, they have one huge problem. If they build it themselves, they will have a product that is like it’s in 2017,” said Eric Demuth, co-founder and chief executive of Bitpanda.

The market for retail share trading in the US is also shifting as the economics underpinning business models changes.

Retail brokers’ business model is under scrutiny from regulators, particularly over the practice of payment-for-order flow. Brokers such as Schwab and Robinhood sell their customers’ orders to intermediaries like Citadel Securities and Virtu — and they earned more than $3.8bn last year in payments for their orders.

FTX has already said that it will not sell its order flow to market makers when it begins share trading and said profitability is not its prime concern.

Bankman-Fried argues the brokerage industry is ripe for consolidation. “You have thousands of mobile brokers, most of whom are doing nothing but providing a mobile app that connects to payment for order flow,” he said.

At the same time interest rates have risen to their highest levels in more than a decade, enabling brokers to collect interest and generate revenues from large account balances. That has helped offset declines from trading revenues.

That may favour larger incumbents who have large and established customer bases.

“There’s significant revenue upside to the big brokers where the customers have a lot of cash, namely Schwab and Interactive Brokers,” said Rich Repetto, an analyst at Piper Sandler.

Illustrating Robinhood’s efforts to increase account balances, the group told customers in June it would give them as much as $800 to transfer their assets on to the platform, and reimburse them for up to $75 in exit fees from other brokerages.

Though Robinhood’s revenue per account has fallen to $53 per account — analysts note it could be attractive not for its profitability, but rather as a tech company given its sleek user experience and success onboarding customers. A big offer may prove irresistible.

“If there is a large player that is cash rich jumping into the market . . . For the brokerage firms, it’s going to be tough,” said Yorick Naeff, chief executive of Dutch neobroker BUX, which also offers crypto.