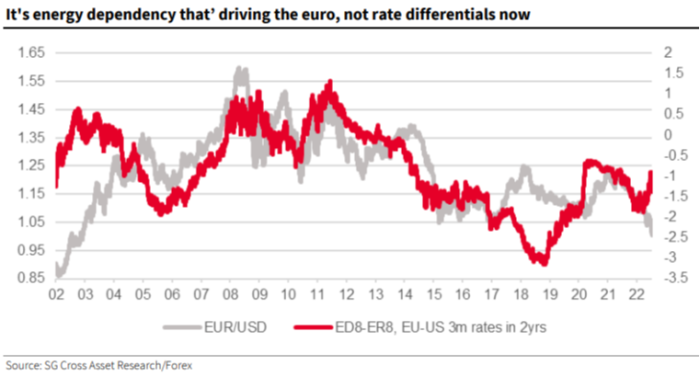 Journalists are unmatched in their appreciation of a round number. That’s why your newsfeed is about to be clogged with stories marking the euro hitting parity with the dollar for the first time since December 2002.

The second paragraph of the story will probably say something about how the euro’s down more than 12 per cent this year as investors chose the greenback over riskier assets. Worries about aggressive central bank tightening amid inflationary pressures have triggered a flight to safety, it’ll continue, before quoting some strategist or other about how there’s definitely probably a ~50 per cent chance of imminent recession.

Such formulas are applied because the euro’s hitting parity on a data-free day, so everything has to look backwards. It’s worth bearing in mind, however, that by far the most significant event in the rear view mirror is Russia’s tightening of gas flows.

Whereas a widening of peripheral spreads hurt the euro in April and May, the big concern since mid June is the more than doubling of regional gas prices. In that context, recent market moves can only really be explained by deteriorating growth expectations as Russia turns the screw. Here’s how SocGen’s Kit Juckes frames it:

And because we’re all about gas, not monetary policy or investor sentiment, it’s almost impossible to talk about euro support levels. JP Morgan will give it a go though:

Over at Goldman Sachs, they reckon that for every 1 percentage point fall in euro area growth expectations it’s only 2 per cent off the euro. By Goldman maths, the fuel crisis has cut year-ahead GDP of about 0.75 of a percentage point, which would match the euro’s move in recent weeks.

Deterioration also makes the worst case scenario more likely, however, and that’s not yet in the price:

Unusually, this is mostly being driven by real money. Nomura makes the point that forced gas buying is driving FX flows so the euro should be less prone to headline-generated short squeezes.

Without speculative cash in the mix, any positive news on the Nord Stream One pipeline might not provide much more than a temporary relief rally.

The bigger thing to worry about now is euro area manufacturing competitiveness, particularly if China locks down again. Energy costs for European companies are already a multiple of US rates and their supply chains beyond Belarus are effectively closed. Nomura’s base case is for the euro to weaken to $0.95 by the end of August — but if euro area manufacturing is forced to remain competitive at any cost, the devaluation could be much more severe:

For what it’s worth, here’s what Goldman thinks about the nearly definite probable ~50 per cent chance of imminent recession. What’s important isn’t the likelihood, it argues, but the type:

Biden’s ‘climate presidency’ is on the line

Biden’s ‘climate presidency’ is on the line